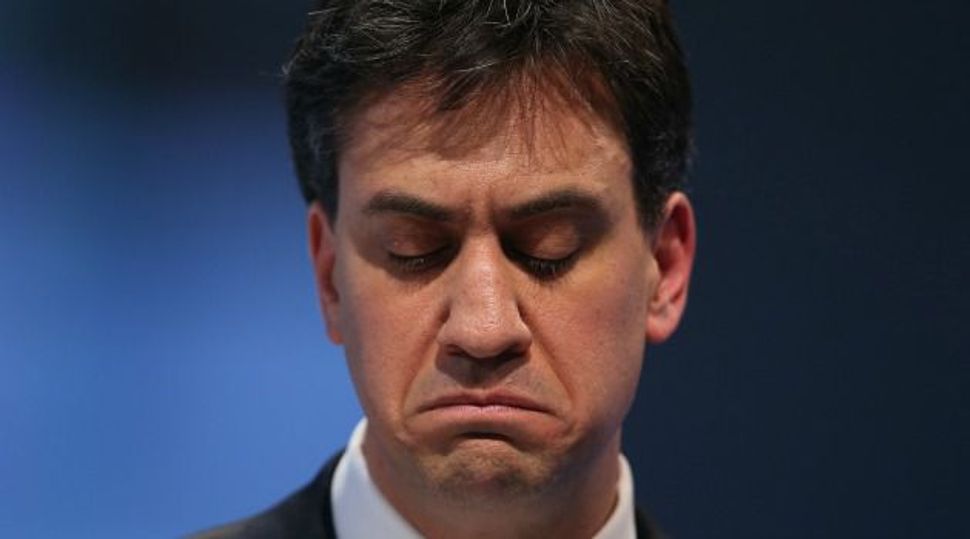 With Britain’s general election just one month away, a new poll of Jewish voters makes brutal reading for the Labour Party and their leader, Ed Miliband.

The poll, published by the Jewish Chronicle, shows that if British Jews were to vote tomorrow (and if we remove undecided voters from the equation), 69% would vote for the Conservative Party, while only 22% would go with Labour. The support in the community for both UKIP and the Liberal Democrats is negligible, each polling around 2%.

To give you some idea of how lopsided this is compared with the rest of the country, the last polling average calculated by the BBC on April 4 had the Conservatives in the lead with 34%, Labour just a point behind with 33%, UKIP with 13%, and the Liberal Democrats trailing on 8%.

Evidently, Labour isn’t the only party failing to capture the imagination of British Jewry. But given Miliband currently has as good a chance of becoming the country’s first Jewish prime minister as not, the overwhelming Jewish support for his rival David Cameron is staggering.

On the one hand, Labour can’t do much to counter demographic change. The British Jewish community is a middle class community and the Conservatives are the traditional home of the middle class. The number of Jews living in working class neighborhoods of London like Redbridge and Brent is in terminal decline, and the main bloc of poorer Jews in Britain today — the ultra-Orthodox — votes en masse for the Conservatives.

But Labour can’t just use socio-economics as an excuse for having lost the Jewish community. What this poll shows is that Jewish voters fundamentally distrust Miliband on two key issues. Asked which party leader they thought “would have the best attitude to the Jewish community,” 65% said Cameron while 13% said Miliband. This makes sense, given we are living in a time of heightened anxiety over Jewish security and no party in Britain takes the issues of anti-Semitism and religious freedom (on matters like kosher slaughtering) as seriously as the Conservatives.

Worse still, asked which party leader they thought would have the best approach to Israel and the Middle East, only 10% said Miliband versus 65% for Cameron. Having spent almost four years courting Jewish communal institutions, going so far as to declare in Jerusalem last April that “Israel is the homeland for the Jewish people,” Miliband destroyed his standing on Israel during last summer’s war with Hamas when he came out in strong opposition to Operation Protective Edge.

The nadir of Miliband’s relationship with the Jewish community then came in October when Labour backed recognition of Palestinian statehood during a symbolic vote in Parliament. Miliband thought it good politics, but the fact that attitudes toward Israel influence the vote of 73% of British Jews apparently wasn’t taken into account. Of course, given there are 280,000 Jews in a country of 63 million people, you might say the votes of British Jews don’t matter an awful lot. Yet, such is the concentration of the Jewish population in certain neighborhoods that Jewish voters have the power to swing the result one way or the other in key constituencies.

When it comes to swing seats, attention should focus on Hendon — the outer reaches of Jewish north London — where 17% of voters are Jewish. In 2010, the Conservatives took the seat from Labour by 106 votes. If Labour want to form a government after May 7, winning in places like Hendon will be essential. The same goes for Hampstead and Kilburn, where Labour currently has a majority of 42 votes. Jewish voters make up 6.5% of voters in this more diverse constituency.

In the north of England, Jewish voters will matter most for Labour in Bury South, currently a marginal Labour seat held by Ivan Lewis (who himself is Jewish). Bury South — which encompasses Sedgley Park, a neighborhood where over a third of the population is Jewish — has the highest proportion of Jewish voters of any seat outside of London and the southeast: 10%. It is here, as well as in Hendon, that Labour and Miliband’s failures on Israel and Jewish issues will be greatest felt.