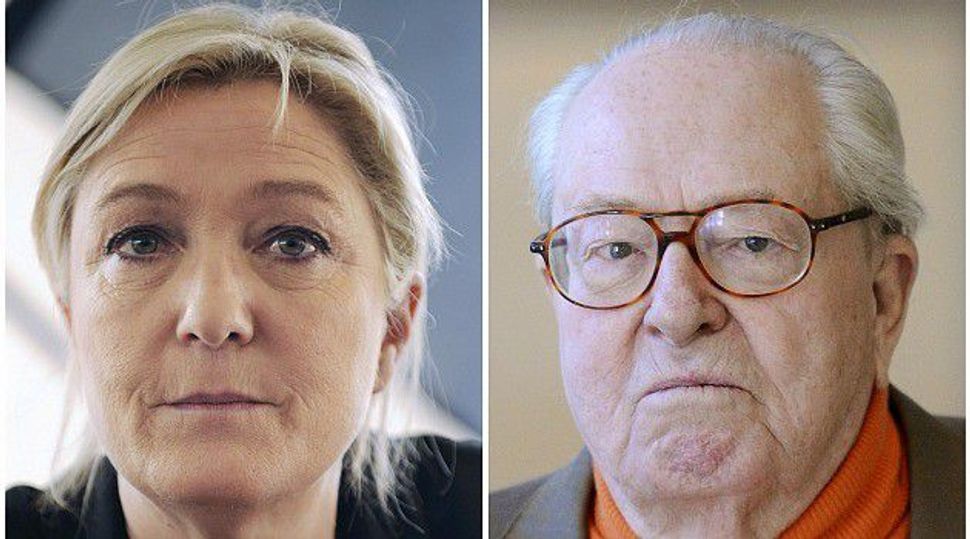 When I arrived in Paris last week for a research trip, little had changed from my many previous trips. Though spring, the weather was drizzly and cold; despite the economic crisis, charming stores displayed tempting breads and books; and notwithstanding the “défense de fumer” signs, café terraces were dense with cigarette smoke.

And while Marine Le Pen talked the talk of a kinder and gentler Front National, her father, the FN’s founder Jean-Marie Le Pen, walked the walk of the party’s original anti-Semitic and racist values.

We will always have Paris, but will we always have a Front National committed Jean-Marie Le Pen’s family values?

Much depends on the answer to this question. When Marine Le Pen took over the family enterprise in 2011, she undertook its “dédiabolisation” or “de-demonization.” Thick with defenders of French Algeria, Vichy France and the pre-Vatican II Church, the Front National under Jean-Marie Le Pen became a permanent feature of the French political landscape.

Rather like the septic tank hidden behind an azalea bush, though, the FN long remained a marginal feature in French elections. Yet its fortunes, yoked to the rhythm of unemployment and immigration figures, began to rise in the late 1990s. They climaxed in the presidential elections of 2002, when Le Pen knocked out the Socialist candidate Lionel Jospin in the first round. Come the second round, he in turn was thrashed by the vast “republican front” that rallied to the conservative Jacques Chirac.

The Republic was saved, but Le Pen was not doomed, if only because he never expected to win. The prospect of political power, which entails compromises and concessions, always meant less to him than the power and freedom of public performance. As Annette Lévy-Willard, the veteran journalist at Libération told me, “Le Pen never cared or never believed he could be part of the political establishment. He ran for the pleasure of running, not with the goal of winning.”

What especially pleased Le Pen were his notorious “dérapages” or “verbal skids.” Seemingly spontaneous, these slips were in fact as deliberate and violent as, say, bursting into a kosher supermarket and gunning down its shoppers. From dismissing the gas chambers at Auschwitz as “a detail of history” to joking that “Monsieur Ebola” will solve the question of immigration in France, Le Pen’s slips kept him, if not in political office, in the media limelight (and the courts).

Yet it isn’t just a role: Le Pen believes in his anti-Semitic and anti-republican script. No doubt he believed his daughter was also a true believer. But this particular belief quickly evaporated. Marine promoted her father into the powerless office of lifetime honorary president, purged the skinheads and anti-Semites, and privileged a new generation of leaders like her vice-president Florian Philippot, a graduate of the elite Ecole Normale Superieure who also happens to be gay. She also declared the Shoah as the “summum of barbarism” and sought to mend ties with the French Jewish community. (Her success has been mixed: when Roger Cukierman, a French Jewish leader, described Le Pen as “personally irreproachable,” he sparked a firestorm of criticism among French Jews and had to “clarify” his remark.)

Thierry Pech, the director of the progressive think tank Terra Nova, listed for me the ingredients of the FN’s new “political cocktail.” Along with a dash of “solicitude and compassion” for marginalized blue-collar workers, there is also a heaping of laïcité, or secularism, to comfort those worried about the growing presence of Islam. The recipe has proved wildly popular. In last month’s departmental elections, the FN, won more than a quarter of the vote, confirming a dramatic shift in modern French politics: France had morphed from a two to a three party system.

This has been a source of panic for the Socialists, who have become distant also-rans to the FN and conservative UMP. Yet the FN’s success has also been the cause for its current internal crisis. In a long interview published in Rivarol, a virulently anti-Semitic newspaper that, in an earlier incarnation published under the Nazi occupation, Le Pen reaffirmed his most vile convictions. As the NYT reported, he insisted the Holocaust was a detail, described Philippe Pétain, Vichy’s collaborationist leader as a patriot, and dismissed Prime Minister Manuel Valls, a naturalized citizen, as less than fully French.

(What the Times story omitted, however, was Le Pen’s declaration that “it is normal to combat democracy”—thus recalling the FN’s violent origins—and call for an alliance of “Northern peoples” between Europe and Russia. This racialist concept, the historian Nicolas Lebourg noted, is a throwback to the grim worldview of GRECE, the 1970s think tank devoted to maintaining the purity of the European race.)

There is, obviously, a Shakespearian dimension to this drama, one that casts Le Pen as Lear and his daughter as Goneril. We must recall, however, that Le Pen was less Lear than his Fool; he was happier in scandalizing his country than ruling it. But not only is he a fool with deeply held convictions, Le Pen is also not so foolish to fail to grasp the significance of his daughter’s ambitions. The “demons” the daughter is exorcising—and these include anti-Semitism and Pétainism—are the political values that have structured the father’s entire life, as well as part of the party’s base.

It is already clear that Marine Le Pen has transformed a potential political meltdown into a goldmine. On Thursday she announced on prime time television that the FN had begun disciplinary procedures against her father. She also insisted that while she felt great sadness as Le Pen’s daughter, the disappointment of her compatriots was even greater. Tellingly, the party’s leadership, including the old guard, has hailed her leadership in this crisis.

This particular Goneril is revealing a Gaullist side. With her father finally sidelined, Marine Le Pen can lay the foundations for a conservative party with authoritarian tendencies not terribly different from Gaullism. (She has already hinted at ditching the party’s name.) The consequences are momentous. The flailing Socialist Party, whose political platform has been reduced to warning against the fascist peril represented by the FN, will thus lose even that advantage.

If the PS fails to reinvent itself as dramatically as the FN, France’s unprecedented three party system might soon again become two—though now the division will not be between Left and Right, but instead between Right and Authoritarian Right. The Left will be reduced to a historical museum piece—and therein will lay the real tragedy.