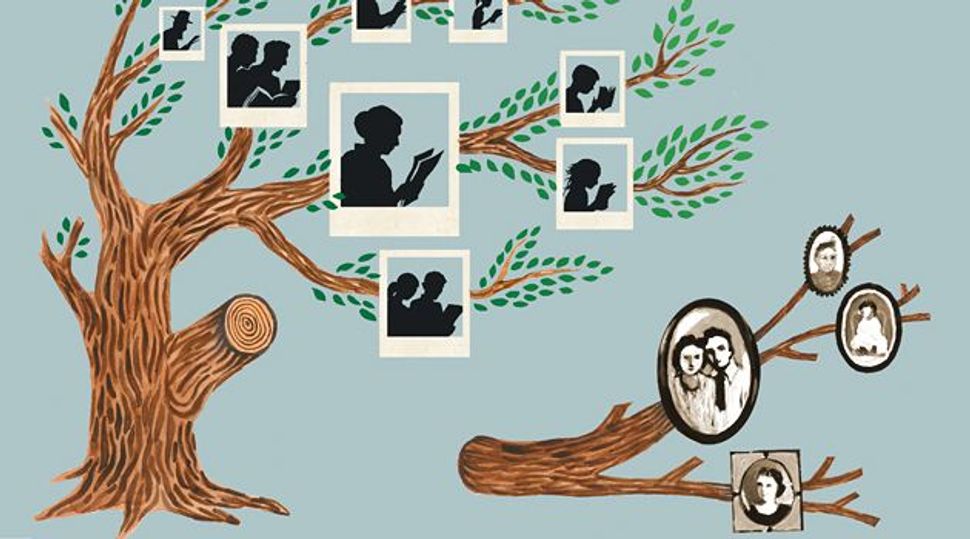 On Holocaust Remembrance Day in 2015, Abigail Pogrebin explained how to make the holiday meaningful year after year. Her message resonates just as strongly today.

Tonight I will be reading aloud the names of strangers.

The annual “Reading and Hearing of the Names” is coordinated by the JCC in Manhattan in honor of Yom HaShoah — Day of the Shoah, the holiday created in 1953 to commemorate the cataclysm.

“Shoah” literally means “catastrophe” and “whirlwind.” There is no way to do justice to it. But I want to mark it ritually somehow, so I will show up at Congregation B’nai Jeshurun, where the names will be recited all night long.

When I started researching Yom HaShoah, I assumed that, despite our people’s penchant for dispute, its origin would have been uncontroversial. Who could argue that the 6 million do not deserve a separate day of remembrance?

But argue they did. When Israel decided in 1948 to pick a date for memorial, those Zionists who had been part of the underground Nazi resistance wanted the new holiday to fall on the anniversary of the Warsaw ghetto uprising — April 19 — so that it would honor Jews’ strength, not just their slaughter.

Orthodox Israelis said it was wrong to create a day of mourning so close to Passover, a time that is supposed to be joyful. Some said Yom HaShoah should be folded into the existing solemn day of remembrance, Tisha B’Av, which falls in the summer and marks the Temple’s destruction and all our persecutions. Today, many ultra-Orthodox Jews still hold that view.

In 1953, after two years of argument in the Knesset, President David Ben-Gurion found a middle ground: Yom HaShoah would fall on the 27th of Nissan — not too close to Passover, but not on Tisha B’Av either.

In Israel, at 10 a.m. tomorrow, the air raid sirens wail and everything stops — traffic, commerce, conversations. It’s an arresting portrait which I’ve only witnessed on YouTube: The world halts for two minutes of frozen memorial.

In New York City, the “Reading and Hearing of the Names” was conceived by B’nai Jeshurun in 1995 and then BJ Rabbi Rolando Matalon, invited the Manhattan JCC to expand it in 1998. The JCC now coordinates every synagogue on the Upper West Side, across denominations, to read names of Holocaust victims from 10:00 in the evening to 7:00 the next morning. It continues the next day at the JCC building itself, from 9am-7pm.

“What’s stunning,” says Rabbi Joy Levitt, the JCC’s executive director, “is that I’ve been doing this for 17 years, and we’re not even a fraction of the way through the names we gathered from Yad Vashem [the official Holocaust memorial in Jerusalem], which obviously don’t include all 6 million.”

The names are organized by country. “I remember that it took us four years just to read through the Jews of Belgium,” she notes.

I struggle, as I’m sure every person has, to confront the truth without becoming unhinged by it, to make myself a student of this horror because it seems my minimal obligation.

But mostly I end up feeling the predictable weight of inadequacy: What do my learning and lamentation really accomplish? Is it not somewhat self-serving to show up, hear names, and go home to bed, just to ease my impotence?

I answer myself: You don’t matter; they do. Your task is to help remind the world that they were here.

I ask Levitt, who has been a reader of names every year for almost two decades, what the experience is like. “Two things have struck me especially,” she answers. “I’m sometimes suddenly aware that what I’m reading are the names of one entire family. You can’t be 100% sure, but you have the feeling, partly because we see the ages of the people who’ve died. That’s overwhelming.”

She says there is always a JCC staff member in the room, even when there are only two or three others present, even in the earliest hours of the morning. It reminds me of shemira — the Jewish ritual of watching over the body of the deceased from the time of death until burial — and I’m moved by that idea, that we stand sentinel for each other.

“The second thing that produces a lot of anxiety for me,” Levitt continues, “is that the names are really hard to pronounce. You’re talking about Russian names, Hungarian, Polish — languages that we are not that familiar with and where the spellings aren’t Americanized. When I was a congregational rabbi, one of the things that mattered most to me when I would do a funeral is to make sure I got the name right. I would go over and over it before the eulogy. It felt to me so critical to pronounce someone’s name accurately. And in the room, if you get it wrong, it feels so… disrespectful in a very profound way. But it’s really hard to get these names right. And I ask myself, is it better to try and do the best you can? Or have we just botched it? I’ve decided that it’s better to try. And that the intention of getting it right has to get me through it.”

I ask her to respond to those who might say that reading name after name for hours and hours is a morbid exercise that can lose meaning rather than heighten it. “It doesn’t feel morbid, actually,” Levitt counters. “It feels deeply respectful. And it connects us. It is a way of saying, ‘This is our family, too.’”

Because Yom HaShoah has no liturgy, blessings or agreed-upon ceremony, many have said it has yet to take root and therefore remains precarious.

“Nothing in Jewish history is remembered without ritual,” Rabbi Avi Weiss wrote in The Huffington Post last year. (Weiss is considered a founding father of “Open Orthodoxy” — an egalitarian approach to Orthodox Judaism.) “If Shoah memory is not ritualized, the Shoah will be relegated to a footnote in Jewish history.”

In 2012 he created a Yom HaShoah Haggadah called “The Third Seder,” in which the Holocaust is re-enacted. Weiss writes, “It’s based on the Haggadah’s dictum: bechol dor va’dor chayav adam lirot et atzmo…. ‘In every generation we must tell the story as if it happened to us.’”

He explains what takes place during this Seder: “We re-enact the Shoah,” he says. “Numbers are stamped on our arms, symbolizing physical destruction; the Hebrew alphabet, aleph bet, is burned, symbolizing spiritual devastation; children separate from their parents and walk to a roped-off area, symbolizing the million and a half children murdered during the Shoah.”

To those who would say that it’s trivializing to step into the shoes of survivors, Weiss counters that it keeps their stories vivid and urgent. “Unless all of us recite and re-enact the narrative as if we were there, the Shoah will be forgotten,” he said.

Another proponent of finding ways to make every Jew own Yom HaShoah more actively is Rabbi Yehuda Kurtzer, president of the Shalom Hartman Institute of North America, which offers deep learning opportunities to clergy, Jewish professionals, and interested laity.

In our telephone interview, Kurtzer ventures into what he knows is delicate territory. “I’ve been trying to push for ways to make Yom HaShoah look a little more like Pesach,” he says, “where we are a little less concerned about the actual details of the perpetration of the Holocaust and much more interested in becoming narrators and participants in this drama, where we can see ourselves as having come out of Auschwitz.”

“It’s a very hard thing to talk about publicly, because the generation of survivors is still around and it’s great chutzpah to say to people, ‘I’m going to now re-enact your story while you’re still alive.’ So I’m cautious about it. I think it may only make sense in 20 to 30 years, when you no longer have a generation of survivors around. But at a certain point, we are going to have to make a switch as a people, from thinking about this as a historical day to thinking about it as a Jewish day. I don’t think we’ve really done it.”

Though some may bristle at the idea of seeing ourselves “as coming out of Auschwitz,” I grasp his point: If we depend on survivors to tell the story, the story won’t outlast the survivors. And it may just be the case that only when the survivors are all gone — sadly, in the not-to-distant future — will every Jew begin to really own this history and this holiday.

“At the risk of a very dangerous analogy,” Kurtzer says, “the Israelites don’t retell the Exodus from Egypt until they go into the Promised Land, when the whole generation of those who came out of Egypt aren’t there anymore. I think something like that needs to happen with the Shoah, where we start telling the story as if it’s our story.”

But it seems to me sacrilege for us non-survivors to become the tellers ourselves. We can, and should, relate the grim events, but who are we to relive them?

“It may be too soon,” Kurtzer concedes, “and it may feel a little bit too raw to do that, but I think we’re sitting right now on the cusp of a generation that’s going to have to decide to commit to that story.”

Whether or not I’ll be committed to observing this holiday, I know I am committed to being a protector of this story. Many have told me that the Holocaust can’t be the organizing principle of our Judaism and it isn’t mine by itself. But it is, to me, just as foundational a narrative for our people as the Exodus.

So I will be at B’nai Jeshurun tonight to join a symbolic minyan of mourners from every prayer group in the neighborhood.

Rabbi Levitt notes, “There is a lot that divides our various Jewish religious communities – Reform, Conservative, Orthodox, Reconstructionist, Renewal. We don’t agree on a lot. It’s hard to find consensus. We don’t pray the same way, we don’t necessarily vote the same way, we don’t celebrate the same way. But in this moment, the entire clergy on the West Side stands together and there’s no debate, no difference; nobody’s concerned about somebody else’s religious toes being stepped on. There is something profoundly spiritual about sitting in a darkened synagogue, just reading names.”