Divergent Views of the Holocaust Form Root of Tension With Israel 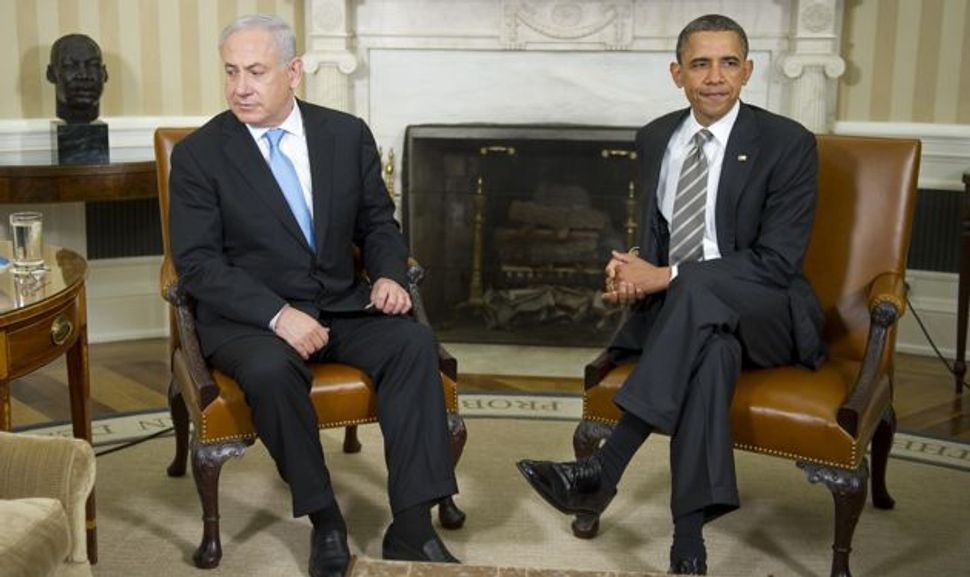 Once upon a time, decades before the embittered encounters of Barack Obama and Benjamin Netanyahu, an Israeli prime minister decided to publicly humiliate an American president whom he deemed disloyal. The men in question were Menachem Begin and Ronald Reagan, and the immediate cause of their confrontation in 1981 was Israel’s annexation of the Golan Heights.

“What kind of talk is this, ‘punishing Israel’?” Begin declared in a statement delivered to the American ambassador, Samuel Lewis. “Are we a vassal state of yours? Are we a banana republic? Are we 14-year-olds who, if we misbehave, we get our wrists slapped? Let me tell you whom this Cabinet comprises. It is composed of people whose lives are marked by resistance, fighting and suffering.”

Indeed, regardless of the personal enmity between Obama and Netanyahu, stinging words have often been exchanged by their two countries. Dwight Eisenhower threatened economic sanctions against Israel for its Suez invasion of 1956. James Baker, then secretary of state, told Congress in 1990 that Israel should “call us when you are serious about peace.”

During the suicide bombings of the second intifada, in 2001, Prime Minister Ariel Sharon accused President George W. Bush of sacrificing Israel the way Neville Chamberlain did much of Europe to Hitler. The term that Netanyahu has periodically tossed around to oppose territorial compromise — “Auschwitz borders” — was first coined by none other than that quintessential Anglophone Ashkenazi liberal, Abba Eban.

There is something especially revealing in the way that Eban, Begin, Sharon and Netanyahu all reached for rhetoric that evoked the Holocaust in chastising the United States. Beneath whatever temporal causes and individual animosities have troubled the diplomatic waters between Israel and America, there lies a profound disagreement about the Holocaust.

This argument is not the awful, familiar one mounted by Holocaust deniers. Rather, it is about whether, in the face of the Nazi mass murder — and, by extension, any postwar threat to Israel — America acted as the rescuer or the abandoner. No wonder, from an Israeli perspective, Obama’s promise that he will “have Israel’s back” rings so hollow. No wonder, from an American perspective, those election-season warnings that Obama will “throw Israel under the bus” have failed to sway many voters.

Yes, recent opinion polls show that Obama’s approval rating among American Jews has fallen sharply in the past two months. Even at its low ebb of 54%, however, it contrasts starkly with the 59% disapproval rating for the president among Israeli Jews. And the nationwide support in America for a nuclear deal with Iran (59% in an ABC/Washington Post survey) compares with the 72% of Israelis (in a Times of Israel poll) who said they do not trust Obama on the Iran issue.

That kind of discordance makes sad sense when one considers each nation’s Holocaust narrative and what those narratives imply about American intention. In this country, the entire World War II effort fits into the self-congratulatory trope of “The Greatest Generation,” as Tom Brokaw titled the book that has exerted such pop-culture influence.

For American Jewish soldiers, in particular, the experience was of liberating concentration and death camps — sharing C rations with starving inmates, being spontaneously embraced, hearing even a Catholic chaplain say the Kaddish in Hebrew. The concept of “Judeo-Christian tradition,” which was actually created for wartime morale and unity, was consecrated at Dachau and Ohrdruf and Mauthausen.

“Neither rank nor religion mattered in the face of Nazi atrocities,” Deborah Dash Moore writes of a combat radioman named David Cohen in her authoritative history, “GI Jews: How World War II Changed a Generation.” “Their stunned responses erased the differences between Christians and Jews… Cohen was not alone among his comrades. At this moment, he knew they were [emphasis in original] his comrades.”

The emphasis on Americans as rescuers deeply informs the United States Holocaust Memorial Museum, the institution sanctioned by the federal government itself. “Several times throughout the permanent exhibition… visitors view images of concentration camps quite literally through the eyes of American GIs,” Jennifer Hansen-Glucklich writes in “Holocaust Memory Reframed: Museums and the Challenge of Representation.” “This technique in particular helps the visitor to identify with the American troops as one of the two categories of protagonists portrayed in the museum — liberators and victims.”

But while the United States emerged from World War II with 16 million veterans and only about 140,000 Holocaust survivors, the nascent nation of Israel swelled with what Tom Segev dubbed “the seventh million.” And the prevailing Holocaust narrative in Israel focused on the helplessness and abandonment of European Jewry — those who, as Abba Kovner quoted from Isaiah, “went like lambs to slaughter.”

Yad Vashem, Israel’s museum of the Shoah, venerates the partisans and resisters — Kovner, Hannah Senesh, the Warsaw Ghetto fighters. Israel itself is portrayed as the sole guarantor of Jewish safety in all the years since the war. Not only does Israel commemorate the Holocaust on a different day than does the United States, but Yom HaShoah there has a very revealing full name: Holocaust, Rebellion, and Heroism Memorial Day.

Instead of American Jewish valor in World War II, at least a certain sector of Israeli society sees American Jewish gutlessness, especially among the wartime communal and rabbinical leadership. Benzion Netanyahu, father of the current prime minister, distilled that view in comments he made in a 2009 interview: “Part of the problem was how they saw themselves. In their contacts with President Franklin Roosevelt, Jewish leaders thought of themselves as weak or helpless.”

From that assertion, it is just a short leap of interpretation to posit that FDR could have stopped or at least impeded the extermination by bombing the railroad tracks to the death camps, and that American Jewish cowards were the enablers of that failure. And from that piece of historical analysis, it is yet another short leap to the fear, indeed the expectation that, when it comes to Iran, Barack Obama is going to abandon Israel to its own fate.

At least as far back as 2006, Netanyahu was saying, “It’s 1938 and Iran is Germany.” Even if the prime minister, Senator Tom Cotton or Ayatollah Khamenei manages to derail the prospective nuclear agreement, that kind of rhetoric is certain to be heard again during some future dispute between the United States and Israel. History has taught our countries irreconcilable lessons about the Shoah.

Samuel G. Freedman is a professor of journalism at Columbia University and the author of seven books, including “Jew vs. Jew: The Struggle for the Soul of American Jewry” (Simon & Schuster, 2000).

Divergent Views of the Holocaust Form Root of Tension With Israel