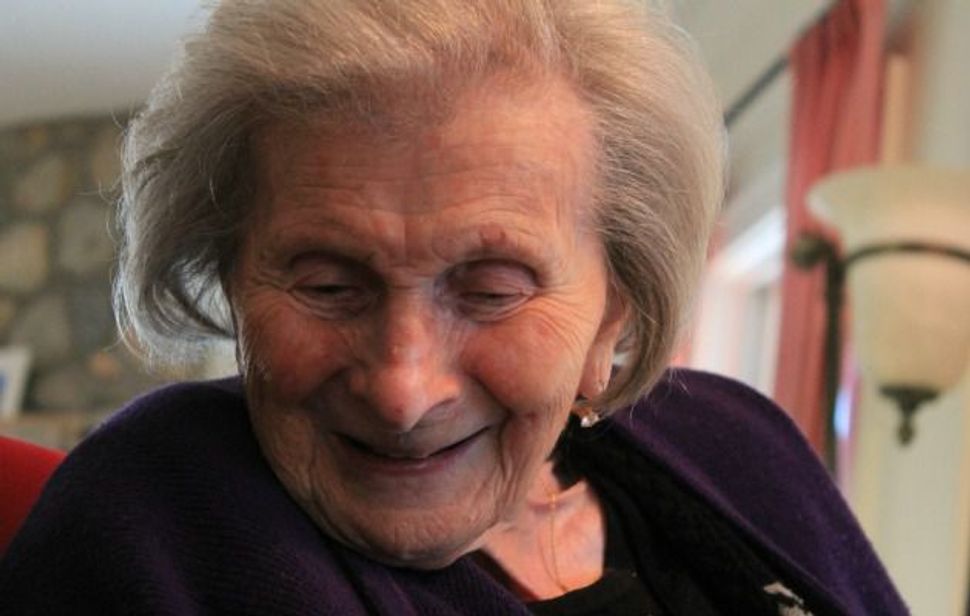 One day in 2002, my mother sat down in the living room of her Upper West Side, Manhattan apartment and told her life story to a stranger. The stranger was a volunteer, part of Steven Spielberg’s epic campaign to preserve the life stories of Holocaust survivors. For over three hours the stranger asked questions and my mother answered, a videographer recording it all.

I would have loved to watch it. I had always wanted to know more about my mother and she was so restrained, even stingy with the information. When I was in my teens we took long Shabbos afternoon walks together and I quizzed her incessantly, probably annoyingly, about her past. I’d squeezed out the basics — how she’d been deported from her hometown of Satmar, Rumania, first to an incineration lager (hence her untattooed arm) and later to a munitions factory where she manufactured bombs as a slave laborer. I knew about her liberation by a Jewish Red Army general who bravely kept his soldiers from entering the camp and raping the women. But there seemed so much more to know. Yet when my mother told me about the Spielberg interview, she added a caveat. “I don’t want anyone to see it until after I’ve died.”

I was puzzled but she offered no explanation. “That’s how I want it to be,” she said firmly. My mother was a formidable personality; there was nothing I could do to dissuade her.

It seemed that she saw the video as a radioactive isotope, dangerous and deadly. But why? Did she have something to hide, something too awful for her to reveal in her lifetime? Had she been a collaborator, a kapo perhaps? Or was the secret sexual — was my mother raped, molested, imprisoned in a Nazi brothel? In 1944 she was a beautiful eighteen-year-old, an Ingrid Bergman lookalike. It seemed entirely plausible that Nazis would use her for illicit purposes.

Maybe I was better off not seeing it at all. Maybe seeing it would make me crazy.

Then my mother became ill. At first, she just seemed wobbly and out of sorts, but a doctor diagnosed Parkinson’s disease. Over the next eight years, my mother’s muscles revolted against her brain. She went from forgetfulness to confusion to full-blown dementia. Today, she sits in a wheelchair babbling nonsense in the seven languages she once spoke fluently.

Once my mother had lost her mind, I guessed that the video was lost. She’d never told me where she put it. Her apartment was crammed with decades of clutter. How would I ever find it? So I gave up.

Then last winter I started a workshop in memoir writing. One day during class, I shared the story of the video. “Don’t you know,” said one of my students, “that you can find all the Spielberg testimony at Yad Vashem?” My mother’s video was located a half-hour away from my home and I could watch it there for free.

The question opened up again. Could I see it? Should I see it? I was still afraid. When my sister-in-law visited Jerusalem, I tried to get her to see it first. She could be the canary in the mine, the one to whistle if there was something toxic, but she demurred, citing my mother’s wishes.

Now what was I to do? Was it right to go? During one of our phone chats, I requested my mother’s permission. In a rare lucid moment she agreed. The ban was off.

For the next few months, I thought about seeing it but made no concrete plans. Then one sunny April morning, my father’s yahrzeit and the eve of Yom HaShoah (Holocaust remembrance day), I suddenly felt emboldened. I grabbed two of my young adult sons and journeyed to Yad Vashem’s viewing center. A volunteer handed us headphones and assigned us to a computer carrel with room for three. I typed in my mother’s name. Within seconds she was on the screen.

I’d forgotten how she’d been before she got sick, strong and intelligent and beautiful, wearing a stunning magenta dress, her hair freshly teased, a diamond pendant at her neck.

Speaking in perfect albeit accented English, she told her story from beginning to end. The interview was long — six 30-minute segments, three hours in all, crafted from scripted questions — but I was mesmerized.

Some of the questions were dull; the interviewer quizzing her about her prewar life, where she’d lived, what sort of kitchen, what sort of plumbing her home had had, what she did after school. My sons dozed, but I was glued to the screen, unwilling to miss even a second. At any moment, I was sure, she’d drop the bomb, reveal her secret, the consummate horror that had caused her to hide this video from us. I waited and listened but the moment never came.

The story my mother told was ordinary — if a Holocaust tale could ever be described as ordinary. There were no surprises; I’d heard most of it before. The most lurid thing about it was the very fact of the camps themselves.

Why then did she want to hide the video? I don’t know, but I have some theories. My mother was always shy, uncomfortable with compliments and attention. She didn’t like her name to be known. Even her charitable donations were anonymous. I suspect that her reluctance grew out of this same feeling. She didn’t want to be glorified, seen as a hero. But in her own quiet way, she was a hero.

Her heroism was expressed in perseverance. The everyday acts of getting up every morning, of keeping herself clean by washing in icy water, of forcing herself to swallow inedible food — these were heroic.

And she was blessed. It wasn’t my mother’s style to speak of miracles, yet the story is laced with them, beginning with her seemingly random decision to ride the third transport to Auschwitz instead of the doomed fifth one, and ending with her liberation by the kind Jewish Red Army General. Even she seemed conscious of a supernatural dynamic. When the interviewer asked her why she thought she’d survived, she had a one-word answer: “beshert,” pre-ordained, the result of a higher will.

It would have been nice to have seen the video earlier, to watch it with my mother at my side. It might have brought us closer, increased my love for her, yet that wasn’t to be.

Still, I was glad to meet my mother again at Yad Vashem. Talking to me from the screen, she offered lessons for life and a legacy that makes me proud.