‘We Did More Than Just Survive’ 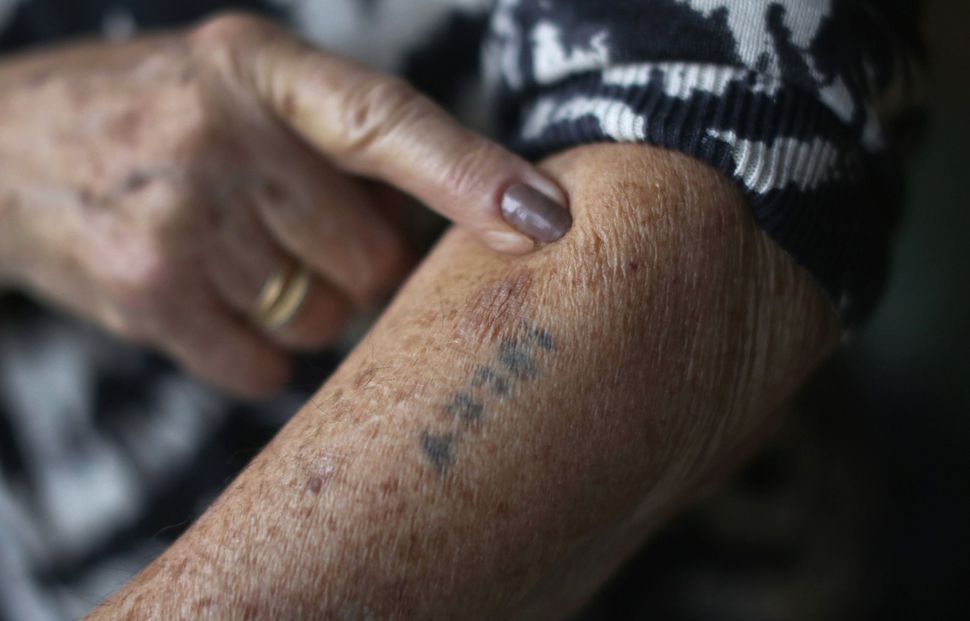 When it was my turn to read the names of Holocaust victims, I couldn’t see them.

The print was too small, and my reading glasses were too weak.

I was at Congregation B’nai Jeshurun in Manhattan at 10 P.M. last Wednesday night for the annual “Reading and Hearing of the Names” to mark Yom HaShoah — Holocaust Remembrance Day.

This tradition was conceived 20 years ago by BJ member Myriam Abramowicz, a filmmaker and daughter of survivors. Three years after its inception, BJ asked the Manhattan JCC to expand the rite to include all synagogues on the Upper West Side, whose volunteers come to BJ to read names all night long and into the next morning.

I watched Miryam in the darkened sanctuary, unobtrusively guiding the line of volunteers waiting to read the names from Yad Vashem’s list. Every shul was given a half-hour slot to read names by the flickering light of six candles, one for each million Jewish lives lost.

It was my turn at the table with the large book in front of me, and Myriam pointed to the place to start, as she did with every volunteer, just as the rabbi or cantor points to the right place in the Torah scroll on Shabbat morning.

I felt the weight and sanctity of this task, but panicked when I saw the font size.

“I’m sorry. I can’t see it,” I said quietly, and walked back to the seats.

I wasn’t the only one who had trouble with the small print; the man before me had also demurred. But I felt like I’d failed at my slight contribution to memory.

Miryam saw that some of us were struggling, and brought over another book with larger lettering, but by that point, I was in my chair and felt it would be inappropriate to get back on the line. Everything felt intensely sensitive to me in that sanctuary — fragile, sorrowful. I did not want to misstep.

I couldn’t help but think about the last time I’d been in BJ’s sanctuary – it was the antithesis of this scene, the raucous celebration of Simchat Torah in October, when giddy hordes exuberantly danced with the Torah scrolls, music playing without pause, far into the night.

However obvious, it is still profound to me that our tradition holds the two extremes in every holiday cycle of the year: boundless joy and bottomless grief.

That was spoken by Betty, 5 years old when her French family threw their belongings into a truck to escape the Nazis. “We had to act like we were furniture in there,” she recalled. No movement. No sound. When she started audibly sucking her thumb, her family crossly silenced her.

I was listening to Betty’s story at a performance of Witness Theater at the JCC, where 10 students from two schools — Abraham Joshua Heschel and Trinity — partnered with seven survivors to dramatize their stories after months of interviews and collaboration.

The tableau at the start of the performance stirred me most: the students entered holding the hands of the survivors whose biographies they’d recount. It was an unspoken promise from the students to their elders: we will tell your story. We are holding on — not just to history, but to you.

Each of the seven narratives was introduced with a brief but shattering slideshow: families smiling on boat trips, benches, front stoops, dressed in soft overcoats, painted in lipstick, holding babies aloft — all blissfully ignorant of the fate that awaited them.

Betty’s parents had placed her in a convent to keep her safe.

Natalie said no one in her town survived except her family.

Leon saw his brother shot in front of him, solely because he reached for some ice on the ground to drink.

What boggled the mind, as it always does, was every survivor’s main message: do not define us by this chapter. It was awful, but it’s not all there is. We did more in our lives than not die.

The students put out handwritten signs to underscore this, each card displaying one word spoken by their older counterparts:

“We should look at the people they were when they went in,” Menachem Z. Rosensaft tells me on the phone. His parents survived Auschwitz and he teaches about the law of genocide and war crime trials at the law schools of Columbia and Cornell universities. “You focus on the fact that they did not allow themselves to be dehumanized, that poetry was still written, even in the camps. You look at the physical and the spiritual resistance. People rescuing others. Sharing rations with one another. Even in the worst period, even in the most dire moments.”

His mother, a dentist who lost both parents, her first husband, and their 5-year-old son, Benjamin, managed to keep 149 children alive during a typhoid epidemic and brutal winter.

Rosensaft’s father, who narrowly escaped death multiple times, emerged after liberation as the leader of the survivors of the Bergen Belsen concentration camp, representing them in a displaced persons camp.

“You have to look at what happened afterwards,” says Rosensaft. “History doesn’t end in 1945; it goes on.”

Rosensaft’s new book is called “God, Faith and Identity from the Ashes: Reflections of Children and Grandchildren of Holocaust Survivors.” He views these stories not just as paradigms of endurance, but of positivity: they lived more. And that, he said, can be a beacon for the victims of more recent horrors, from Bosnia to Boko Haram.

“Rather than turning away from humankind and giving up on life, if the survivors of the Holocaust, in the days, months and years after their liberation, decided to rebuild their lives, to build new families, learn new languages and start anew — whether it be in the United States, Israel or Canada — and if their children or grandchildren within their generations are at the top of their professions in their fields of endeavor, then that is an inspiration to victims of other genocides and atrocities.”

I ask Rosensaft whether he’s disquieted by the idea that Holocaust remembrance gets just one official day. “I view Yom HaShoah as an important reminder of what we have to do the rest of the year,” he replies. “It is introspective. We stand and think back and say a communal Kaddish. But afterwards, I would have to say, ‘what are we going to do with those thoughts we had? What are we going to do tomorrow?’”

‘We Did More Than Just Survive’