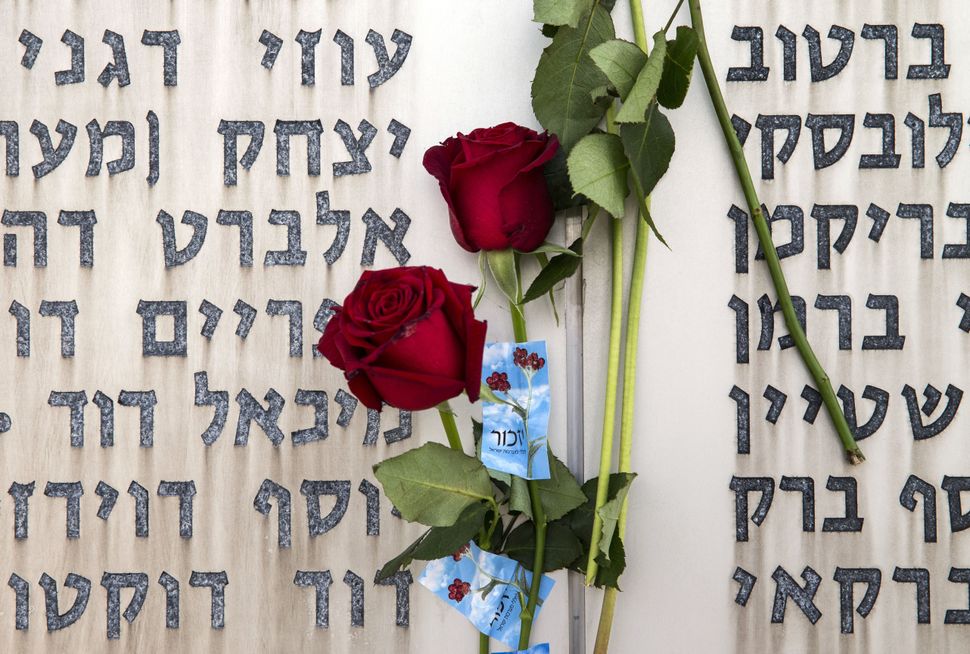 She was killed in 2002 at 24, in a terrorist bombing by Hamas at Hebrew University, where she was pursuing an advanced degree in Judaic Studies.

“The year that followed was one of mourning, of crying out in agony, of grasping for ghosts,” writes Michael Simon who was Bennett’s serious boyfriend when she died, “a year of searching for Marla, though she could not be found.”

I contact Simon, now Hillel Director at Northwestern University, to ask how he personalizes Yom HaZikaron – Israel’s Memorial Day for fallen soldiers and victims of terror –which falls on Wednesday, April 22nd this year.

“I think it was around the time of the bombing that Israel formally decided that Yom HaZikaron will also now remember victims of terror as an official part of the day,” Simon recounts. “On Har Herzl [Mount Herzl — also known as Har HaZikaron – Mount of Remembrance], there’s a wall with a couple thousand names. Marla’s name is up on that wall. And it sadly continues to add names.”

Though Bennett’s death devastated Simon, he thankfully managed to build a new life in its aftermath. He married Claire Sufrin, whom he met in Jerusalem four years later, and who now also works at Northwestern as a professor of Jewish Studies. They have two adorable young boys.

Just before Simon met Sufrin, he lost another person close to him — one of the students for whom he’d been a counselor in Israel. Yotam Gilboa was 21 when he was killed in Lebanon fighting in July 2006.

“So I feel very connected to Yom HaZikaron,” Simon says in our phone call. “Because of those experiences, you get a tiny taste of what it’s like…I’m not Israeli, but I think I’ve had a taste. People I loved were killed. This is the price that is unfortunately necessary to enable there to be a state.”

It’s a theme I keep hearing as I research this week’s back-to-back holidays – Israel’s Memorial Day followed by Independence Day. Mourning followed by celebration. An Israeli friend told me that in Israel, they cry at 10 A.M. and party at 3 P.M.

It reminds me of how often we lament and revel in close proximity – sometimes within 24 hours. We’re supposed to rejoice immediately after the purge of Yom Kippur, dance on Simchat Torah after the wistfulness of Shemini Atzeret, fast before the giddiness of Purim and the bounty of Passover.

“Israel cannot have one without the other – Yom Ha’atzmaut without Yom HaZikaron,” Simon says. “The State of Israel doesn’t exist in a vacuum; It’s not just celebration. It might be too much of a cliché now, but Ari Shavit captured it beautifully in the subtitle of his book, ‘My Promised Land: The Triumph and Tragedy of Israel.’”

The “tragedy,” of course, is the ever-deepening cleft between Israelis and Arabs, more gaping in the last year, thanks to the war in Gaza, anti-Semitism in Europe, and tensions on campuses like Simon’s.

“What’s been more personally intense right now,” says Simon, “more than my own story – is watching our students grappling with, ‘How do we properly embrace Israel without triumphalism, without exposing ourselves to being criticized for celebrating Israel without thoughtfulness about the challenges Israel faces or the things Israel does?’ When you pair Independence Day with Yom HaZikaron – Memorial Day, even the story itself isn’t just, ‘Yay, it’s a miracle, here we are,’ but, ‘Here’s the price that was paid not only to create the state, but that continues to be paid.”

In February, after impassioned debate and a very close vote, Northwestern’s student government passed a resolution asking the university to divest from six corporations which, according to the resolution’s sponsors, violate Palestinians’ human rights. The vote was largely symbolic, but it highlighted the fault lines between Jewish students, and among minorities whom Simon once considered partners.

“You had some of our Hillel students, saying, ‘Wait a minute, why did we lose our natural allies?: the African American students that we’ve done Black Freedom Seders with for the past ten years, the Latino group that we did a ‘bat mitzvahneria’ with the last two years – a combined bat mitzvah and quinceaneria program that brought the two groups together culturally.”

I can’t help but personalize his campus update, as my son is going off to Northwestern next fall. I don’t worry about Ben’s identity being shaken by eruptions of controversy, but I do worry that it’s become almost politically incorrect to celebrate Israel’s founding.

“I’m so glad our students are reflective about how to celebrate Yom Ha’atzmaut sensitively,” says Simon, “but on the other hand, the idea that before we do anything, we have to worry about how we’re perceived, that we’re unsure whether we can have an Israel celebration — I wouldn’t say it’s chilling, but I would say it’s concerning.”

Treading carefully, the Northwestern students decided this week’s events would include a program called “Sitting with Israel,” in which they’ve invited people to come and share 67 words – in honor of the nation’s 67th year – about their relationship with Israel, whatever that may be. “The hope is that there will be diverse voices and perspectives,” says Simon. Presumably that means Palestinian students, too. Perhaps enough events like this can, as Shavit puts it in his book, “unify a shredded society.”

Simon tells me he’ll also observe the holiday by participating in a public reading of Israel’s Declaration of Independence. I like the idea. Not only does the 1948 language remind me of the State’s ideals, but of our compass as a people.

“THE STATE OF ISRAEL….will be based on freedom, justice and peace as envisaged by the prophets of Israel; it will ensure complete equality of social and political rights to all its inhabitants irrespective of religion, race or sex; it will guarantee freedom of religion, conscience, language, education and culture…”

I plan to read and discuss this document with my teenage son and daughter when they get home from school Thursday, (even if it annoys them,) but I doubt I can convince them to accompany me to the concert, “Israel in Song,” at West End Synagogue. These modern holidays feel remote to them, and frankly, to me, too, as well as most American Jews. Yom HaZikaron and Ha’atzmaut have yet to be routinized or personalized.

“I think these holidays are both failures in American Jewish life,” says UCLA Hillel director, Rabbi Chaim Seidler-Feller. “They haven’t reached or achieved that sense of sanctification. And one of the reasons for that is that there’s no home ritual associated with either one of them. There’s no Jewish holiday that can survive without a table.”

Seidler-Feller, whose campus also landed in the headlines this year when UCLA sophomore Rachel Beyda applied for a seat on the Judicial Council and was questioned about her Jewish leanings, is pessimistic about these holidays ever resounding. “There is an experience – a lived experience – that makes those days more immediate for Israelis.…It’s a cycle from destruction to rebirth and it’s alive for Israelis in ways in which is a bit distant for younger American Jews.”

In her essay, published just before her murder by The Jewish Journal of San Diego, she described her new life in Jerusalem: “Just a month after I arrived, the current ‘intifada’ began. My time here has been dramatically affected by both the security situation and by the events happening around me. I am extremely cautious about where I go and when; I avoid crowded areas and alter my routine when I feel at all threatened. But I also feel energized by the opportunity to support Israel during a difficult period. This is undoubtedly an important historic moment for both Israel and for the Jewish people. I have the privilege of reporting to my friends and family in the United States about the realities of living in Israel at this time and I also have the honor of being an American choosing to remain in Israel…There is no other place in the world where I would rather be right now….Life here is magical.”