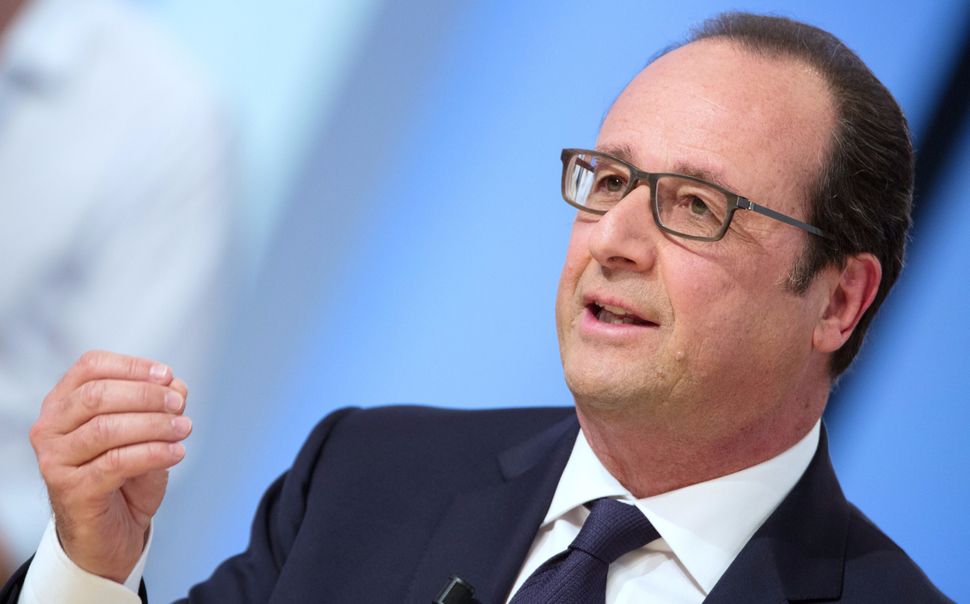 What started out as an unusual debate on primetime television between French president Francois Hollande and five teenagers about to vote for the first time, took an even stranger turn when they argued for several minutes whether or not it’s OK to laugh at the Holocaust.

The round-table discussion took place Sunday, during the and featured five high-schoolers from the Parisian suburb of Thiais facing off against the President of the Republic. Most of the talk revolved around the pressing question: What are the rules and the limits when it comes to speaking about the Jews?

When the show’s host brought up Dieudonné, the French comedian whose mockery of Jews and the Holocaust has earned him fines and cancellations, a boy named Yanis asked Hollande: “Does one have to hide laughing at Dieudonné? Should someone be embarrassed about liking his shows?”

“One has to consider,” Hollande replied, fumbling for words, “why are they laughing at that?”

“Because it’s funny,” said Yassine, a female student sitting next to Yanis.

Hollande: “And when he dresses up as a German, as a Nazi, and says we must kill the Jews—that’s funny?”

As the debate continued, Hollande mentioned that there have been other genocides and massacres, such as the Armenian genocide, at which point Yanis interrupted, “Yes, but people talk more about the Jews…”

Hollande: “We talk about them because there were six million” lives lost.

“But one death is still a death…” Yanis replied, apparently arguing that too much emphasis is placed on the Jewish tragedy.

“No, it’s not the same,” Hollande insisted. “What was the final solution? To kill all of them. To exterminate them. To make it so there’s none left, so no one can even find their bodies, not even a trace. To eliminate a part of humanity—that’s what it was about. That’s why, whether one is Jewish, Christian, nothing at all, or Muslim, one needs to have respect for what happened. And that’s why it’s so important that we be able to talk about it, to understand what happened, to understand how they could reach the point of exterminating a part of humanity.”

From there the discussion moved to how one talks about religion in the classroom.

Yassine, declaring herself a Muslim, said she enjoyed learning about other religions but complained about the way Judaism is taught. “In school we study Judaism by way of the conflict,” she said, rather than learning about the faith itself.

One takeaway from the bizarre television spectacle: the future of French Jewry could depend, in part, on how effectively the establishment can respond and communicate to thousands of adolescents like Yanis and Yassine. And almost certainly, it will take more than what Hollande was able to muster.