More Is Better When It Comes to Jewish Numbers 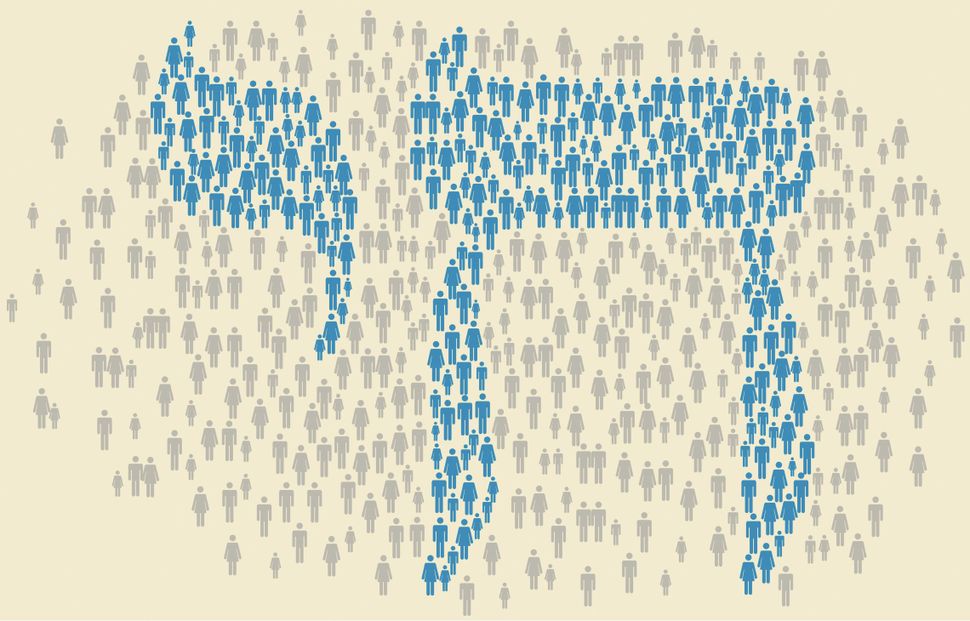 When it comes to the Jewish community, does size really matter? It’s not a flip question. Many observers greet the high rates of intermarriage, low birthrates and widespread alienation from Jewish engagement among the non-Orthodox with little more than a shrug.

These Jewish populations might be numerically challenged, the argument goes, but so what? Quantity is not quality, and demography is not destiny.

This argument is at the heart of Shaul Magid’s discussion of the Kotzker rebbe’s approach to Jewish continuity in a recent article: “Give me ten emesdike yiddin [true Jews], and I will change the world.” For the Kotzker, as for Magid, large Jewish numbers have no intrinsic value, aside from ensuring the “stability of the Jewish community.” For him, Jewish continuity is secured through a select few who bring about a “creative Jewish renaissance.”

Yehuda Kurtzer makes a similar point in his argument in these pages about the overemphasis on Jewish fertility rates. Recalling Abraham and Sarah and their only child (Isaac), he writes: “Given a choice between investing in the hard work of defining and sustaining our mission, or in promoting the production of more people, I hope we remember our legacy as the people of Abraham and Sarah.”

Many scholars and thinkers of Jewish demographics are similarly unperturbed by signs of demographic decline, and point instead to a healthy evolution of American Jewry. In their view, much of the putative hysteria over the findings derives from using antiquated measures of Jewish identity and ignoring emerging forms of Jewish engagement. Instead of the historic — and so far unrealized — vision of Jews as an “ever-dying people,” they point to the ever-evolving modes of Jewish engagement. Just as Hadassah and B’nai B’rith succeeded Settlement Houses, so, too, are today’s fading institutions being replaced by all those innovative groups cited by Slingshot.

But are they right? Can we easily dismiss what is so glaringly evident from study after study, namely that the active Jewish middle — lying between the Orthodox and the unengaged — is rapidly shrinking?

We would argue that numerical strength is inherently valuable and essential to the meaningful Jewish life of American Jewry.

As Magid hints in his article, one reason that we care is because quantity does affect quality. More engaged Jews mean stronger communities able to mobilize more people and more resources, critical to achieving political influence, social diversity, cultural creativity and religious vitality. Synagogues, day schools, Israel trips, camps and more all depend on Jewish numbers, and so do institutions devoted to bettering the world — such as American Jewish World Service, Repair the World and Mazon.

In addition, the number of active American Jews of all denominations affects Jews worldwide. As today’s strongest Diaspora Jewish community, American Jewry lends crucial support to Jewish communities across the world, particularly to the State of Israel. Those who believe in a healthy relationship between America and Israel, who see Israel as a haven for endangered Jews and who treasure its promise as a Jewish and democratic state must care about the number of American Jews who are willing to help shape Israel’s destiny through their political power.

Beyond these considerations, we stake out a more ambitious claim: Jewish tradition and values demand that we sustain, if not expand, the size of the active Jewish community, be it in America or elsewhere.

In Genesis we read that God creates human beings — male and female — and then shapes them b’tselem elokim, in the image of God. Each individual is unique, each is irreplaceable and each has infinite value. Applying this principle to Jewish demographics, we approach every single Jew as uniquely capable of contributing to Jewish life. This egalitarian principle rejects the notion of a “select few,” putative masters of Jewish cultural renaissance exclusively charged with Jewish continuity. When the Jewish community loses committed and engaged members, be they real or potential, Judaism becomes more impoverished, denied of these individuals’ infinite potentialities.

The Bible also teaches about the virtues of large numbers of people joining together in covenant. In Genesis, God commands humanity to “be fruitful and multiply.” Subsequently, God blesses our foreparents with great numbers, with descendants as many as the “stars in the sky” and the “dust in the earth”: A large multitude of people in one’s community is among the highest of blessings.

As social scientists, our abiding scholarly focus is driven by deep commitment to Jewish purpose and the Jewish future. So from our perspective, the shrinking numbers of active Jews matter. The low fertility rate — among non-Orthodox Jews of just 1.7 — matters. The high intermarriage rate — reaching 80% among Reform Jews — matters. The few grandchildren of intermarried couples raised in the Jewish religion — just 7% — matters. The numerous adults with Jewish parents who decline to see themselves as Jews — more than 2 million — matters.

These erstwhile Jews matter because they could be contributing to Jewish vitality; because their absence diminishes the diversity of Jewish life, and because every one of them has a unique chance to experience the gift of helping shape their — and our — Jewish legacy. Size here does matter. And it should matter to those who care for the quality of the Jewish past, present and future.

Mijal Bitton is a doctoral candidate at New York University, where she is focusing on the sociology of Sephardic Jews from Arab lands, and is a junior fellow at the Shalom Hartman Institute of North America.

Steven M. Cohen is a research professor of Jewish social policy at the Hebrew Union College-Jewish Institute of Religion and the director of the Berman Jewish Policy Archive.

More Is Better When It Comes to Jewish Numbers