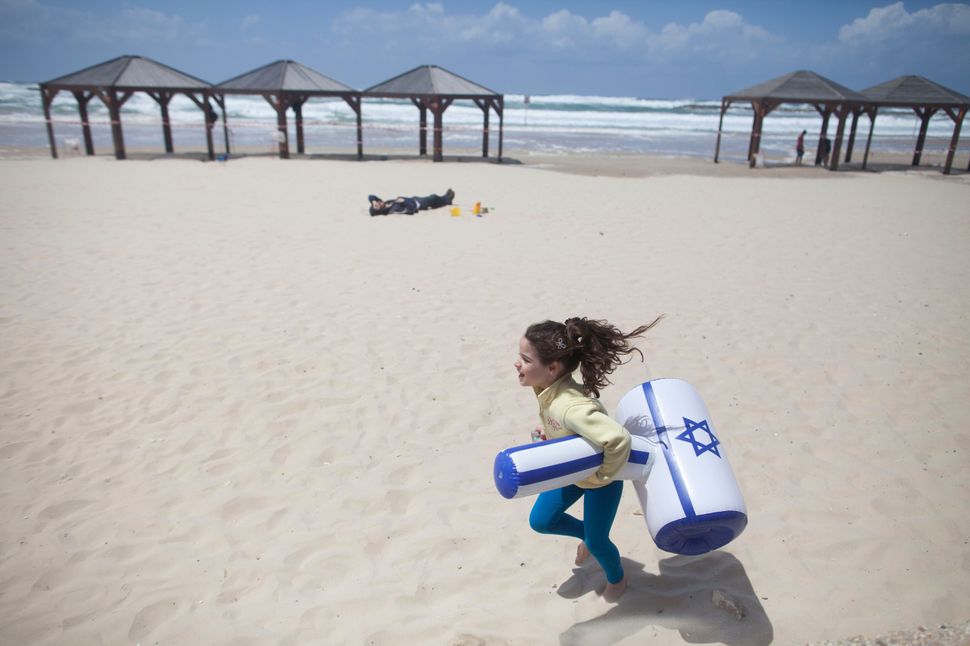 On the eve of Israel Independence Day last week, the blue and white balloons came cascading down from the balcony at Park Avenue Synagogue, New York City’s largest Conservative congregation.

For a holiday that has enjoyed little star-billing in the annual American cycle, this “Community Celebration” organized by the Jewish National Fund was clearly a concerted effort to make Yom Ha’atzmaut sing and make it stick.

Rabbis from almost every synagogue on Manhattan’s East Side gathered to read sections of Israel’s founding document, the Declaration of Independence. Cantors sang a medley of Israeli anthems, including “Jerusalem of Gold” and “Al Kol Eileh.”
Representatives from Jewish organizations read 67 words about Israel in honor of its 67th year.

“The week including Yom HaShoah, Yom HaZikaron and Yom Ha’atzmaut frames not just a week of the Jewish calendar but it frames contemporary Jewish identity,” he said, with some urgency.

But Jewish identity is noticeably unharmonious when it comes to the third holiday, celebrating Israel’s independence. Some feel it deserves un-shaded celebration. Some see it through the prism of a year of divisions, heightened convictions, and strained dialogue. Cosgrove has not shied away from discussing the tiny nation, nor defending it.

“For me not to speak about Israel from the pulpit would be akin to me not talking about Shabbat or kashrut or any aspect of Jewish life and living,” says Cosgrove. “That said, of course, like every congregational rabbi, I’m the rabbi to the red state and the blue state Jews. But I don’t see that as an impediment, I see that as an opportunity: how does one construct a message about Israel which is unflinching in its support of the state but has eyes wide open to the challenges and pitfalls facing our moment in time?”

Chaim Seidler-Feller, director of the Hartman Fellowship for Campus Professionals and for 40 years Hillel director at UCLA, believes that Yom Ha’atzmaut should be filled with festivity, yes, but also vigorous introspection.

“Birthdays are days for taking stock, for assessment,” he says in our phone call. “What have we accomplished? Let’s celebrate what we’ve accomplished and look ahead and ask where we’re going. And to me, it’s all the more important in light of what’s going on in Israel today. There should be forums! The community could be alive if the community were really healthy. Yom Ha’atzmaut should be a day for taking the temperature of the Zionist vision. Where are we headed? But we don’t do it that way. We have barbecues. We should be asking the big questions of what it means to have a state and a sense of responsibility to The Other.”

He stresses that when a people gains self-sovereignty, it is in charge not just of schools and sewage systems, but of the nation’s character.

“What an enormous opportunity and a burden that we have,” he continues. “To me, that’s the religious significance of having a state: that Jews have returned to the burden of governance. And that takes into account not just all of the mundane structures of running a society, but also that you have minorities that you have to deal with.”

Some remind me that the Palestinians, see our Independence Day inversely: Yom Ha’atzmaut is “The Nakba” – meaning “The Catastrophe.”

Cosgrove says rabbis should talk about that impasse. “A great rabbi, Arthur Hertzberg, once said, ‘One cannot affirm one’s certainties without encountering the counter-certainties of the other.’ We do a disservice to our children and our communities by framing history only from our perspective. Because from the moment they arrive on a college campus, they are going to hear a competing narrative.”

I ask whether he believes it’s appropriate for rabbis to broach the contradictory prisms of Israeli independence and The Nakba.

“Our first task,” he responds, “is to communicate love and loyalty and knowledge of the Zionist story, dating back to Chapter 12 of Genesis with the promise of the land. But at the same time, we can’t have blinders on to the fact that others tell the story differently.”

It’s clearly delicate these days — to hear the story differently with any equanimity, because the stakes seem so high, the history so hard. There is partiality, passion, and impatience in every viewpoint.

But just as Ari Shavit laid out divergent lenses in his book, “My Promised Land: The Triumph and Tragedy of Israel,” so American Jews have perspectives that cannot be reconciled.

“There will be no utopia here,” writes Ari Shavit about his much-debated country. “Israel will never be the ideal nation it set out to be….But what has evolved in this land is not to be dismissed…This free society is creative and passionate and frenzied… We are irreverent. We are deeply anarchic. And yet, because we are all alone in this world, we stick together.”

Sticking together wasn’t a given last summer among American Jews who disagreed emotionally about the Gaza war. There were endless articles in August about whether rabbis should, or would, take on the subject in their upcoming High Holy Day sermons. Cosgrove received a standing ovation for his.

“Zionism isn’t easy,” he told his congregation on Rosh Hashanah morning. “It takes courage, it takes sophistication, and it takes stamina. You gotta’ want it bad. The easiest thing would be to keep our heads down and hope that someone else will pick up the fight so we can just move on with our lives without anyone noticing. We here know otherwise; we here will do otherwise; we here will hold the line.”

I ask how he responds to congregants discomfited by decisions of a country they hold dear. “Perspective is everything,” Cosgrove replies. “As a liberal, egalitarian, pluralistic rabbi, I certainly have concerns about whether the Judaism I preach and practice is recognized in Israel. About whether or not Israel is going to be able to thread the needle of being a Jewish and democratic state into the generation to come.”

Seidler-Feller says that question goes to the heart of the Jewish blueprint. “Israel becomes a test: does Torah work? When you have no power, Torah is only theoretical. Yom Ha’atzmaut challenges us with a great question: now that we have power, can Judaism be made real?”

For all these deep complexities, watching 11 rabbis —from varying threads of worship— read the Declaration of Independence collaboratively, wasn’t complicated. That was very simple, very stirring.

Watching the cantors was uncomplicated, too. Their voices filled the sanctuary, led by Park Avenue’s powerful (and youthful) senior cantor, the Israeli-born Azi Schwartz, who himself served in the IDF.

“Our hope is not yet lost,/The hope of two thousand years,/To be a free people in our land…”

I thought about those words of Hatikvah, which were written as a poem in 1886 —before there was a state, before it became an anthem. The lyrics seemed, like the balloons, somehow innocent — unfreighted, optimistic, unlike the discourse these days.

Seidler-Feller leaves me with a quote from Britain’s former Chief Rabbi, Jonathan Sacks:

“Sacks said, ‘Zionism had two objectives. One was to create a state. The second one was to create a just society.’ The first one we achieved — gloriously. And the second one we’ve just begun; we’re struggling now with the second one.’ So that’s Ha’atzmaut,” he sums up. “How are we doing in our pursuit of a just society? That is an ongoing effort. It’s a process. You’re never quite there; you’re always striving. The point is to focus on the goal. I wonder these days, do people even know that was — and remains — the goal?”