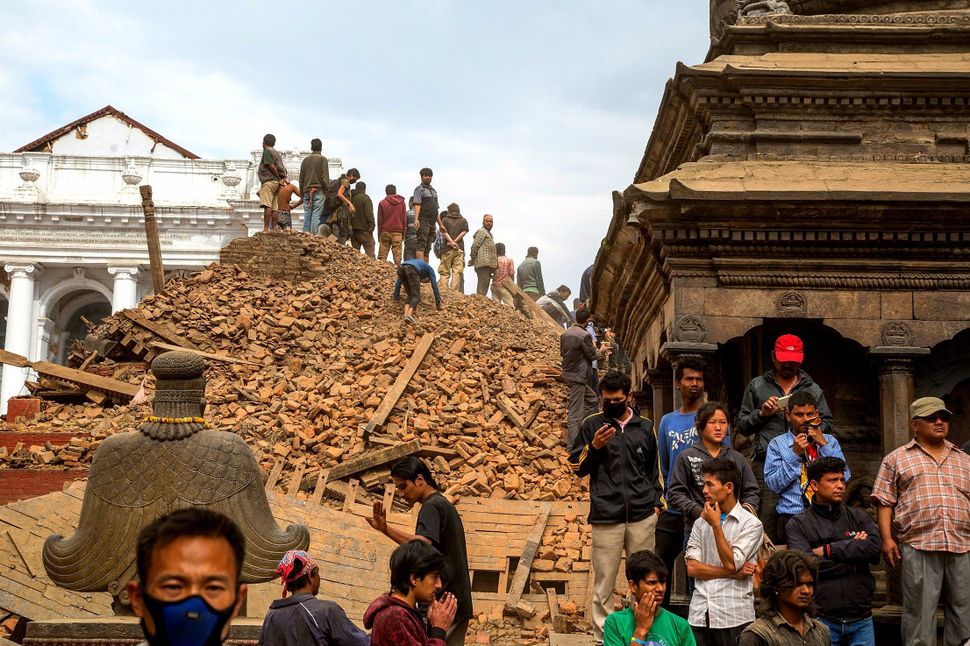 As people worldwide mourn the devastation in Nepal, one rabbi posted a different reaction to Facebook:

All he idols worshiping places n nepal are now destroyed

The post appears to express the rabbi’s pleasure, if not glee, at the collapse of numerous temples throughout Nepal. The Israeli-born Rabbi Yosef Mizrachi is a popular “kiruv” rabbi—someone who specializes in attracting secular Jews to Orthodoxy. He lectures widely, and this Facebook page has 12,000 “likes” (his Hebrew-language page boasts another 53,000).
Mizrachi’s post this morning has already earned him some harsh rabbinical backlash, including from Rabbi Eliyahu Fink, until recently the rabbi of LA’s Pacific Jewish Center:

What’s the worst possible thing a “rabbi” could say this morning? Yep, he went there. When will people stop supporting and promoting this sad, angry, pathetic, mental midget of a man?

I wish that Mizrachi’s sentiments were a rarity. But sadly, he is heir to a long tradition of rabbis finding odd spiritual causes lurking behind natural disasters. For example, Rabbi Ovadia Yosef, the renowned former Chief Sefardic Rabbi of Israel, blamed 2005’s Hurricane Katrina on President Bush’s support for the Israeli evacuation of settlers from Gaza, as well as on the general fact that New Orleans is inhabited by “Blacks” who don’t learn Torah. (His remarks were by the Anti-Defamation League).

So, pathetic as this is, I am not exactly shocked that Mizrachi would say something like that. Indeed, on other occasions Mizrachi has said that one may steal somebody else’s Buddha statue and smash it, and he explained that homosexuals are cursed by God with their urges because they chose to be gay in previous lives.

It’s tempting to compare Mizrachi’s attitude toward other faiths with that of ISIS, which has recently made a show of destroying ancient Babylonian statues and artifacts. In fact, just yesterday Mizrachi posted an image to Facebook showing the black ISIS flag, pointing out that ISIS’s slogan reflects an admirable radical monotheism, and adding in red: “May God save us from allowing murderers to be our teachers, God forbid.”

Yes, Rabbi Mizrachi, ISIS is outdoing us in the competitive field of religious zealotry. I am okay with that.

Reading Mizrachi’s disgusting comments on the catastrophe in Nepal, I feel more acutely the recent loss of my teacher, Rabbi Aharon Lichtenstein, who on many occasions rebuked those foolish rabbis who spoke as if they had a “direct line” to the mind of God. Mizrachi, whose website is called divineinformation.com, is a prime example.

May God spare us from more of his divine information.