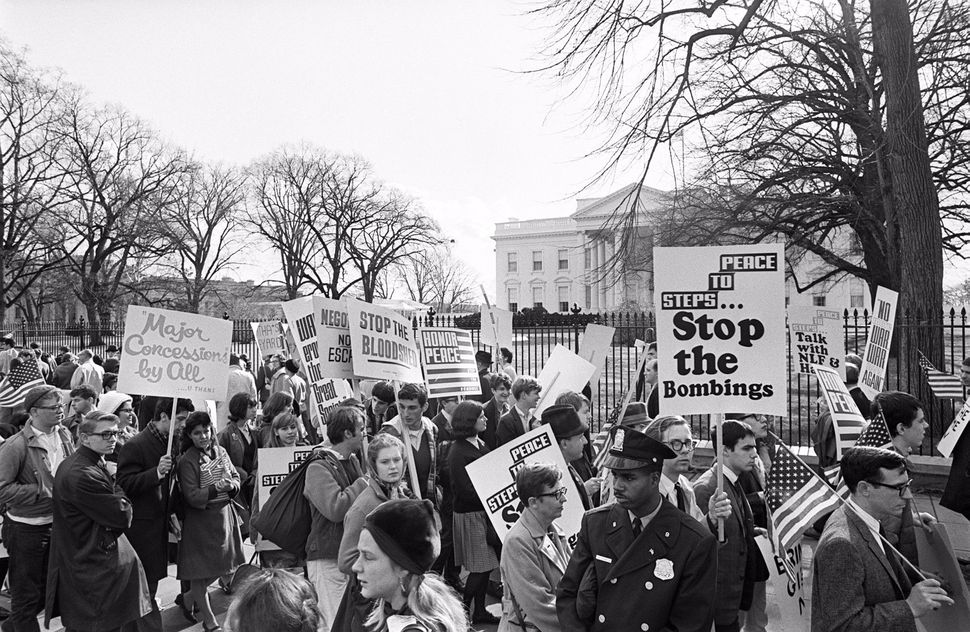 Protesters demonstrate against the Vietnam War just months after the bloody battle that the Pentagon marks as the beginning of the conflict. Image by Getty Images

Like apparitions from a forgotten past, Vietnam War-era helicopters swooped down from the sky above Newnan, Georgia, 40 miles from Atlanta last month.

The vintage choppers landed at the local high school stadium, where pilots told students about the war in Southeast Asia, which took place before many of the teenagers’ parents and teachers were born.

Vietnam-themed classes at the technical school included aerodynamics and rotor blade design, along with history and social studies lessons, taught, in part, through the stories of local veterans.

Left unsaid: Millions of Americans, including many prominent Jewish leaders, opposed the bloody war. Members of the anti-war movement were not invited to speak at the Newnan events, according to a school spokesman.

The school’s lessons and related events are just a small part of the U.S. Department of Defense’s nationwide commemoration of the war’s 50th anniversary (which the Pentagon dates from the landing of the first expeditionary force of Marines at Da Nang in March 1965).

Simply put, the Pentagon is pushing to whitewash history. It hopes schools, civic organizations and state and local governments will hold ceremonies, mount exhibits and promote a version of history that honors those who fought the war while banishing from memory those who opposed it. 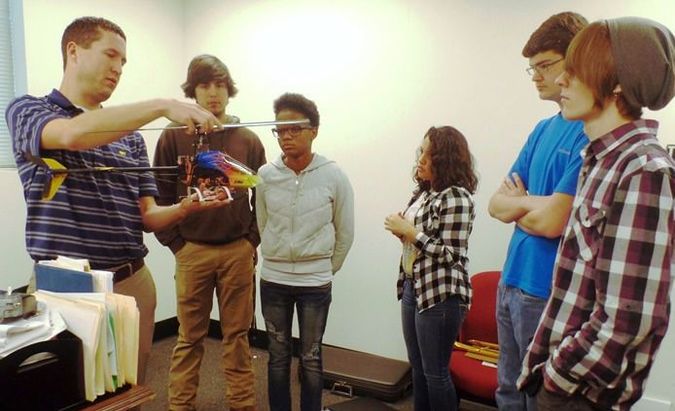 A U.S. Army soldiers demonstrates the workings of helicopters to Georgia high school students as part of outreach efforts surrounding the 50th anniversary of the Vietnam War. Image by Courtesy of Newnan High School

From the detailed timeline on its website devoted to the commemoration, you would not learn that Americans were protesting American involvement in Vietnam years before Congress authorized U.S. military action with the Gulf of Tonkin Resolution.

You wouldn’t learn that within a month of the Marine landing in Da Nang 25,000 people gathered in Washington to call for the war’s end.

From three scant references to nationwide demonstrations in 1969 and 1970, you’d have no clue that what followed the introduction of American troops was unremitting protest, including student strikes at 500 campuses and civil disobedience that ranged from sit-ins, to efforts to halt troop trains to draft-card burning.

And, strangely, there is little mention of the 58,000 American dead, much less the millions of Vietnamese soldiers and civilians who perished in the ill-fated Cold War conflict.

In an effort to redress this one-sided account, some 1,500 people (I am one of them) most of them anti-war activists, but also veterans who fought in Vietnam, have signed a letter to Lt. Gen. Claude M. Kicklighter, who is overseeing the commemoration, asserting that:

“No commemoration of the war in Vietnam can exclude the many thousands of veterans who opposed it, as well as the draft refusals of many thousands of young Americans, some at the cost of imprisonment or of exile until amnesty was granted. Nor can we forget the millions who exercised their rights as American citizens by marching, praying, organizing moratoriums, writing letters to Congress, as well as those who were tried by our government for civil disobedience or who died in protests. And very importantly, we cannot forget the millions of victims of the war, both military and civilian, who died in Vietnam, Laos and Cambodia.”

The signers and others will hold their own Vietnam Peace Commemoration in Washington on May 1st and 2nd, to conclude with a vigil at the Martin Luther King Memorial.

Among the nine individuals to be honored at the commemoration as “elders” of the peace movement are Daniel Ellsberg, Judith Lerner, Marcus Raskin, Arthur Waskow and Cora Weiss. A leader of Women’s Strike for Peace, Ms. Weiss said in an interview, “We never put ourselves out as Jews,” but the majority of members were Jewish. She also pointed to the late Rabbi Leonard Beerman’s role as head of Clergy and Laity Concerned on the West Coast, saying the organization was crucial to the antiwar movement.

The Pentagon’s official website includes links to 112 press releases of commemorative activities nationwide. The peace commemoration is not among them.

This is not just historical amnesia: for those of us who as young men and women acted to oppose the war, it is the theft of a past that profoundly changed our lives, reshaping our idea of America, challenging our sense of duty, testing our courage, forcing us to take a stand.

But how Vietnam is remembered matters to more than those aging warriors who marched and risked jail and exile to oppose the war or to those who fought in the jungle: it matters to Americans now and to those to come.

The anti-war movement transformed the nation. Because of it, two presidents left office in disgrace. The protests forced Lyndon Johnson to abandon his race for a second term; they started the sequence of events that culminated in Watergate and Richard Nixon’s resignation.

What’s at stake is not only the past, but the future. One lesson we began to learn five decades ago is that we need to cultivate a healthy suspicion of candidates’ promises and government claims. Another is that there are limits on American power. And, perhaps most important of all, that an aroused public can bring about change.

The relevance of those lessons in today’s world is clear. They must not be erased.

Bernard L. Stein was editor of The Riverdale Press, where he won a Pulitzer Prize for editorial writing, and of The Hunts Point Express and Mott Haven Herald, South Bronx community newspapers staffed by students at Hunter College and the CUNY Graduate School of Journalism.