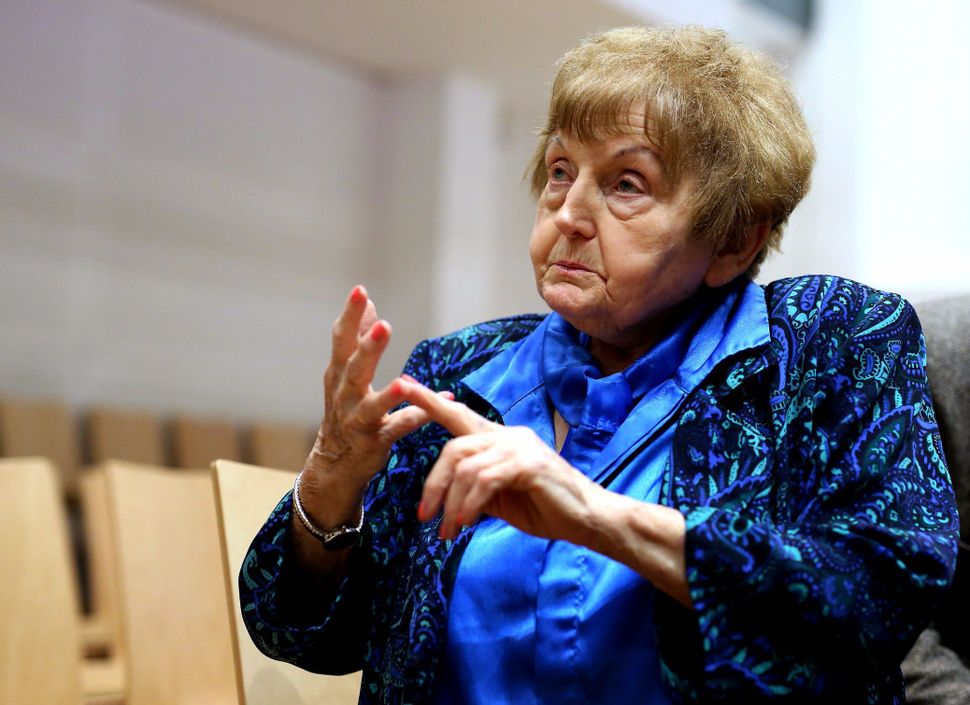 More than half a century after the Holocaust, is it right — or even possible — to forgive?

As the granddaughter of Holocaust survivors and refugees, I find myself asking this question as I read about the recent trial of Oskar Gröning — aka “the accountant of Auschwitz” — a man who cannot easily be crammed into a box marked “good” or “evil.”

Gröning, a 93-year-old former SS officer who was put in charge of collecting money from incoming Auschwitz prisoners between 1942 and 1944, is charged with criminal complicity in the murder of 300,000 Jews. Having already publicly admitted his moral (but not criminal) guilt, his chilling, detailed accounts in court of his time at the infamous concentration camp paint him as a bystander rather than a perpetrator. :

The atrocities he witnessed, he said, included one night in December 1942 when he was roused from bed to help hunt down fleeing prisoners. In the process, he told the court, he saw prisoners herded into a farmhouse and an SS superior tip gas out of a can into an opening. The screams of the prisoners inside “grew louder and more desperate, and after a short time became quieter and then stopped completely,” Mr. Gröning said.

This admission was quickly followed by a disclaimer: “That was the only time I saw a complete gassing. I did not take part.”

Complicating matters, one of the 49 co-plaintiffs in the trial, Auschwitz survivor Eva Mozes Kor, publicly forgave Gröning right there in court. She went so far as to call for a stop to the prosecution on German national TV, arguing that doing so would encourage other former Nazis to come forward with their own stories and refute Holocaust revisionists. Her co-plaintiffs reacted by releasing a statement opposing Kor and severing ties with her sympathies.

These events surrounding the Gröning trial prompt me to wrestle with a set of ethical quandaries: Does Gröning’s insistence on his role as a bystander and not a perpetrator change the degree of his guilt? Does the fact that no one can truly corroborate this make a difference? And, most of all: Who holds the power to forgive or withhold forgiveness in the first place?

The writings of philosopher Hannah Arendt come to mind in this context. In Eichmann in Jerusalem, Arendt coined the term “banality of evil” while describing the psychology behind the execution of monstrous acts during the Holocaust:

Evidence of this mindset, even decades later, pervades Gröning’s testimony — as we see in his account of the first and only gassing he purported witnessing. A cynic might say that Gröning seems less horrified by the deaths he witnessed than by the burden of being a witness, of what he is now forced to remember. A non-cynic might say that his burden is as violently true as Kor’s; like her, he was a slave — even a victim — to an industry of death.

Who’s right? As I contemplate the nameless denizens who exterminated my family — who, before they were SS officers or bystanders choosing to turn a blind eye, were my relatives’ neighborhood bakers, or their children’s teachers, or even friends — I wonder: were they evil or were they, simply, trapped?

My mother, discussing the Gröning trial with me by phone, shed some light on this by telling me a story about a college course she took on the Holocaust and forgiveness, as taught by three theologians: a Catholic priest, a Methodist minister, and a rabbi. The last session of the class was spent attempting to answer the question the course itself posed. A fourth of the class — all Christian seminary students — posited that yes, forgiveness towards the perpetrators of the Holocaust is not only possible, but should be openly practiced, relying on Christian mercy as an underlying argument. The rest of the students — mostly Jews — vehemently argued against this.

My mother was full of rage. “These are our people!” she cried. “They can’t possibly understand.”

None other than the rabbi countered her. “No, you can’t possibly understand. The only ones who can understand are the victims. And when they are gone, no one has that right.”

In the end, I think this anecdote holds true. The fate of Oskar Gröning will be determined in a court of law. Even now, it is not our place to decide who can or cannot be forgiven; only those who were there have that right. Instead, it is our place to accept whatever happens, and one day, when the last survivors are gone, to remember what we’ve lost.