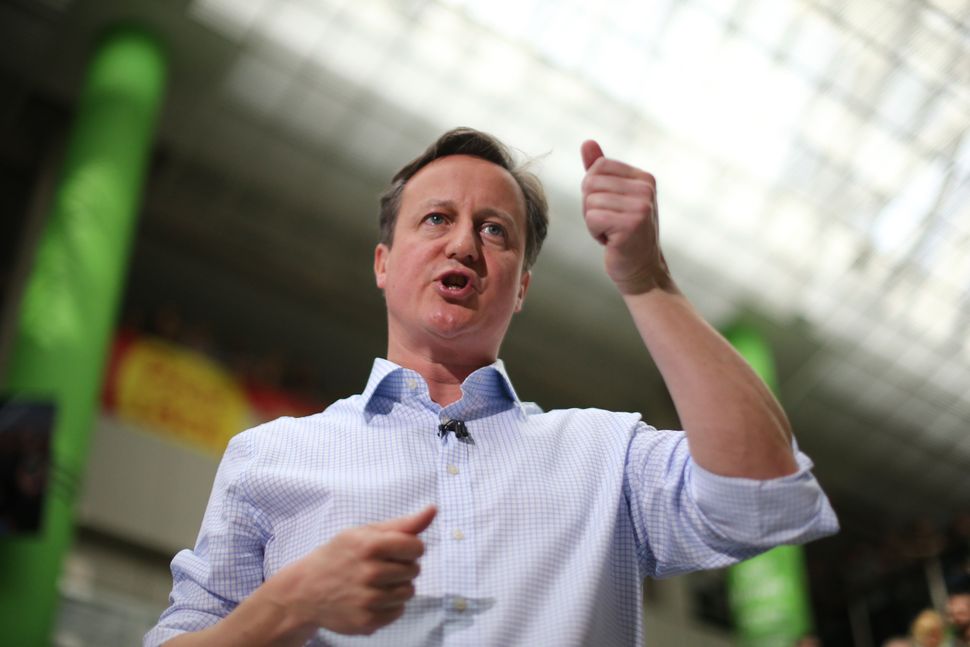 If it emerges that a secretive campaign adviser to Britain’s Conservative Party spent a few weeks in Israel in February and March, no one will be very surprised. Whether or not such a person exists, one thing is very clear on the eve of next week’s U.K. parliamentary election: the successful reelection strategy used a few months ago by Benjamin Netanyahu is nearly identical to the one currently being orchestrated by British Prime Minister David Cameron. And while it’s impossible to predict who will win next Thursday, in what has been the most unpredictable campaign in British history, there are already signs in the polls that the Bibi strategy is working for Cameron as well.

These are the three cardinal rules of winning reelection as a sitting right-wing prime minister in 2015.

Rule One: Since you’re already prime minister, don’t appear in a direct debate with your opponent – so as not to confer the status of potential leader upon him. You are a known quantity and have higher personal approval ratings. He is the one who has to build his image and has more to lose, so let him run around, overexposing himself, giving interviews to every wandering microphone, and making the inevitable mistakes. Limit your controlled media appearances to the most crucial strategic moments.

While the Israeli media criticized Netanyahu for refusing to give more than a handful of interview throughout most of the campaign, this policy focused a merciless spotlight on his challenger, Zionist Union chairman Isaac Herzog, who, despite gradually improving his image over time, remained in the eyes of many voters a weak alternative to the prime minister – who dwarfed him with his international stature as the man invited to speak before Congress.

When Netanyahu finally granted the media access in the last days of the campaign, it was with a massive blitz of interviews that pushed through a focused message and still refused to debate Herzog. The closest they came was when Channel Two interviewed them one after another, creating the unforgettable image of a tiny Herzog sitting in the studio, dwarfed by a smiling Netanyahu on a massive screen behind him, about to go on air. Nothing could have better illustrated the comparison formed in voters’ minds.

Cameron is playing a similar game, though in a different manner. He gives interviews and meets the public, but his appearances are deliberately fewer than those of his rival, Ed Miliband. The Labour Party leader can’t seem to stop talking, and cheapened himself by going up against leaders of the smaller parties in a live TV debate. He even subjected himself to an interview in the kitchen of anarchist comedian Russell Brand.

In contrast, Cameron – while being attacked for not openly engaging with the public – manages constantly to be seen in a prime ministerial setting. He also refused to debate Miliband one-on-one, but did turn up to a debate of seven party leaders, reinforcing the image of Miliband as just another politician, not a true alternative.

Labour Party leader Ed Miliband. Cast in the Isaac Herzog role? Photo by AP Miliband’s personal rating has grown over the last few months from the abysmal depths they were at last year (from -56 last November to -18 last month), but that was almost inevitable. His increased popularity, however, seems to be only among those who were planning to vote for Labour anyway, as the party still has not broken through in the polls.

Rule Two: Build up an axis of evil around your main rival, portraying him as a weak and gullible figure, easily manipulated by dark forces eager to sabotage the country’s strategic interests and which will lead to its eventual destruction. Don’t assassinate his character but damn him by association, leading to the conclusion that he means well but can under no circumstances be entrusted with the responsibility of leading a nation.

Netanyahu constantly portrayed Herzog and running mate Tzipi Livni – two essentially centrist politicians – as limp-wristed lackeys of the far-left, incapable of standing up to international pressure, controlled and financed by shadowy foreign NGOs. And, of course, he had the resurgent Joint List of Israeli-Arab parties to link to them (even though there was never any question of them ever being part of a Herzog coalition), allowing him to appeal to right-wing voters’ fears and latent racism. The unforgettable Facebook message on Election Day, in which he warned of “droves of Arabs” descending on the polling stations, was just the coup de grâce.

Cameron is well-served in this election by the polls predicting that the Scottish National Party (SNP) is about to sweep nearly all the constituencies in Scotland, almost certainly creating a situation in which Miliband can form a government only with the backing of the SNP – whether as coalition members or, more likely, supporting a minority government from the outside. Cue an “us-or-them” message that was identical to the one used by Netanyahu, complete with cartoons of a tiny Miliband in the pocket of the SNP leadership. Of course, there is nothing wrong with a coalition government; Cameron currently has one with the Liberal Democrats. But the fact the SNP’s core ideology is the belief that Scotland should break away from Britain allows Cameron to imply that there is an illegitimacy about Labour partnering with them in government.

Rule Three: In a polarized election, there’s no point trying to tack to the middle in search of more votes. The potential for growth is on the far-right, where those who think you are not radical enough can be scared into voting for you, for fear of letting in those forces of darkness lurking on the left. Make it clear there’s only one alternative to staving off national disaster.

In the months leading up to Election Day, Naftali Bennett’s far-right Habayit Hayehudi was riding high in the polls, siphoning Knesset seats from a tired and discredited Likud. In the final week of campaigning, though, the polls helped Netanyahu ram home the message to those voters that if they didn’t come “home” to Likud, the left would win.

Cameron faces a similar situation on his right. The United Kingdom Independence Party (UKIP) received 3 percent of the vote in 2010, and has never won a seat in a general election (although it did win two by-elections last year). In this campaign, however, it is polling at around five times its best-ever result, and most of those voters are former Conservatives who feel Cameron is “too soft” on immigration and believe Britain should leave the European Union.

UKIP is unlikely to win more than a handful of seats next week, but the votes lost to the Conservatives will almost certainly cost Cameron dozens of other seats, which will likely be won by Labour under Britain’s first-past-the-post electoral system. A Conservative victory can only be achieved by bringing home a sizable chunk of the UKIP vote. The constant warnings of a Labour government controlled by Scottish nationalists is an air-raid siren to those voters tempted away by UKIP’s populism and Europhobia, alerting them that there is a more immediate threat than the bureaucrats of Brussels.

It worked for Netanyahu. He trailed Herzog in the polls by an average of three seats five days before the election. But the Herzog-Livni Zionist Union failed to break out of the old center-left strongholds, and Netanyahu went on to win by a margin of six. Five of those seats came from Israelis who originally planned to vote Habayit Hayehudi, and the rest from other right-wing parties.

Cameron’s Tories are still near-level with Labour in most polls. But with less than a week to go, there are the first signs of a possible Conservative surge and a dip in support for UKIP.

On March 17, it was the wavering right-wingers casting their ballots at the 11th hour who won it for Netanyahu. If Cameron wins on Thursday, it will almost certainly be in the exact same fashion, with enough “Ukippers” in marginal seats changing their minds at the last moment, fearful of the Scots. Who knows, Cameron could even win a parliament majority if “Bibi tactics” work for him.