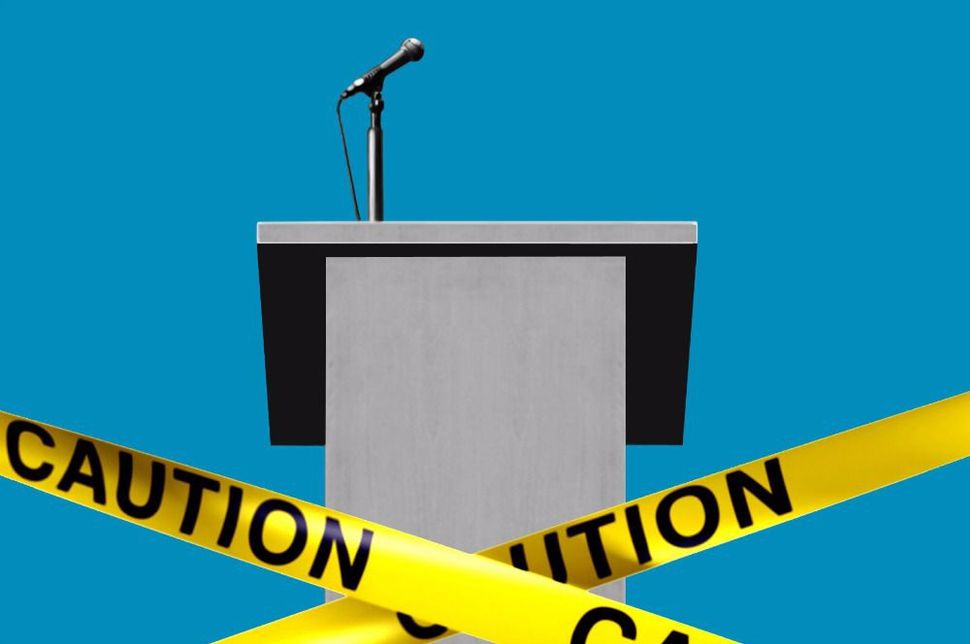 The Jewish community, here and in Israel, is having a First Amendment moment, struggling with what is acceptable speech and who are acceptable speakers. It’s not quite as bad as 1656, when the Dutch philosopher Baruch Spinoza was expelled from his community because of his then-radical views. But communal and governmental mechanisms are at work to make it uncomfortable, isolating and sometimes costly to say certain words and promote certain ideas.

The latest example is the new Israeli law, upheld just recently by the high court, that turns advocating the boycott of Israel into a civil offense, subject to a fine by the finance minister or to a potential lawsuit from an aggrieved business owner.

Meanwhile, on campus and in synagogues across this country, speakers and other invited guests are scrutinized for any sympathetic gestures towards the boycott, divestment and sanction movement known as BDS. International organizations and foreign countries will be similiarly scrutinized if amendments to a trade bill are approved by the U.S. Congress.

Right-wingers are viciously attacking communal leaders for privately supporting the New Israel Fund. Left-wingers so vehemently hammered a couple of Jewish gay businessman for hosting Sen. Ted Cruz in their home that the hosts were forced to apologize.

Is it not possible to disagree with a candidate on gay and lesbian rights and still be interested in what he has to say about Israel? We are so busy drawing lines around acceptable speech and behavior that our civic space for dialogue is shrinking to the size of a shekel coin.

This is why we as a community need a renewed commitment to free speech, as infuriating, as risky and as challenging as it may be.

Some red lines are obvious and warranted. Speech that promotes violence or treason should be punished. Individuals must have a right to protect themselves against harmful, invidious libel and slander.

But that is not at issue in most of these cases. At issue are the censorship of ideas and a presumption of guilt by association that has replaced critical and nuanced judgment.

As support for BDS has become so much of a litmus test for acceptability, we wonder if the acronym instead stands for Ban Direct Speech.

The Forward is on record opposing the BDS movement, because we believe that it is counter-productive and unfairly singles out Israel for opprobrium, and because some of its leaders and supporters do not believe in Israel’s right to exist as a Jewish state. Those who advocate boycotting goods only from the occupied territories have a more persuasive argument, but in its narrow focus, it is also more difficult to implement and enforce.

Nevertheless, we recognize that this movement is a nonviolent response to a 47-year-old occupation. At a time when both Israeli and Palestinian intransigence has stifled any attempts at a negotiated settlement, we can understand the appeal of using diplomatic, economic and cultural isolation to upend the status quo.

Support for BDS is fueled not only by those who don’t want there to be an Israel. It is also fueled by the vacuum created by leadership in Jerusalem and Ramallah unwilling to take bold steps to create Palestinian sovereignty while ensuring Israel’s safety. Instead of banning all talk of boycott, we should engage it, counter it, defeat it in the marketplace of ideas, and come up with more compelling alternatives.

A renewed commitment to free speech would begin to break down the hypocrisy that often accompanies attempts to decide who is in and who is outside the proverbial communal tent. When a Labor government was in power in Israel, it was kosher for advocacy groups here to disagree with its policies. Why, then, is it treyf for Jewish groups to challenge the policies of the current Likud government?

A renewed commitment to free speech also asks more of the individual listener. It’s so much easier to have someone else decide whom to pay attention to and whom to disregard; whom to believe and whom to ignore. It’s so much more comforting to hear an echo of one’s predilections than a sharp rebuttal of them. That’s why liberals watch MSNBC and conservatives are fans of Fox.

We need, instead, to become more comfortable with nuance and confusion — with someone who can disagree completely with Ted Cruz on marriage equality and be intrigued by his position on Israel, for instance. More free speech requires more individual work.

Here’s an example: Melanie Phillips, a frequent commentator on British television and in newspapers, is making the rounds of synagogues on an AIPAC sponsored tour. She has strong views on Israel’s security and on the growing anti-Semitism in Europe that probably will be well received by more hawkish listeners. But she’s also publicly opposed to same-sex marriage, doesn’t believe in climate change, and has supported a discredited doctor who has argued against vaccines.

Should those views disqualify her from speaking on Israel and anti-Semitism? No. But they could cause a listener to question Phillips’s judgment and critical thinking. More work, but perhaps much more insight. That’s what a commitment to open conversation entails.

Some Israelis are old enough to remember the widespread Arab League boycott that made it impossible even to buy a Pepsi until trade loosened up in the early 1990s with the Oslo Accords. It’s understandable that they are sensitive to speech promoting the same sort of economic hardship now.

But in a world as wired and as sophisticated as ours, censorship simply cannot prevail. If American Jews can’t change one onerous Israeli law, at least we can model a more generous and less hypocritical conversation here.