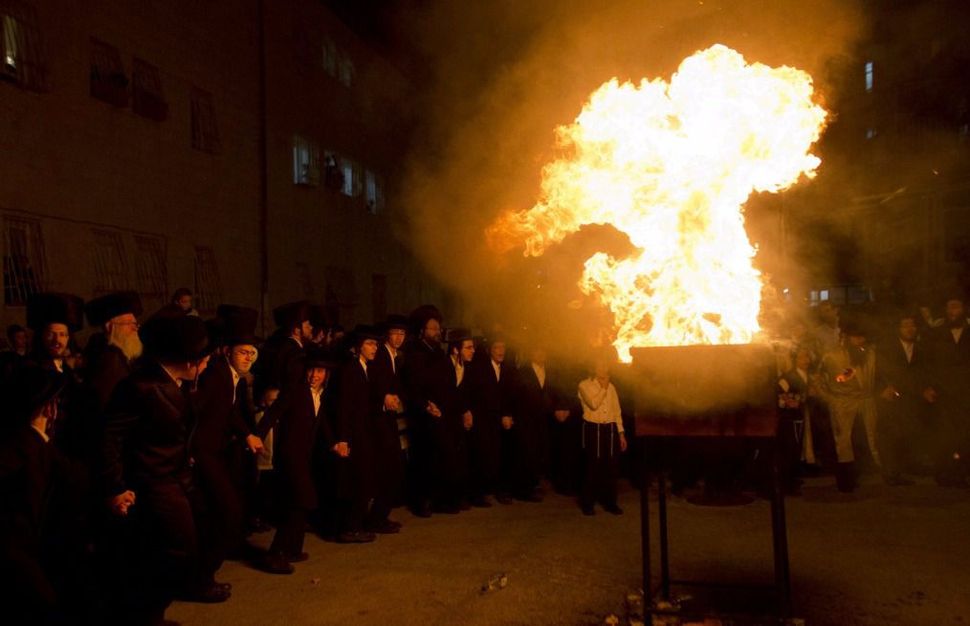 Twenty four thousand students who studied with the famed 2nd Century Rabbi Akiva were killed by a terrible plague.

What sin made them deserving of such a wipeout?

“They did not treat each other with respect,” the Talmud says plainly.

What does the holiday of Lag B’Omer, which arrives this evening, have to do with Rabbi Akiva’s students? It marks the lifting of the plague that killed them, and the anniversary of the death of Rabbi Shim’on Bar Yohai, one of the students who survived.

The fact that Rabbi Bar Yohai – or Rashbi, as he’s known – was spared, must in some part be due to his respect for fellow Jews.

That, to me, is a thread of the elusive Lag B’Omer that I can grab onto: it’s a holiday that elevates consideration of one another, and cautions against what happens when we don’t.

This reverberated last week after the Supreme Court heard arguments on gay marriage, when on Facebook, I stumbled for the first time upon the Declaration on the Torah Approach to Homosexuality, which in 2011 was signed by more than 100 Orthodox rabbis, including several esteemed faculty at New York’s Yeshiva University.

“We emphatically reject the notion that a homosexually inclined person cannot overcome his or her inclination and desire. Behaviors are changeable. The Torah does not forbid something which is impossible to avoid. Abandoning people to lifelong loneliness and despair by denying all hope of overcoming and healing their same-sex attraction is heartlessly cruel.”

The entire document reads, in my view, as “heartlessly cruel,” echoing exactly the ancient error of Akiva’s students: profound disrespect.

It insists that gay children are victims of “emotional wounds” and should receive psychological help to eschew sin and return to God.

Lag B’Omer’s story may not be about discrimination, but it is about intolerance. That’s a message worth digesting on this holiday.

Lag B’Omer means literally the 33rd day of the Omer. The Omer is the 49-day span between Passover and the giving of the Torah on Shavuot.

We have supposedly been in mourning for Akiva’s students during this time period, a weight that lifts on Lag B’Omer. We are now allowed to resume celebrations — namely picnics, live music, haircuts, and weddings.

But when the Torah Declaration appeared on someone’s Facebook stream, just four days before happy nuptials are permitted to resume, I couldn’t help but think about the gay marriages still prevented and the prejudices still ingrained in my own community. The sin of disrespect is alive and well.

“It requires tremendous bravery and fortitude for a person to confront and deal with same-sex attraction,” the Declaration continues. “For example a sixteen-year-old who is struggling with this issue may be confused and afraid and not know whom to speak to or what steps to take. We must create an atmosphere where this teenager (or anyone) can speak freely to a parent, rabbi, or mentor and be treated with love and compassion. Authority figures can then guide same-sex strugglers towards a path of healing and overcoming their inclinations.”

Perhaps it’s too fitting that I will be attending a close friend’s gay wedding in Brooklyn on Shavuot itself — the closing night of the Omer.

Gay marriage may seem far afield from Lag B’Omer, but wedding imagery is integral, as is the notion that respect is required to get close to God.

This is the trail I followed as I unpacked this holiday, and I hope I don’t lose you:

Rashbi’s yartzheit, celebrated on Lag B’Omer, is called an “Hillula,” (original meaning “wedding celebration”) because he announced that he would marry God on the day of his death. More specifically: he’d wed the feminine aspect of God – the “shekhinah.”

The emphasis on God’s feminine nature, a radical idea when it was introduced in the Middle Ages, first gets explored in detail in the Zohar, the chief text of Kabbalism, Jewish mysticism.

Rashbi is said to be the Zohar’s author, though in reality he isn’t: the mystical Torah commentary was based, in part, on Rashbi’s teachings, but composed chiefly by a rabbi named Moses de Leon in 13th century Spain.

But the legend endures that Rashbi wrote it, and that he revealed the Zohar’s “deepest” secrets on the day he died.

To understand the Zohar, (which I don’t,) I turn to the expert: Kabbalah scholar Daniel Matt, based in Berkeley, California, who has devoted 18 years to translating the Zohar from the Aramaic to the English, with elucidating commentary. He is currently completing the ninth volume of his series, The Zohar: Pritzker Edition.

“Rashbi sees his own death as his union with the shekhinah,” Matt explains. “He said, ‘I see God is coming and the souls of the righteous are coming and they’re all coming here to participate in my hillula.'”

It appears that “the righteous” — those who do good deeds and live ethically — are the ones who will walk down the proverbial aisle with God.

“By performing the mitzvot,” says Matt, “we stimulate the divine union.”

Does God, masculine or feminine, really need us in betrothal or partnership?

“The Zohar’s notion is that God cannot be whole or manifested in the world without human ethical behavior — living virtuously,” Matt says. “That’s one of its main teachings.”

Again, the road leads back to respect. Maybe that’s too pat, but on this esoteric holiday, I’ll take it.

Still, the notion of divine union is hard for me to conceptualize — God married to Rashbi or to anyone.

But Matt reminds me that, according to the Zohar, every Sabbath is a wedding between God’s masculine side (HaKadosh Baruch Hu — “The Holy One, blessed be He,”) and God’s feminine side (Shekhinah,) and when the Torah is received at the end of the Omer, on Shavuot, it’s the most dramatic wedding of all. “According to the Midrash on the Song of Songs,” Matt says, “Israel — the Jewish people — is married to God on Mount Sinai. And just before Rashbi’s death, he is participating in that union himself.”

Akiva’s 24,000 students missed that divine marriage because they weren’t righteous.

Rashbi was righteous, but not without his own earlier missteps.

Rabbi Jill Jacobs, executive director of the Manhattan-based T’ruah: The Rabbinic Call for Human Rights, which organizes rabbis and cantors on behalf of human rights, tells me the story of Rashbi in the cave:

When he criticized the Romans for outlawing Torah study, Rashbi was sentenced to death and escaped to a cave with his son-in-law.

He spent the next 12 years in the cave, studying Torah so deeply, that when he emerged, he was appalled that his fellow Jews weren’t also studying obsessively and he vaporized the farmers with his mere gaze.

“God chastised him,” Jacobs recounts, “Saying to Rabbi Bar Yohai, ‘Are you out to destroy the world? Go back in your cave.’ So he has to go back for another year until he’s able to deal with human beings. For me, that’s a reminder that it’s not just about living this perfect, wholly religious life that is separated from humanity, but that we actually have to be able to live with humanity, and engage with the human world. That’s actually what God wants from us. Not just a life of Torah.”

It’s yet another lesson in respectful coexistence: life should be deepened by Torah, not blinded by it.

The Declaration on the Torah Approach to Homosexuality seems to reflect Rashbi’s initial fiery gaze — so consumed with Torah it overlooks humanity.

“The Torah makes a clear statement,” says the Declaration, “that homosexuality is not an acceptable lifestyle or a genuine identity by severely prohibiting its conduct. Furthermore, the Torah, ever prescient about negative secular influences, warns us in Vayikra (Leviticus) 20:23 “Do not follow the traditions of the nations that I expel from before you…” Particularly the Torah writes this in regards to homosexuality and other forbidden sexual liaisons.”

This week, thousands of Israel’s Orthodox will dance and light bonfires in Meron, Israel — thought to be Rashbi’s gravesite.

They will be marking his hillula — his wedding — when others still cannot marry.

They will be remembering the students who failed to show respect, without recognizing how many among them commit the same offense today.

They will be lifting up a great teacher of Torah, without acknowledging that at one point, he took Torah too far.

Maybe it’s overly convenient to connect all these threads for Lag B’Omer — the students’ ancient sin and its contemporary repetition; the Zohar’s message that only an ethical life leads to God’s love; the Torah Declaration I stumbled upon on Facebook just before Lag B’Omer and my friends’ gay wedding scheduled for Omer’s end.

But Matt says this holiday invites our own interpretations.

“One of the attractive things about Lag B’Omer is its undefined character,” says Matt. “It’s unlike any other holiday; there’s not really a clear specific reason for it. It’s not mentioned in the Torah or Tanach or Talmud….So it invites creativity.”

Some rabbis teach that the 24,000 killed were actually Jewish rebels, slaughtered because they resisted Roman tyranny, as Akiva did.

Some teach that the holiday is about barley and wheat sacrifices that were brought to the Temple during Passover and Shavuot.

Like so many Jewish holidays, there are several layers instead of one.

I choose, this year, to make Lag B’Omer about the Talmud’s plain phrase about Akiva’s students.

“It says, ‘They did not treat each other with respect,’” Rabbi Jacobs tells me over the phone as she looks up the tractate. “‘And ‘the world was desolate.’”