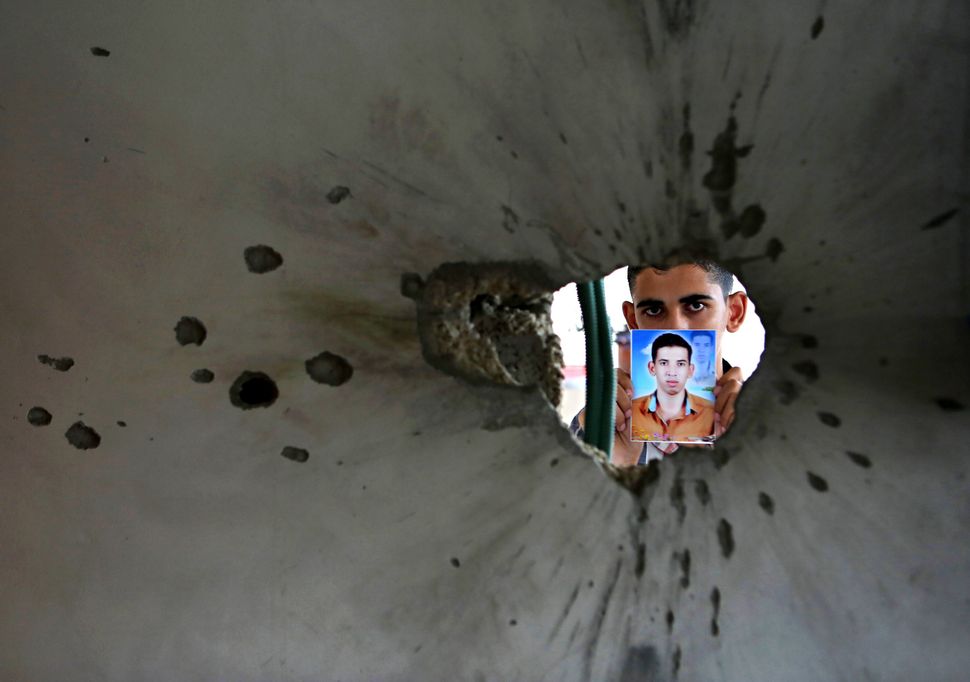 ‘My feeling after Operation Protective Edge was not so good. Mostly I felt bad from a moral perspective…. We shot at houses just because. We shot at cars, at ambulances — doing things I was raised not to do — not to kill the innocent…[but] here I was formally told ‘Kill everything in your proximity.’ I did it, and I regret it.”

These words, spoken by a young male soldier, are part of the latest set of Israel Defense Forces veterans’ testimonies, released by Breaking the Silence in early May. The Israelis who testified, more than 60 of them, are speaking out for the first time about what they experienced in Gaza last July and August.

With summer once again around the corner, Operation Protective Edge is nearly a year old. Yet not much has changed on the ground: Hamas still controls Gaza, and Benjamin Netanyahu is still Israel’s prime minister. The feeling in Israel is that the next operation might come at any moment; if not this year, then the next. And if it does — or even if it doesn’t — the soldiers’ accounts demand that a set of questions be addressed: What are the IDF’s ethical rules for warfare? What were they during the last Gaza invasion? The answers are not simple.

In 1994, Israel Prize winner and ethicist Asa Kasher wrote an initial version of the IDF Code of Ethics. When Kasher’s version was later found to be cumbersome and impractical, a rewrite committee was appointed. In 2000, a group of philosophers and ethicists — among them well-known ethicists Professor Avi Sagi and Professor Moshe Halbertal — redrafted the document. The new version, renamed “The Spirit of the IDF,” was refitted both in form and in substance, and was officially adopted. It is the version taught today in IDF training classrooms and carried in the pockets of IDF soldiers. Though not legally binding, each and every soldier is obligated to follow these ethical standards.

The discrepancies between the 1994 and the 2000 versions have implications on the ground. Each takes a different approach to the IDF’s responsibility for the lives of enemy noncombatants. The 2000 “Spirit of the IDF” version pushes Israel’s military into a moral high ground, maintaining that all civilians are out of bounds in warfare and implying that a soldier’s responsibility is therefore as follows:

Kasher, however, suggests that there is a distinction to be made between “their” civilians and “our” civilians. Indeed, in the 1994 version, and a more recent 2004 re-write that he co-authored alongside current head of Military Intelligence Amos Yadlin, Israeli soldiers’ lives take priority over those of enemy innocents.

The philosophical conflict behind these two versions was hashed out in the pages of The New York Review of Books in 2009, but disagreement persists over what a soldier’s priority should be on the battlefield.

The code’s most often cited clause — on “Purity of Arms” — is most in question. The language for the clause from Kasher’s early version cites the need to “limit the use of force so as to prevent unnecessary harm.” The 2000 version requires, by contrast, that soldiers use force “only to a necessary extent” and that soldiers “do everything possible to prevent harm” to noncombatants.

It is hard, perhaps impossible, to know exactly how ethics factor into each IDF decision on the ground. But there is solid evidence to suggest that, at least in Operation Protective Edge, Kasher’s version of the IDF code dominated practice. One of the clearest indicators is the way in which artillery was used during this operation.

Artillery shells, weighing 40 kilograms each, are highly imprecise. One former artillery corps soldier compared their use to “playing a game of Russian roulette.” These modern-day cannon balls were shot at record numbers into Gaza last summer, at astonishing rates. Cast Lead, the 2009 operation, saw 8,000 of these shells; Protective Edge recorded at least 32,000. At one point, the neighborhood east of Gaza City, Shujaiyeh, was hit with 600 shells in one hour.

In 2005, when Israel moved its artillery closer to Gaza, Ran Cohen, who at the time was a Knesset member from the Meretz party, denounced shelling Gaza with artillery as a war crime. Artillery fire is not the kind of tactic that attempts to prevent civilian deaths — it aims to protect the lives of soldiers. The recently released Breaking the Silence testimonies confirm this, noting that while the protective distances for artillery shell fire would be lowered when necessary for civilians — sometimes cut in half, bringing them closer to harm’s way — those same distances remained stable for soldiers. In other words, consistent with Kasher’s ethical model, soldiers’ lives were put before Gazan noncombatants’.

The influence of Kasher’s code is not only in evidence on the ground. In April, former IDF spokesman Avi Benayahu gave a talk at Tel Aviv University, where he described Kasher’s hierarchy exactly: “We place our civilians first, our soldiers second, their [enemy] civilians third and fourth are their terrorists.” Earlier in his speech, he noted cryptically that “we don’t want a gap between what is written on the wall [the IDF Code of Ethics] and what takes place on the ground…. So we need to change [what is written on] the wall.”

Benayahu is not alone in believing that this is the de facto code. Ilan Paz, a retired brigadier general who was the head of Israel’s Civil Administration, pinned responsibility for the high civilian casualties in Gaza this past summer directly on Kasher’s head. Paz had been a part of Kasher’s code-writing team in 2003 and 2004, but he had opposed Kasher’s version, refusing to sign the final document. In the midst of the fighting, he wrote an emotional Facebook post arguing that the vast civilian casualties resulting from the operation were the clear result of Kasher’s ethical code, which “gave moral authorization for civilian casualties.”

“There can be no justification for harming [civilians] on such a scale,” Paz wrote. “I am not talking about mistakes — those happen in combat. I’m talking about the code of ethics, its application and the serious consequences!”

Even Kasher himself believes that his version has been widely, if informally, adopted. In an interview with the Forward, Kasher told of how “Yadlin and myself presented [the 2004 code] to the IDF chief of staff, to the head of the General Security Service, and to subsequent IDF chiefs of staff.”

“From a historical perspective,” Kasher said, “in the three recent operations, I think that to a significant extent our principles were implemented by the commanders.”

In the midst of the war last summer, Kasher told Israel HaYom that he believed Israel was “fulfilling the ethical requirements” in Gaza. “The number of casualties is irrelevant,” he said. “It does not speak of omissions or any wrongdoing on the part of the IDF.” Speaking to the Forward, however, Kasher confessed the futility of any ethical code: “The issue of how you treat targets of military significance when they are in the vicinity of noncombatants is something that no list of values is going to tell you.”

Avi Sagi, academic director of the Military Ethics Research Project at the Shalom Hartman Institute, sat on the 2000 committee. As to the question of which version of the IDF’s ethical code is applied on the ground, Sagi believes it is somewhere between neither and both. His “great concern,” he told the Forward, is that “since Cast Lead, the IDF entered into an unclear space somewhere in between these two documents.” He noted how “during Protective Edge it was clear that in some circumstances there was a lack of internalized ethics.”

Things could be different, he said. “Take the ‘knock on the roof’ tactic. The usual way of doing it is to hit the target with a warning bomb, and if no one comes out, you shoot.” But this doesn’t necessarily ensure that innocents get out of the way. Sagi related the story of a commander of an armored brigade who needed to coax innocents out of a house. Instead of “knocking on the roof,” he brought huge Caterpillar tractors and began building a wall all the way around the building and waited. In the end, both the civilians and the terrorists walked out of the house with their hands on their heads. “That,” Sagi said, “is what makes a fighter an ethical fighter.”

Elisheva Goldberg is a freelance writer living in Jerusalem. She was formerly an editor and analyst at Molad: The Center for the Renewal of Israeli Democracy, and an assistant editor at Open Zion, a Daily Beast blog edited by Peter Beinart.

A previous version of this article implied that, according to the 2000 “Spirit of the IDF,” civilians were within military bounds. The text has been corrected to reflect that this is not the case.