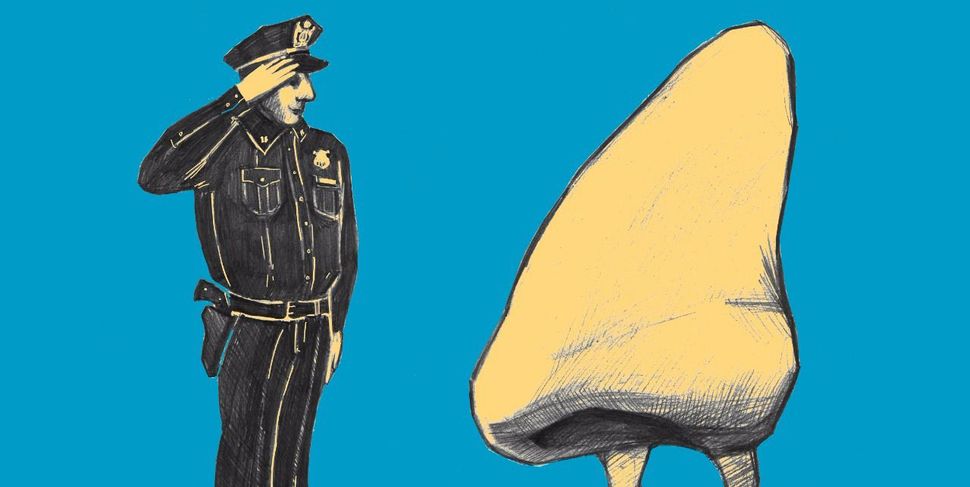 One morning in early 1982, I was driving up Route 1 toward Newark Airport, borderline late for my flight. As I wove through morning traffic, calculating how fast I could go without risking a ticket, I suddenly saw the whirling red cap of a police car in my rearview mirror.

I pulled over and waited for the inevitable summons, and indeed the officer asked for my license and registration. He went back to his partner, presumably called in to check my record, and returned to my open window. He didn’t have a ticket for me, though, only a series of questions about where I was going.

So I explained the trip to Detroit to visit my younger brother at his college, and explained my out-of-state address with the fact I had visited with my father in a nearby suburb the previous night. Far from being assuaged, the officer now had his partner take a turn inspecting my face and my credentials. He, too, asked a round of questions about my whereabouts and destination.

After the cops huddled back in their patrol car, the first one reappeared to tell me that I could go. The journalist in me could not resist asking why I’d been stopped, since I hadn’t been issued a speeding ticket. There’d been a murder in the vicinity, the officer told me, and I fit the description of the suspect. As the cop walked away, his slow steps conveying a sense of dejection at his near-miss, he muttered to himself, “The nose is identical.”

I’ve told this story often in the decades since then, mostly to have self-effacing fun with my quintessentially Jewish beak. (I even keep a novelty pencil sharpener in the shape of a nose on my desk at Columbia University.) With each recent killing of a black man by a police officer, however, I have come around to a more sober and disturbing interpretation: The Case of the Identical Nose is also the case of white privilege with the police.

The essential national debate about police brutality with black citizens — and the related discussions about the war on drugs and the “broken windows” theory of law enforcement — nonetheless addresses only half the racial equation. It weighs the reasons that police resort to arrest and violence with black suspects, and yet it assumes that police dealings with whites exist simply as a normative baseline against which abnormal practice can be measured. The academic theory of “white studies,” however, reminds us that whiteness is not a neutral midpoint but a system of many kinds of privilege.

The more I have replayed this incident in my mind against the backdrop of Eric Garner, Tamir Rice, Michael Brown and Freddie Gray, the more I have recognized that it was part of a pattern of police latitude for me. Any one of these episodes, handled more aggressively by the police, could easily have resulted in arrest or worse.

There was the afternoon in the late 1970s, for instance, when I was driving through my hometown on the way to a doctor’s appointment. I had torn my right calf muscle playing basketball two days earlier, and because my own car had a stick shift and I could not manage the clutch pedal with my injured leg, I borrowed my stepmother’s car with its automatic transmission. What I did not notice, though, was that its state inspection sticker had expired.

The police officer checking the traffic on Route 27 most definitely did notice, and he pulled me over. Worse, I recognized him as a high school classmate two years older and an order of magnitude more hostile than I was, a star wrestler and football linebacker. He informed me that my car was being impounded right away. Expecting no sympathy, I pleaded that I had a torn leg muscle and was on my way to the doctor. I was already a mile from home and I could barely walk a block. To my shocked relief, the cop let me drive the car home — no towing, not even a ticket.

Suppose, though, he had insisted on leaving me lame along the highway? What kind of argument might have broken out? What if I had cursed under my breath and he had heard? Haven’t young black men been killed after police interactions that started out as innocuously as mine?

My memory can run the list: stopped by a highway patrolman for driving with my headphones on as I left a friend’s wedding in Iowa; pulled over for rolling at low speed through a stop sign near the uptown Fairway; flagged for talking on my cellphone as I drove down West 96th Street; ordered to a halt for doing 86 in a 70 zone in northern Louisiana. Sometimes I got a ticket, sometimes not. Never was I frisked, and never was a flashlight beam aimed inside the car.

Yes, I can say that I had such prosaic experiences with the police because I’m polite and contrite and dress and talk a certain way. But I would be lying to myself if I said those were the only reasons. Every time I got an essentially free pass, I did not get a criminal record for something dubious like “resisting arrest” or “disorderly conduct” to haunt me at the next stop. Being white instead of black, I always got the benefit of the doubt, even when the nose was identical.

Samuel G. Freedman, a regular contributor to the Forward, is a journalism professor at Columbia University and the author of seven books.