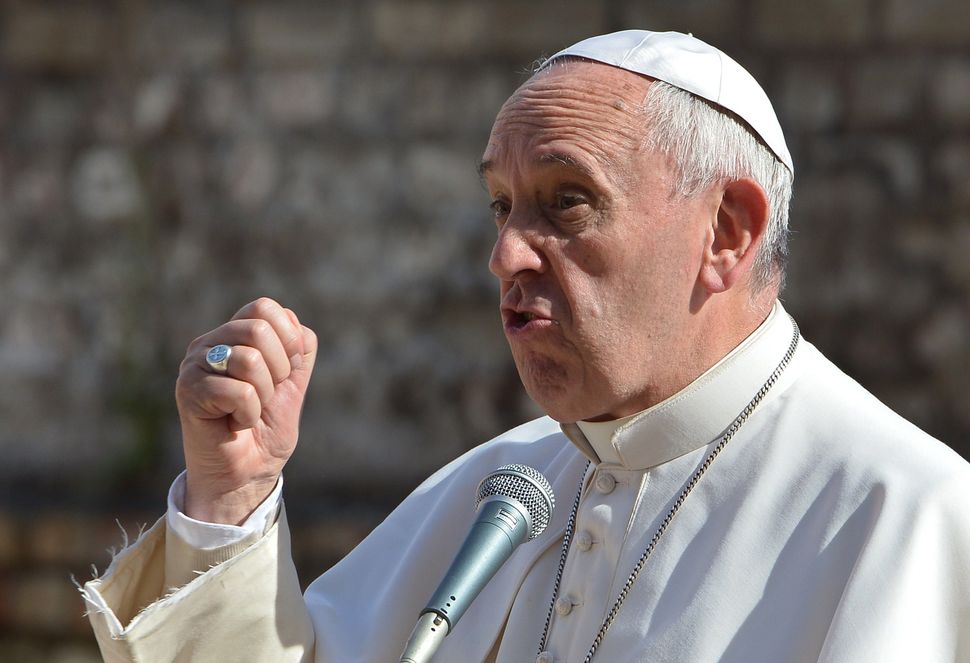 I thought I’d heard — from conservatives, if memory serves — that it’s liberals who habitually sin by substituting their own reason for the verities of faith. Especially Jewish liberals, who are all about “me, me, me,” it’s said, with never a thought for the imperatives of tradition and community. Conservatives remind us that we have obligations to a higher authority, transcending our individual inclinations.

And yet, here comes a phalanx of conservatives — Catholic conservatives no less — thundering across any number of journals and websites that the pope doesn’t know what he’s talking about. Some of the barbs come from old-line Catholic traditionalists. Others come from pundits tied to a tiny cluster of climate-denial think-tanks funded by big oil. They range from predictable to bizarre.

One critic, arch-conservative Vatican-watcher Riccardo Cascioli, warns on a popular Italian Catholic website that environmentalists are leading the church “inevitably” toward “population control.” Another, Canadian climate skeptic Tom Harris, blames it on an African cleric close to the pope. Several demand that the pope stick to discussing things he knows about, presumably including obstetrics and gynecology.

Running through the criticism is the fear that tackling climate change will retard growth, hurting the poor who should be the pope’s main concern. This might seem odd, given that most of the critics are devout free-marketeers who spend the rest of their time denying poverty is a problem that needs fixing, but still.

Behind the brouhaha is an upcoming papal encyclical, the most authoritative form of Catholic teaching. Reportedly set for release in June, it will warn of the threat climate change poses to human society and nature and urge steps to slow its advance and soften its impact. The exact content is being kept secret, but reports from the Vatican say it addresses the climate crisis for the first time as a worldwide moral imperative.

An 11-page summary, authored by a star-studded team of a dozen top scientists, economists and theologians from four continents, was released by the Vatican April 29. It tightly summarizes climate change science along with its history, predicted trajectory and economic effects. Most vulnerable to the disruption, it warns, will be the world’s poorest, who’ve contributed the least to the problem. Recommended steps range from cutting carbon emissions and slowing deforestation to changing consumption habits, “empowerment of women and children” and “a reallocation of the benefits and burdens that accompany humanity’s activities both within nations and between nations.” That is, redistribution. Shudder, ye conservatives.

On April 28, as part of the buildup to the encyclical, the Vatican convened an international conference of some 150 scientists and “spiritual leaders” representing a dozen faiths. The pope didn’t attend, but United Nations Secretary-General Ban Ki-moon addressed the gathering. So did Columbia University economist and global poverty maven Jeffrey Sachs, the most prominent Jew on the Vatican’s climate team. Or, as the right-wing Breitbart.com described him, “known abortion advocate Jeffrey Sachs.”

Running simultaneously was a teach-in organized by several American climate denial think tanks. They came to Rome, organizers said, “to inform Pope Francis of the truth about climate science: There is no global warming crisis!”

The high volume of denier alarm is a fair reflection of the encyclical’s unusual context. Unlike most papal teachings, it’s timed to influence a specific political event: the 21st annual U.N. climate summit, scheduled for December in Paris. The summit is supposed to vote on a raft of binding measures requiring action by individual nations. Past summits have been windy failures, but this time might be different, thanks to the U.S.-China climate agreement reached in November. Advocates are cautiously hopeful. Skeptics are scared stiff.

Preparing for Paris, the pope will address a global summit on sustainable development at the U.N. in September. He’s also been invited to address Congress by House Speaker John Boehner, a Catholic who’s being described in some circles as “out of his mind” for letting the liberal pontiff pitch his climate message to the GOP-led body.

Who’ll be listening? The House has 137 Catholic members, 31% of the total, the largest single religious group in the chamber, including 69 Republicans and 68 Democrats, according to the Pew Research Center. House Republicans almost unanimously dismiss climate change as a problem that’s caused by humans and needs fixing.

Just six years ago, Democrats outnumbered Republicans 98 to 37 among House Catholics. Something is changing, and it’s not just at the ballot box.

Congress isn’t the pope’s only tough audience. American Catholics overall, the nation’s largest religious denomination at 24% of the population, are sharply divided between 30 million Hispanic Catholics who register high levels of concern over climate change and 48 million white Catholics who mostly don’t. According to a survey on climate attitudes conducted last November by the Public Religion Research Institute, 73% of Hispanic Catholics say they believe climate change is a “crisis” or “serious problem” and the same 73% are “very” (43%) or “somewhat” concerned. Among white Catholics, 53% believe it’s a problem, but just 41% say they’re concerned (17% “very”) about it.

Of the major religious groups polled, only the 57 million white Evangelical Protestants showed less concern: 44% called it a crisis or major problem and 35% said they’re “very” (18%) or “somewhat” concerned. Concern among white Mainline Protestants, 45 million strong, was only slightly higher than among Catholics.

Democrats were about twice as likely as Republicans to say climate change is a serious problem and — even more significant — that it’s likely to harm them personally. In fact, looking closely at the survey’s full report, it’s apparent that concern about climate change is dependent on four separate but related factors: religion, race, party affiliation and affluence.