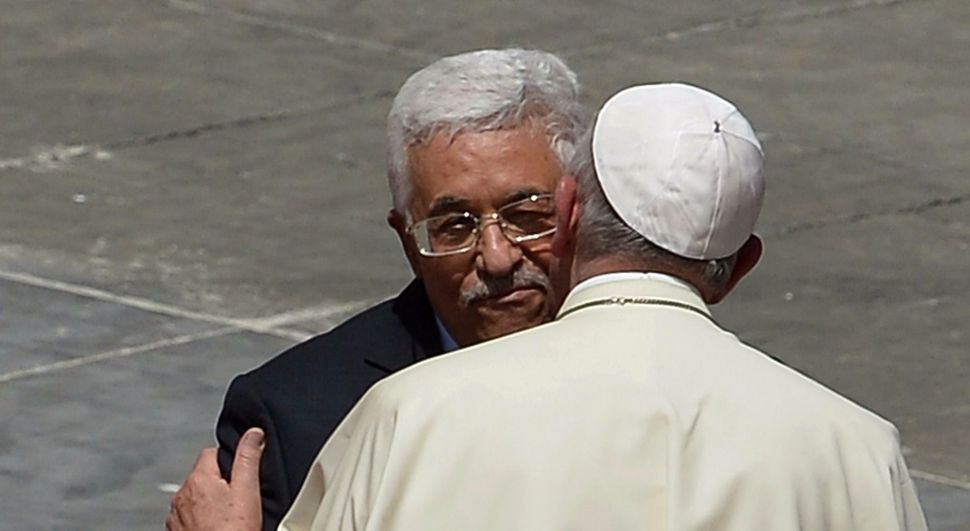 Last week, the Vatican edged close to formal recognition of a Palestinian state, finalizing a treaty in which for the first time, the Holy See makes explicit reference to a “state of Palestine.”

Israel’s Foreign Ministry, while voicing disappointment at the move, was unusually circumspect in its initial response, stating that the use of the term Palestinian state “does not advance the peace process.”

Considerably less restrained was a lead columnist for U.S. billionaire Sheldon Adelson’s Israel Hayom newspaper, Dror Eydar, who has doubled as a well-paid speechwriter and adviser on Christian affairs for the Prime Minister’s Office.

In a Sunday column headlined “An open letter to Pope Francis,” Eydar signals that in signing a treaty with what the columnist calls an “Arab-Palestinian state,” the Vatican has made a “pathetic decision” which is lending aid to “the latest attempt to nail the entire Jewish people to the cross.”

Forgoing the respectful form of address which Benjamin Netanyahu himself used in welcoming Pope Francis (“Hod K’dushat’cha” – Your Holiness) to Israel last year, Eydar’s “Open letter to Pope Francis” makes clear to Hebrew readers of the paper, exactly where the Pontiff and the Catholic Church as a whole, should stand in their estimation.

“Adoni Ha’Afifyor” [“Mr. Pope”], you are hostages to Islam, and, like many others in the West, think that if you just sacrifice the Jews, it [Islam] will leave you alone.”

“Generation after generation, you blamed us for the crucifixion and death of your savior and forced us to feel his pain. What was anti-Semitism if not a forced return to the cross? A single Jew was crucified in Jerusalem at the start of the first millennium, and for the 2,000 years since, an entire people has been crucified all over the world.”

At this point, Eydar implicates the Palestinian people, and, by extension, the Pope, in a mirror-image version of one of history’s more ancient libels:

“Mr. Pope, establishing a Palestinian state on the Samarian hills [the West Bank] in the heart of the historic Land of Israel, is the latest attempt to nail the entire Jewish people to the cross.”

He concludes with a warning to Pope Francis and the Church about the treatment he says Christians in Muslim-ruled lands can continue to expect, whether or not the Jews as a people are crucified or otherwise annihilated by the Islamic caliphate which Eydar maintains will immediately occupy the West Bank if Israel agrees to compromise with the Palestinians.

According to Eydar, “deep in your hearts you know that peace won’t be any closer as a result of this pathetic decision, and Christians will go on being murdered, raped, and forcibly converted to Islam. Your decision [the Vatican-Palestinian treaty] will pave the way for the disgrace.”

For the moment, let’s put aside a question or two, including the issue of how Catholics in the United States – a principal electoral target group of Adelson and Israel Hayom’s beloved Republican Party – are likely to react to scathing criticism of the Pope and the Catholic Church by the likes of Eydar and

GOP congressmen such as Jeff Duncan [R-S.C.] (“It’s interesting how the Vatican has gotten so political when ultimately the Vatican ought to be working to lead people to Jesus Christ and salvation, and that’s what the Church is supposed to do,” Politico quoted Duncan as saying last week.)

For now, just one question for Dr. Eydar, who holds a PhD in Hebrew literature, and is, in the words of Israel Hayom, “an expert in Jewish thought.” In your quest to prove to Pope Francis that the Holy Land in its entirety belongs solely to the Jews, you write:

“If we were to go back 2,000 years to the time of the Roman rule and ask Jesus to whom this country belongs, he would simply refer us to the verses of promise in the Bible, such as God’s promise to Abraham, the greatest believer: ‘For all the land that you see I will give to you and to your offspring forever” (Genesis 13:16).’”

After all, you continue, “From the time we were exiled and lost our independence, this land was desolate and never became another self-determined state. The country was waiting for its true children, and our return to the land fulfilled the biblical prophecy.”

Leaving aside the dubious decription of the desolation of the land, are you not saying that the land belongs to all of the offspring of Abraham?