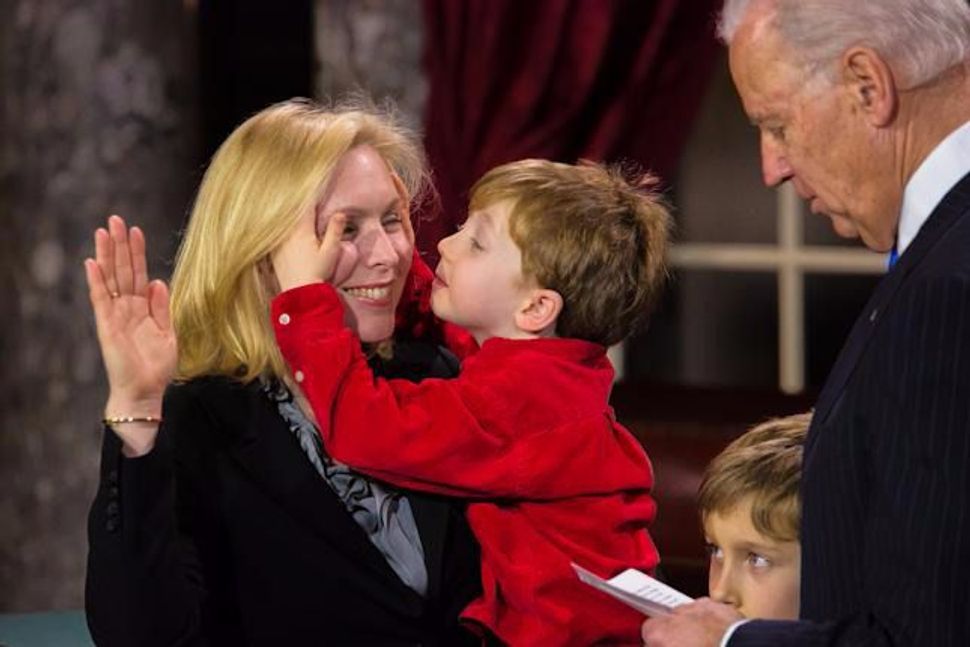 I remember the first time I was confronted with an employee’s request for maternity leave. I was in charge of the features department of The Philadelphia Inquirer, and a talented reporter told me she was pregnant and planned on taking leave for several months. On the outside, I expressed the appropriate joy and congratulations. On the inside, I screamed: WHAT?? You can’t leave for that long!! How will I manage without you?

The fact that I had done the same thing, three times, to a series of editors was forgotten in that moment. All I could imagine was an empty desk and the terror of not knowing whether its occupant would ever fill it again.

I relate this story because, as the campaign for paid family leave is picking up adherents in Washington and finally showing some real success among Jewish not-for-profits, I want you to know that I get it. I know what it’s like to ask others to work extra hard to compensate for an absent employee. I know what it’s like to have that awkward conversation with the new mom who has decided reluctantly to stay home and not return to work, after you’ve kept her job open for months.

These are the adjustments the modern workplace is forced to make to accommodate the new reality of working families. They introduce disruption and uncertainty, sometimes at a price, and interfere with the American imperative to work, work, work while expecting that family life will just take care of itself.

All that said, there is no doubt in my mind that paid family leave is an absolute necessity, not only because it is the right thing to do, but also because it demonstrably improves the workplace without harming the bottom line. To that end, Congress should pass the Family and Medical Insurance Leave Act without delay. Every Jewish not-for-profit should sign onto the standards promoted by Advancing Women Professionals in its Better Work Better Life campaign. The United States economy finally must move into the 21st century or be left further behind on the global stage.

I’ve listened to the critics and hesitators, and with all due respect, they don’t know what they are talking about. They sound like the doomsayers back in 1993, when the Family and Medical Leave Act was enacted, who predicted that granting some workers the right to take unpaid leave would destroy the American economy. (It hasn’t.) Mandating paid leave, Jack Mozloom, who runs communications for the National Federation of Independent Business told me, “ultimately hurts businesses, workers and the economy. It’s a mistake.”

He’s the one who’s mistaken. There’s empirical evidence to the contrary: California has conducted a real-life experiment for more than a decade, with a law establishing an insurance fund that grants partial pay for six weeks. One study shows that between 89% and 99% of employers say it has had either no effect or a positive one on productivity, profitability, turnover and morale. Meantime, there and in New Jersey and Rhode Island — the other states with paid leave programs — more people take time off to care for newborns and family members, true, but they are more likely to return to work (reducing turnover costs), work harder when they do and earn more in the future.

Most crucially, these programs are shown to reduce disparities in leave-taking between high and low socioeconomic groups. Low-income parents are seen to benefit the most — in New Jersey, one study showed that in the year after giving birth, women who take paid leave have been about 40% less likely to receive public assistance or food stamps.

Mozloom’s solution is to let businesses create their own policies, except that they don’t. Only 12% of private sector workers are covered by formal paid leave policies. That is why the dreaded “government mandate” is required here. As John Oliver so brilliantly put it on Mother’s Day: “You can’t have it both ways. You can’t go on and on about how much you love mothers and then fail to support legislation that makes life easier for them.”

President Obama has already extended paid leave to federal workers. The FAMILY Act sponsored by Sen. Kirsten Gillibrand and Rep. Rosa DeLauro would create an insurance program funded by employee and employer donations, much like Social Security, to provide partial salaries for up to 12 weeks, capped at $1,000 a week. It’s a system with negligible costs and enormous civic rewards. So of course, it remains a tantalizing long-shot.

Meanwhile, the sexy companies that seem to own the future are racing ahead to offer more family benefits, rightly sensing that it’s the only way to attract and retain talented employees. The Jewish world has finally begun to notice.

AWP’s Shifra Bronznick began her campaign back in 2009 to persuade 100 Jewish organizations to adopt “healthy work life policies,” including formal paid leave for a minimum of four weeks. Ninety-seven have made the list so far, the latest being Hillel International, which earlier in May announced a policy that covers about 650 full-time professionals with at least one year of service. (The Forward offers 12 weeks parental leave, with four weeks paid, to those who have been here a year.)

A recent convert to the cause, the Jewish Federations of North America, studied its experience and found that “the benefits far and away outweighed the costs,” Jerry Silverman, president and CEO, wrote to federation executives.

Still, notable names are not on AWP’s list — for instance, the American Jewish Committee and most of the nation’s large rabbinic seminaries.(The Anti-Defamation League is not on AWP’s list but its spokesman assured me that it has a paid leave policy that meets the standards.) What are the others waiting for?

Paid family leave is a moral obligation, an economic benefit, a social equalizer and the best way to retain talent. The reporter I mentioned who took leave all those years ago? She returned to the paper and has done amazing work — and won a Pulitzer Prize last year. Point proved.