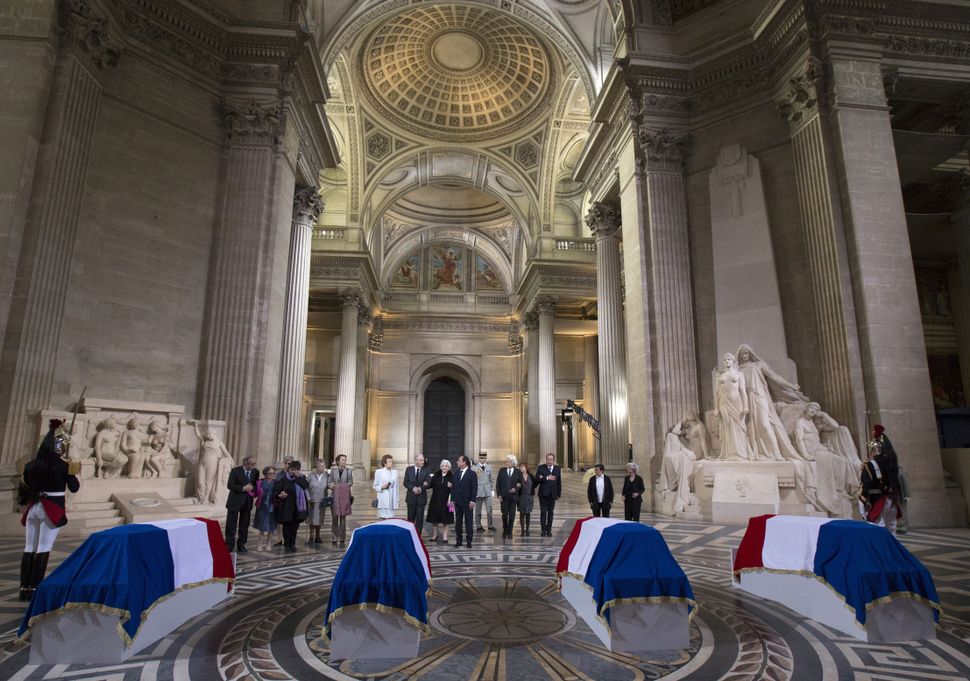 One could hardly conceive of a greater contrast between the resorts and runways at Cannes and the sepulchers and silence at the Pantheon. The Mediterranean town is the capital of glitter and celebrity, while the Parisian monument is the twilit-resting place for those whose lives brought glory to the nation.

This year, however, the red carpet at Cannes ran directly to the Pantheon, where the festival’s creator, Jean Zay, was taking up residence. On Wednesday, just days after the end of the festival, a far more sober celebration took place. With great pomp and circumstance on the esplanade of this neo-classical pile overlooking Paris, the remains of four individuals were carried to the Pantheon. In the company of Voltaire and Rousseau, Victor Hugo and Jean Moulin, Zay was laid to rest in its crypt along with Germaine Tillion, Geneviève de Gaulle-Anthonioz, and Pierre Brossolette.

The media have largely focused on Tillion and de Gaulle-Anthonioz, and deservedly so. These women were early recruits to the Resistance in occupied France and they survived imprisonment in the German concentration camp of Ravensbruck to continue their work of social solidarity and moral witnessing in postwar France. No less significant, by joining Marie Curie, they now triple the number of women residing in the Pantheon. The celebrated apostrophe engraved over the monument’s entrance must now be tweaked: “Aux grandes hommes et femmes, une patrie reconnaissant.”

Unfortunately, the lights shone on Tillion and de Gaulle-Anthonioz have cast Zay into the shadows. This is a pity, for he was equally remarkable. Along with his many accomplishments—least of which is the creation of the Cannes film festival—there is also the memory of his personal courage and moral constancy during one of France’s most turbulent and terrifying eras.

Born in Orleans nearly five hundred years after Joan of Arc retook the city, this son of a Jewish father and Protestant mother became, at the age of 27, the youngest member elected to the National Assembly. The 1930s were, as the historian Eugen Weber observed, the “hollow years.” During this decade France was crippled by ideological extremism and political paralysis, economic decline and social disarray, governmental instability and geopolitical threats. It was a time, in short, when as Yeats would have it, the best lacked all conviction, while the worst were full of passionate intensity.

Yet Zay was an exception: he was among the best and never lacked for conviction. Between 1936 and 1939 he served in several governments, including Léon Blum’s Popular Front government, as Minister of National Education and Fine Arts. Molded by his father, the editor of Orleans’ Socialist newspaper, and his mother, a public school teacher, Zay seemed fated for this ministerial position. Perhaps “fate” would have been too great a word for this most humane and humanistic of individuals. But whether or not fate played a role, Zay’s actions as minister deeply influenced the way in which France educated its youth and cultivated its arts.

Upon taking office, Zay acted upon his republican belief that the public schools were the great workshop for the shaping of citizens. He democratized France’s education system, bringing the socially and economically marginalized into its folds by increasing the period of required schooling from 13 to 14 years, creating a legion of “bibliobuses” or library buses that brought their wares to working class and immigrant neighborhoods, and launching experimental classes in hundreds of schools in the effort to renew pedagogical and curricular approaches in a system that had become sclerotic and class-bound. He also prohibited the wearing of religious symbols or clothing in the schools—a law no less controversial today than it was more than 75 years ago.

Perhaps the most dramatic change introduced by Zay was mandatory physical education classes. For those of us raised in an era where those who can, do; those who can’t, teach; and those who can’t teach, teach gym, this might not seem like much. But in interwar France, it was revolutionary. The perception, if not reality of moral and physical decadence had long been a concern in republican France; with the rise of Nazism and Fascism, it quickly became an obsession. Working with his ministerial colleague Léo Lagrange, Zay decreed that three hours every week in the school curriculum be devoted to sport and exercise. Though the lack of material and financial means forced them to compromise, Zay and Lagrange did succeed in building hundreds of swimming pools, soccer fields, and bicycle tracks across the country.

The specter cast by Nazi Germany also led Zay to create the Cannes Film Festival. During the interwar period, Italy was home to the greatest of film festivals, La Mostra de Venise. When Jean Renoir’s “The Grand Illusion” won the festival’s top prize in 1937, Hitler was incensed: not only was the film French, but it was also pacifist. The following year, as a result, Hitler conspired with Mussolini to guarantee that Leni Riefenstahl’s “Olympia” receive top honors. The film buff as much as the French patriot in Zay rebelled at the news. Outraged by the Nazi diktat, Zay set out to create a counter festival the following year in Cannes. As fate, or Hitler, would have it, the opening date for the festival was September 1: the same day that Nazi Germany invaded Poland. Two days later, France and Great Britain declared war on Germany.

One of the first casualties of the war was the festival; one of its last casualties was Jean Zay. Having cancelled the festival when he heard the news of the German invasion, Zay then quit his ministerial post and enlisted in the army. It was with the army that he served until the summer of 1940. Upon learning that the French government under Philippe Pétain and Pierre Laval was suing for peace, Zay joined a group of several dozen socialist parliamentarians, including Pierre Mendès-France, aboard the passenger ship Massila to continue the war in North Africa. But Vichy officials boarded the ship, arrested the men, and subjected them to the show trials at Riom. Zay was imprisoned and, just weeks before France’s liberation, was murdered in his cell by the French fascist militia.

Zay was reviled during his life by the extreme right in France. The novelist Louis Ferdinand Céline believed the Sorbonne had been “turned into a ghetto by the Jew Zay,” while Charles Maurras, founder of Action Française, described Zay as one of the “vermin crawling over the body of France.” It is shocking, if not surprising, that this language is still spoken in France. The anti-Semitic paper Rivarol, which is close to Jean-Marie Le Pen, the former leader of the Front National, has denounced Zay’s election to the Panthéon, while Egalité et Reconciliation, the movement led by the Holocaust denier Alain Soral, lambastes the ceremony as an “insult to France.”

Perhaps this, too, is a fate peculiar to French Jews: the more they display their Frenchness, the less French they become, at least in the eyes of a certain kind of nationalist. Zay, of course, was a very different kind of nationalist — the very sort he wished to form in the nation’s schools. Especially now that this ideal seems besieged, it is fitting that France has chosen to honor this great man’s life.