The 95% Doctrine of Climate Change 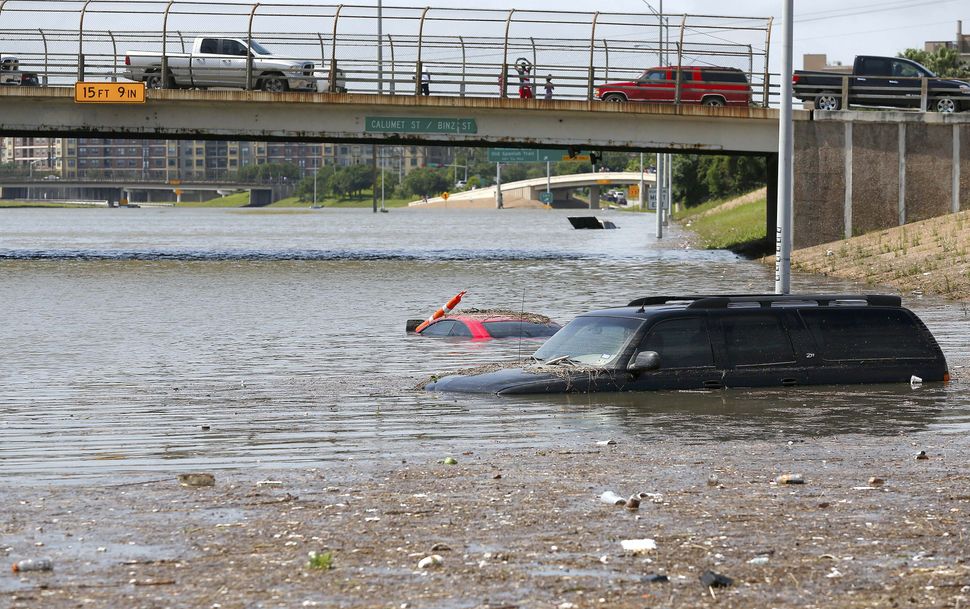 In November 2001, faced with unconfirmed reports that Pakistani scientists might be helping Al Qaeda get a nuclear weapon, Vice President Dick Cheney articulated what became known as the Cheney Doctrine: If there’s even a 1% chance that the unimaginable might happen, it must be treated as a certainty and acted on accordingly.

“It’s not about our analysis, or finding a preponderance of evidence — it’s about our response,” Cheney told a meeting of top aides, according to the best-selling 2006 book “The One Percent Doctrine” by Pulitzer Prize-winning reporter Ron Suskind.

The doctrine became a cornerstone of American foreign policy during the Bush administration’s war on terror. Its abandonment by the Obama administration in favor of evidence-based diplomacy has been a cardinal Republican complaint.

Given that history, you might think Republicans would take a 95% chance of catastrophe as a call to action. But you’d be wrong.

Consider Texas and Oklahoma, two of our reddest states. They’ve just emerged from a five-year drought, the worst in the two states’ history, going back at least to the Middle Ages. Drought gave way in the space of three weeks in April to the worst flooding in the two states’ history. Biblical-scale rainfall made rivers rise as much as 40 feet in three hours in some parts, overflowing their banks and causing flashfloods of “relentless, tsunami-like power” in the words of Texas Governor Greg Abbott. In the hill country of central Texas, just south of Austin, the state capital, the Blanco River swept away at least 350 houses, along with several entire families.

The results: a constant series of unprecedented, record-setting weather events across the country, from monster blizzards in Boston and Buffalo to drought in California and flooding in Texas and Oklahoma. Rising sea levels claiming coastal communities in Maryland, regularly flood streets in Miami and back up sewage systems in coastal cities everywhere. Crop failures due to drought in Russia and flooding in Australia spell food shortages and unrest in Africa and the Middle East. Scientists expected all this to happen by the middle or end of this century. It’s happening now.

Scientists are also beginning to understand the impact of the planet’s warming on more complex weather events. Like tornadoes. They’re coming less frequently but in greater clusters, larger sizes and increased ferocity. The biggest tornado ever recorded, 2.6 miles wide with winds up to 302 miles per hour, landed just two years ago, on May 31, 2013, in El Reno, Oklahoma. Most tornadoes measure about 250 feet with winds up to 110 mph.

Oklahoma is the home of Senator James Inhofe, chairman of Senate’s committee on Environment and Public Works, famed for declaring in a 2003 speech that “manmade” global warming “is looking like” the “greatest hoax ever perpetrated on the American people.” This past February 26 he brought a snowball onto the Senate floor to prove the earth wasn’t getting warmer. That was three months before his state’s catastrophic drought suddenly gave way to catastrophic floods.

Texas is home to Representative Lamar Smith, chairman of the House committee on Science, Space and Technology. It voted April 30 to cut $323 million or some 20% from the budget of NASA’s Earth Science Division. That’s the budget for NASA satellites that track climate change by observing storms, cloud patterns, glaciers, ocean surfaces and more. The vote came three weeks before the floods, which coincidentally did their worst damage right in Smith’s own district, along the swollen Blanco River in the hill country.

Smith and Inhofe are among the most influential figures in the Republican campaign to deny climate change. Smith made one of the right’s most high-profile recent denial arguments April 23 on the influential Wall Street Journal op-ed page, arguing that climate change was a “religion” rooted in bad science, concocted by the Obama administration and the United Nations with the goal of “redistribution of wealth among nations.” He cited a handful of factoids popular among climate deniers, notably the debated claim that global temperature rise has been in “hiatus” since the 1990s. Not surprisingly, he ignored mountains of scientific research demonstrating to a near certainty that while questions remain, the crisis is real.

Smith and Inhofe aren’t alone. Florida, perhaps the state most vulnerable to climate change, was found by investigative reporters to have an unwritten but strict policy barring the state’s Department of Environmental Protection from mentioning “climate change,” “global warming” or even “sea-level rise” in any official communications. The rule was instituted after Republican Governor Rick Scott took office in 2011.

North Carolina actually passed a law in 2012 barring state agencies from considering likely sea-level rise in formulating coastline development policies. The law was reportedly prompted by a prediction from the state’s Coastal Resources Commission that the sea level opposite North Carolina would rise 39 inches in the coming century, threatening real estate values.

A few states, including Tennessee and Louisiana, have inserted climate skepticism into their public school science curricula, alongside evolution. This reflects a common view on the religious right that global warming exaggerates the human role in shaping God’s world. As Inhofe put it in a 2012 interview on a Christian radio station, “God’s still up there. The arrogance of people to think that we human beings would be able to change what He is doing in the climate is to me outrageous.”

In fact, if there’s any arrogance at work, it’s among Republicans and conservatives who ignore a half-century of research by tens of thousands of scientists around the world, demonstrating that the climate is changing in ways that will prove catastrophic if not addressed in the next few years.

Even if global carbon emissions were stopped dead tomorrow, sea level rise and changing climate conditions would continue for several centuries. They’re already forcing hugely expensive investments to repair damage and retrofit infrastructure for the changes we can’t avoid. If emissions aren’t stopped, the earth will become far more inhospitable, if not uninhabitable, within the next few centuries. The U.N. reports, which merely summarize the existing research, now put the likelihood at 95%. As Dick Cheney once said, the issue is not longer the evidence, but our response.

The 95% Doctrine of Climate Change