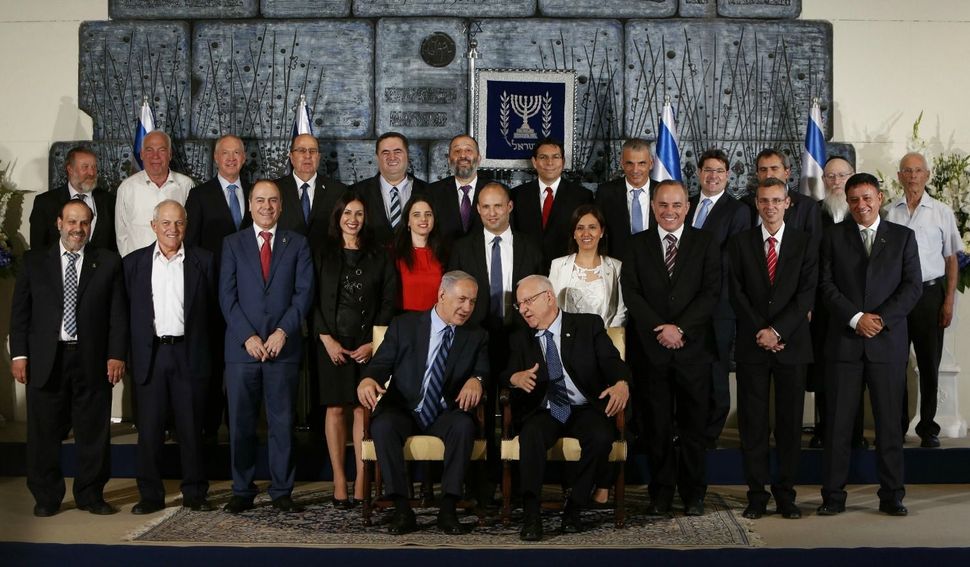 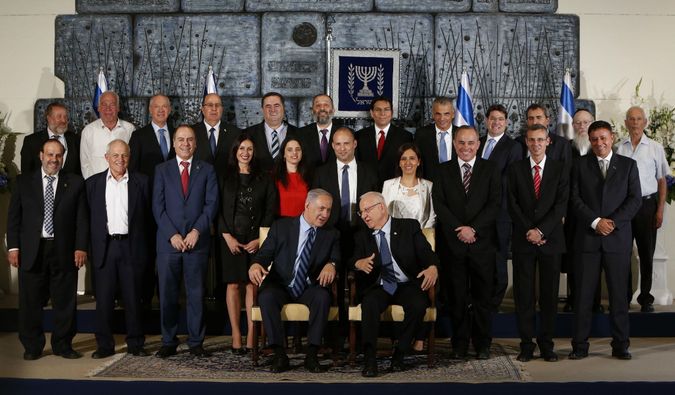 Two weeks after his new cabinet was formally sworn in, Israel’s Prime Minister Benjamin Netanyahu is still juggling cabinet assignments as he struggles with the Rubik’s Cube of his fourth governing coalition.

Newly appointed ministers have been furiously jockeying for position and influence, forcing the prime minister to carve up existing ministries and move sub-bureaus and bits of turf from one office to another. Each reassignment soothes one minister’s ego but wounds another’s, forcing yet another round of transfers, and so on. What’s emerging is a government in which responsibilities overlap and duplicate one another, lines of authority are dauntingly unclear and the one thing that’s certain is the ability of individual ministers to blackmail the prime minister.

What’s worse, the most extreme mixing-and-matching is taking place in the critically important arenas of foreign affairs and defense. No fewer than six ministers and a deputy minister are in charge of various overlapping aspects of Israel’s foreign policy. According to Walla News diplomatic correspondent Amir Tibon, foreign diplomats are watching the events “with a mixture of shock and amusement.” As comically baroque as the spectacle is, they say, they’re troubled that they don’t know who they’re supposed to talk to about sensitive issues such as Iran and attempted boycotts.

The main problem is that during the six weeks of formal coalition negotiating after the election, Netanyahu was forced to give away some of the most prestigious cabinet posts to smaller parties in order to woo them into the government. Only at the last minute did he assign the leftovers to leaders of his own Likud party. Many of the Likudniks had assumed they’d get plum jobs, since their party won the election. More than a few had been waiting years to move up. Some had actually been promised promotions by Netanyahu before the election.

Instead, they ended up with such demeaning portfolios as sports and culture, police, immigrant absorption, and water-and-electricity. (Some of these have inflated names, like Internal Security for police and National Infrastructures for water/electric, but nobody’s fooled.) These ministries are essential to the functioning of a good government, but they don’t carry the heroic aura of gravitas that comes with defense and foreign affairs — not to mention the foreign travel, nor the resume gloss that leads to higher office.

To soothe the wounded egos, the prime minister has spent the last two weeks carving up and pasting together ministerial positions. The result looks like something out of a Gilbert and Sullivan operetta. No, they don’t have the Mikado’s minister of flirting or Lord High Everything Else, but it’s close. To name a few: Yisrael Katz, minister of Transportation and Intelligence Affairs; Gilad Erdan, minister of Internal Security, Strategic Affairs, Public Diplomacy and the Battle Against Anti-Israel Boycotts; Silvan Shalom, Vice-Premier, minister of Interior (that is, local government and population registry) and manager of Israel’s Dialogue with Washington and Negotiations with the Palestinians; Yuval Steinitz, minister of National Infrastructures and interim manager of the Fight against the Iranian Nuclear Threat; Ze’ev Elkin, minister of Immigrant Absorption, Jerusalem Affairs and relations with the Jews of the former Soviet Union.

This leaves foreign diplomats in a pickle. If you are, say, the French ambassador and you need to discuss the strategic implications of some new intelligence information about Iran’s role in the boycott movement, who do you talk to? The minister of intelligence? Strategic affairs? Manager of the struggle against Iran? Against the boycott? Or do you chuck it all and go straight to the foreign minister?

Actually, that would be a problem. Netanyahu has left the foreign minister’s chair empty, reputedly hoping to use it to lure Labor Party leader Yitzhak Herzog into the government. He’s made it clear since the swearing-in that he’d like to expand the coalition, both to beef up his razor-thin 61-seat majority and to moderate his government’s extremist image in Washington and the West.

Bringing in Herzog is looking extremely unlikely, though, as Herzog has been thundering against the new government for weeks and publicly vowing to stay out. Netanyahu tried out a Plan B and met with his former cabinet ally Yair Lapid on Monday night, reportedly to offer him the foreign minister’s post. But Lapid turned him down, complaining that the prime minister’s coalition concessions to the ultra-Orthodox parties amounted to a “fire sale.”

In the meantime, Netanyahu is formally holding the foreign minister’s portfolio, and day-to-day running of the ministry is left to the new deputy minister, Tzipi Hotevely, a hard-right religious nationalist who’s associated with the Likud’s Young Turks group along with junior ministers Ze’ev Elkin, Yariv Levin and Ophir Akunis. Hotevely has made it plain that she regards herself as fully in command of foreign affairs, despite her deputy status and the doling out of various key desks to other ministers. She kicked off her new tenure by informing the Israeli diplomatic corps in a May 21 speech that it was time to be “right and not just smart” and to tell the world that the entire Land of Israel belongs to Israel by divine promise. On the other hand, she did indicate flexibility by announcing several days earlier that despite religious rules on female modesty, she would be willing to shake hands with foreign leaders in the interests of protocol.

Much of the chaos is settling down, but some is still unsettled. Erdan, who placed first (after Netanyahu) in the last Likud primaries, initially refused to join the cabinet when he wasn’t made foreign minister. Netanyahu talked him in by offering him the mostly fictional strategic affairs portfolio. But that had been promised to Elkin, one of the party’s rising stars. As compensation, Elkin was given the Jerusalem affairs portfolio. Now Netanyahu has a fight on his hands with Jerusalem Mayor Nir Barkat, to whom he’d promised that there wouldn’t be a minister of Jerusalem affairs so city wouldn’t have an over-ambitious national politician meddling in its business. No telling where that will come out. Netanyahu met with Barkat earlier this week to calm the waters, but reports are that Barkat left the meeting steaming and noticeably unsoothed.

Moreover, Erdan has been promised that in two months the Iran portfolio will be transferred to him from Steinitz, a faithful Netanyahu loyalist who’s been slapped around more often than most, but may have reached his limit.

The reasons for the mess are complex. Start with the fact that while Netanyahu won a clear personal victory in the March 17 election, winning the biggest chunk of the popular vote — 25% — for his Likud party, the combined strength of parties on the right, including the Likud and its putative satellites, declined from just over half the 120-member Knesset to less than half.

In trying to negotiate a new center-right coalition, his first priority was to bring back the ultra-Orthodox Haredi parties that had been left out of his last government. Their main demand was rollback of the secularist initiatives enacted in the last term, principally restoring large-family welfare subsidies and drafting of yeshiva students. Those concessions drove his closest ally, the fiercely secular ex-foreign minister Avigdor Lieberman, to bolt the coalition with the six seats of his Yisrael Beiteinu party and join the opposition.

Lieberman’s defection left Netanyahu with narrow coalition holding a bare majority of just 61 seats out of 120. This means any one of those 61 coalition lawmakers can bring down the government at will if they’re unhappy. And many of them are unhappy. Very unhappy.