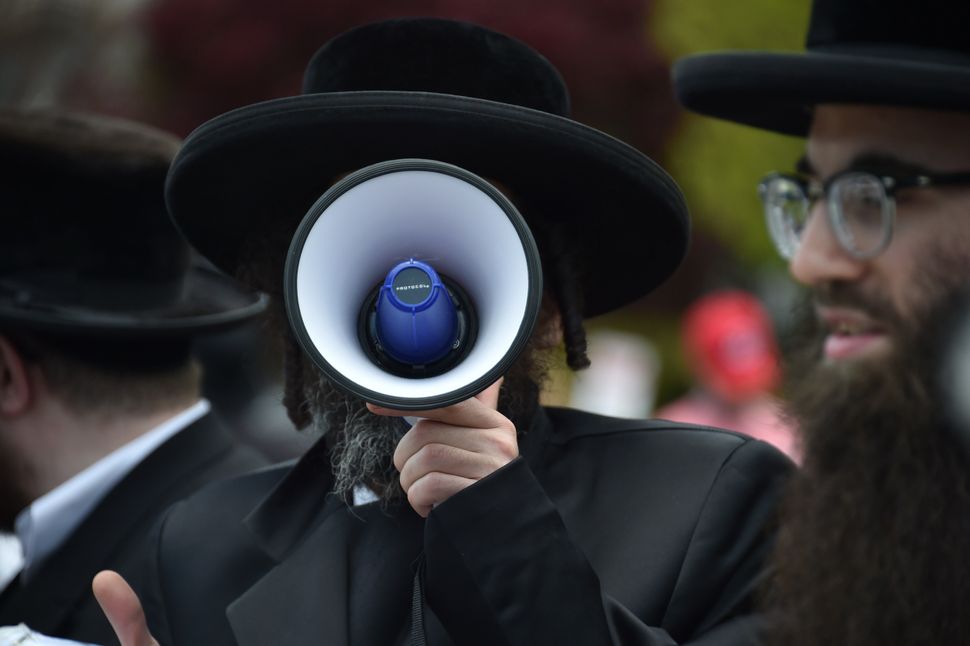 There’s a Hasidic man arguing with the gate agent at the Phoenix airport.

He’s claiming that he can’t be seated next to a woman because of his religion – even though Hasidic men have sat next to women on airplanes and buses and in shared taxis for decades, until they gained enough political power in Israel to try to segregate buses and seating on El Al.

I don’t know whether this particular man is aware of the historical irony of his situation: that he is claiming to embody an ancient tradition, whereas in fact the circumstances of his argument are products of very recent political machinations.

Either way, he is giving the gate agent a hard time. She switches his seat at least twice on the sold-out US Airways flight, managing to convince other passengers to move in order to accommodate his religious beliefs. Of course, none of them knows that his religious beliefs are so recent or so malleable. To them, perhaps, he looks like Tevye the Milkman. Another recent creation, of course – by a secular Jewish author, secular Jewish playwrights and secular-Jewish-owned mass media companies.

The Hasid’s obstinacy is also empowered by the new right-wing effort to win ever more exemptions from civil rights laws, in the name of religious liberty. Religious liberty used to mean, roughly, “Live and let live.” Now, it is said to mean, “I don’t have to obey your rules.”

Which suits the Hasid just fine. Most likely, he has learned in religious schools – paid for mainly by government largesse, thanks to “faith-based initiatives” and the erosion of the garden wall between church and state – that goyim have no souls, or are like animals, or worse.

Indeed, this entire episode would never have happened were it not for these circumstances: Haredi power in Israel, conservative politics in America, Hasidic ideology regarding non-Jews. Add to that, of course, the massive subsidies that the Jewish institutional world provides to Jewish fundamentalists: welfare that enables the community to grow more and more insular and less self-sufficient, that cements the power of the rabbinic elite.

In fact, the argument at the gate is an entirely contingent and avoidable phenomenon. This isn’t a clash of cultures, it’s an epiphenomenon of foolish policies.

Tell me: Is there another minority group in the world that pays those who are destroying it? In 30 years, New York’s Jewish community will be smaller, more ethnocentric and, above all, more Haredi. And it will, in part, have its own policies to blame. Having driven away progressives (thanks to its Israel neurosis) and multifaith families, it will be left with the remains. The she’erit yisrael – the remainder of Israel. Which will look a lot like the man at the counter.

We board the plane. Whatever accommodations the Hasidic man received seem not to have been enough, because he is soon standing at the back of the plane. Travelers to Israel are familiar with this behavior. Taught that the customs of the goyim – that includes non-Orthodox Jews, of course – are filthy, stupid and nonbinding, Haredim are unruly passengers on airplanes. “Fasten seatbelts?” – goyishe toireh. “Don’t gather in the aisles?” – narishkeit.

This man is no exception. Several times he is told to sit down, and he does, — for a moment. Then he stands up again. After the flight attendants serve drinks and snacks, we hit some light turbulence over the Midwest. Still standing up. A male flight attendant firmly instructs him to sit. He sits. Up and down, like a Jewish game of whack-a-mole.

This, too, is born of policies. In former days, it was understood that the laws of the secular government were binding upon Jews. That presumably includes the regulations of the Federal Aviation Administration. But the right has grown more brazen these days.

More brazen – and more fundamentalist. The Haredization of Orthodoxy – the Hasidim and yeshivish moving further to the right, Modern Orthodoxy splitting between “open” reformers and hardening traditionalists – has consequences everywhere. Education has become narrower. Strictures have become stricter. Women have become more and more covered up – even leading to the reductio ad absurdum of one Hasidic sect . Practices that were entirely kosher a generation ago are now entirely treyf.

What, I wonder as I sit in seat 23F, are people supposed to make of this man? My own internalized anti-Semitism arises. This is bad for the Jews. This is why people can’t stand us. No – that’s too much. Really, I have no idea what the Hasid is thinking, what the flight attendants are thinking or what my fellow passengers are thinking.

I can report only what I am thinking. And that is that this moment of obstinacy and disrespect is one that we Jews have created. Our cousins in Israel have given the Haredim everything they’ve asked for in exchange for their political support – just watch as the new government undoes all the progress of the previous one – at tremendous cost to society as a whole. And our institutions here in America continue to dole out benefits to fundamentalists opposed to the very institutions that are feeding them.

Hasidic and yeshivish Judaism are both beautiful expressions of the Jewish spirit. But their attitudes toward the Other (women, non-Jews, non-Orthodox Jews) arose in a particular time, for particular reasons and in response to particular conditions. Those conditions have changed, not just toward greater freedom for religious minorities like Haredi Jews, but also toward a perverse incentivization of the most insular and rejectionist elements within the community.

The result has been pathology. An obstreperous man on an airplane is not so bad; after a few hours, we made it to JFK, safe and sound. Reversing course on Jewish fundamentalism will be a lot harder.