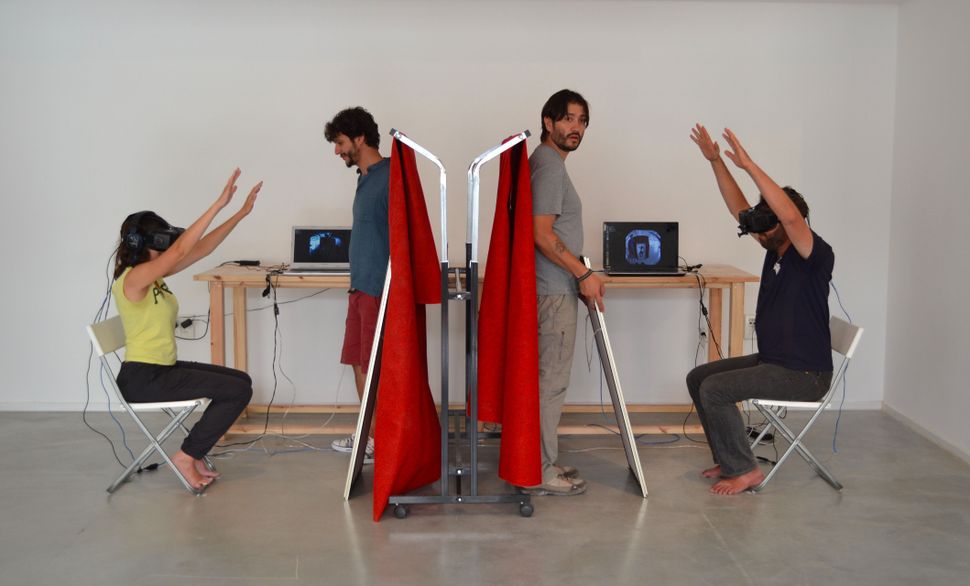 Image by Courtesy of Naomi Zeveloff

Earlier this week, my new friend Yuval Ben Ami came to me with a novel request: Would I be willing to swap bodies for the afternoon?

Yuval, an Israeli writer, tour guide and musician, needed a partner for a gender swap virtual reality project that would allow him to visualize himself in my body and mine in his. It is called the Machine To Be Another.

The project, run by partners from Brazil, France, Mexico and elsewhere first made its Israeli debut at the Musrara Mix festival in Jerusalem.

Yuval has been an out cross-dresser for many years. Now, with Pride Week going on here in Israel, The Machine To Be Another intrigued him as a way to garner new insight into the feminine part of his identity.

As for me, I have been writing about gender and politics for 10 years, including for the Forward, where I published “Transgender and Jewish.”

With Caitlyn Jenner’s gender transition — and the backlash from feminists who insisted she could never really get life as a woman — so prominently in the news, it was an especially interesting time to engage in theexperiment. Could we truly understand what it was like to be each other?

On Monday afternoon we went to an art incubator in Jaffa where we met with the artists behind the project. Over a hummus and falafel lunch, they told us how it worked.

Yuval and I would don virtual reality goggles that were hooked up to one another’s feed. When I looked down, I would see Yuval’s body, and vice versa. Then we would move in slow, synchronized movements to enhance the sensation that we had entered the other’s body. The hope was that we would each get a glimpse of the physical life of the other and a taste of what it was like to be a different gender.

One of the artists, Philippe Bertrand, explained that the project was inspired by the work of Mel Slater at the University of Barcelona. Slater created a virtual reality scenario in which the participant is in the role of a woman whose angry husband grows more abusive by the second.

Bertrand, from Brazil, tried the experiment and couldn’t shake the feeling of being that woman, scared of her own partner. He began to see virtual reality as a powerful tool for creating empathy between people.

“If we could develop more of this perspective-taking, many things would be different,” he said.

Two years ago, he joined with the other artists in Barcelona to create the virtual reality project that would allow two people to inhabit each other’s perspective. Though many of the participants choose to swap genders, it works in other pairings. Bertrand recalled a mother and daughter and also a dancer and a woman in a wheelchair who traded experiences. 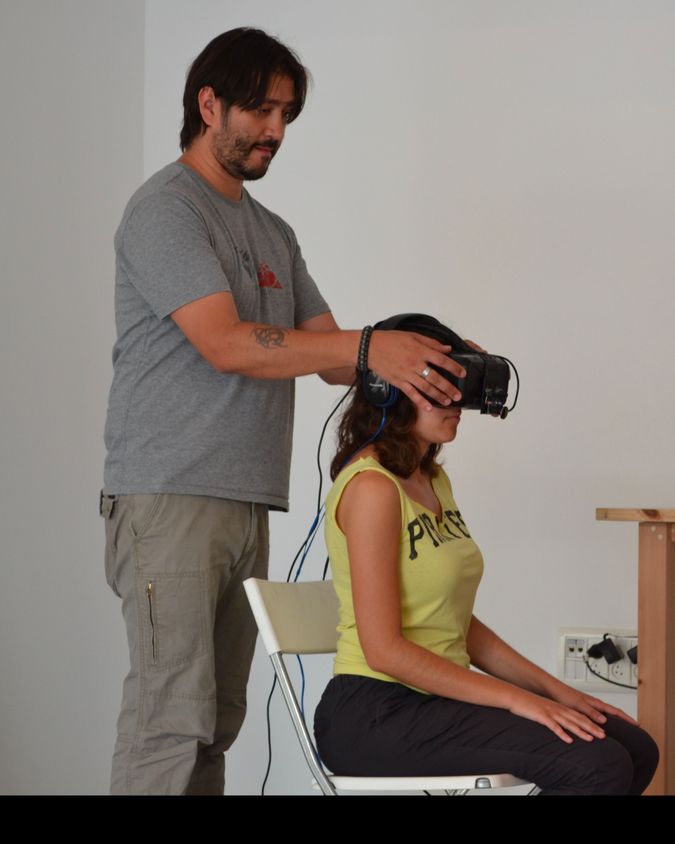 Image by Courtesy of Naomi Zeveloff

After we finished lunch, it was time for our own gender swap. Yuval and I sat on opposite sides of a red curtain as the artists placed the virtual reality helmets and headphones on our heads. I closed my eyes. When I opened them again, I saw Yuval’s body instead of mine. A voice in the headphones directed me to move my hands.

Yuval and I had a bit of trouble with the synchronization, but we had moments of unity in which I melted into the experience, believing that Yuval’s hands were truly my own.

Later on, the artists interacted with us to bring a tactile element to the game, feeding us tahini cookies at the same time, and placing a mask into both of our hands. They showed us both a mirror. Though I was conscious of the machinery facilitating the illusion, there was still a moment of surprise: I was seeing Yuval and Yuval was seeing me.

Then, as a climax, the artists removed the red curtain between us. Seeing myself across from me was surreal and also surprisingly moving, a rare opportunity to view myself from the perspective of another.

We took off the masks and debriefed with the team. Yuval said that it was underwhelming, but in a good way. When he looked down and saw my body, he felt similarly to when he cross-dressed, which made him realize that his own cross-dressing was an authentic expression of femininity.

“I was accepting that I was having your body and gender identity,” he told me later. “It seemed familiar, and thus validating, but of course this doesn’t even touch on the complexity of a woman’s experience.”

For me, seeing Yuval’s hands provided me with a bridge to my masculine side. There was nothing strange or disarming about seeing a man’s hands as my own. It felt natural.

I’m not sure that the experiment helped me empathize with men, but it did make me believe that men and women are more similar than we think we are.

Though the team will leave Israel soon, I hope that one day it takes on the ultimate empathy experiment in this fractured land: one between Israelis and Palestinians.