How Birthright Is Failing the Pro-Israel Cause 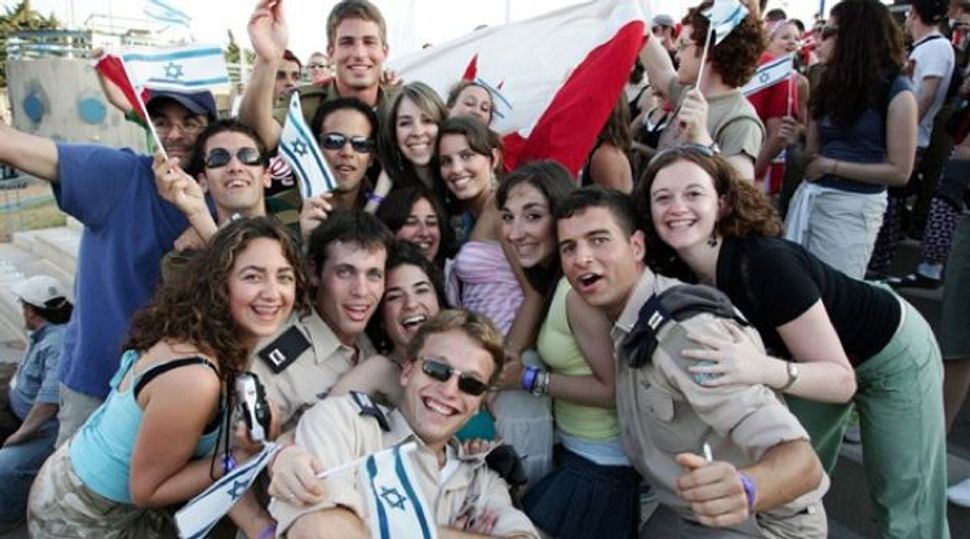 Losing Out: How can Jewish organization harness this excitement? Image by Birthright Israel

“So you’re going to support racist nationalism to get a free trip?”

That’s the question a college housemate asked me when I returned from Birthright. She had seen the freshly uploaded photos that decorated my Facebook profile that week: my friends and I slathered in clay at the Dead Sea, riding camels in the Negev, or posing in a group picture with a view of Jerusalem. She assumed, based on my photos, that I was now a gung-ho Zionist, and she made it her mission to lecture me on Israel’s wrongdoings and Zionism’s moral failures, and to challenge my belief in a Jewish state — it was religious nonsense, she said, lodged in a 3,000-year-old book with no authority to claim that Israel belongs to the Jewish people.

I was taken aback, mainly because Birthright did little to prepare me for this conversation, and the dozens more I would face as my college campus, including its Jewish community, became increasingly divided on Israel-Palestine.

This year, the Taglit Birthright program celebrates its 15th year of sending Jewish young adults to Israel — over 500,000 of us in total. Birthright expects to bring 45,000 participants to Israel in 2015 alone. And yet, a good portion of the participants will be returning to their college campuses, where the Israeli-Palestinian conflict is a hot topic and, often, a point of tension. Campus climates have become challenging enough that Republican business mogul Sheldon Adelson is spearheading the to support pro-Israel student groups and combat the BDS movement to boycott, sanction, and divest from Israel.

As a recent Forward editorial on the Campus Maccabees stated, the campaign’s audience “won’t be inclined to listen to groups funded by Adelson and his cohorts, who refuse to acknowledge that there even is an occupation.” This may define the very crux of the issue in fostering an open dialogue between pro-Israel and pro-Palestine groups on campus: both “sides” must first be willing to acknowledge the other’s narrative. No progress can be made without that first step.

On Birthright, discussions veered toward Jewish peoplehood and the history of the sites we saw. The trip helped us Diaspora Jews foster a love for Israel, but not a thorough understanding of it. But I, like many of my fellow participants, can’t recall a single discussion that hinted at the occupation or the Israeli-Palestinian conflict — and so I found myself defenseless and even a little clueless when my housemate confronted me after my trip. Birthright does an excellent job of introducing participants to Israel and initiating their relationship with the Holy Land. But it fails to broach the more difficult topics quite literally rooted in the land of Israel-Palestine, therefore doing little to educate us on key facts that define the everyday reality of living in a land wrought with conflict, and how to use those facts in challenging conversations to come.

During my time at UC Berkeley, the student senate voted on two divestment bills — one of which failed in my freshman year, and another of which passed in my senior year. The series of senate meetings that led up to these votes dragged on for hours, lasting until 6 am, as students from each “side” approached the podium, made their points — sometimes while shrieking or sobbing — and were booed and cheered by the pro-Palestine and pro-Israel students on opposite sides of the room. The segregation couldn’t be more obvious. But what I perceived, especially my senior year, was that with speeches written prior to the senate meetings — mostly airing one-sided grievances without acknowledging the other side’s concerns or narrative — students were not responding to each other. The meetings degenerated into anything but a true dialogue.

Those senate meetings were a microcosm of how polarizing campus environments have become on Israel-Palestine. As so many college students participate in Birthright, they would be better prepared to engage in these discussions if the trip provided them a better idea of where alternative or opposing viewpoints are rooted. They would even be better prepared to defend the Israeli narrative, if they want to.

How Birthright Is Failing the Pro-Israel Cause