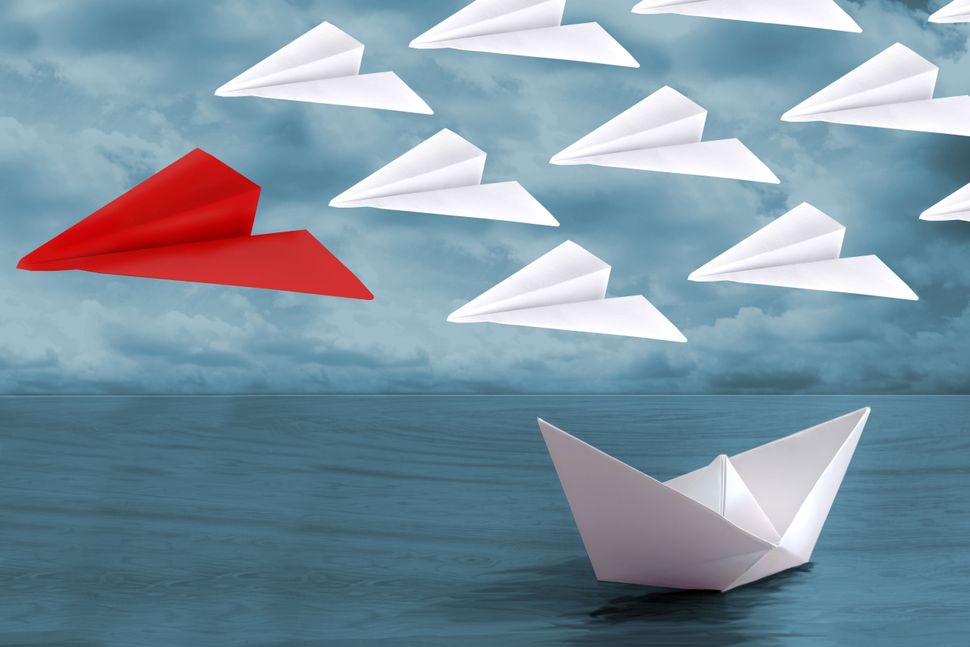 I’ve been part of a dozen Jewish leadership initiatives. Some have been excellent, others were gigantic wastes of time and money. But I wonder if we should move beyond “leadership” in the Jewish community, to value those idiosyncratic and introverted traits that don’t make for good leaders, traits that leaders themselves may not possess.**

Recently I came across the following excerpt from the book, “How To Be Alone,” by Sara Maitland. The book is part of the postmodern self-help series The School of Life:

At the same time as pursuing this “extrovert ideal,” society gives out an opposite — though more subterranean — message. Most people would still rather be described as sensitive, spiritual, reflective, having rich inner lives and being good listeners than the more extroverted opposites. I think we still admire the life of the intellectual over that of the salesman; of the composer over the performer… of the craftsman over the politician; of the solo adventurer over the package tourist.

I don’t think Maitland’s correct that “most people” prefer these qualities; the market certainly indicates otherwise. But I do think that the most inspiring, interesting, creative people have the kinds of attributes she describes, especially in religious and cultural communities. And I think these are the kinds of people who make such communities relevant.

There are many excellent, extroverted, management-consulted leaders in what I call the Institutional Jewish Community (IJC). In terms of professionalization, we’ve come a long way. But is there any doubt that, particularly outside the Orthodox world, the American Jewish community has lost much of its soul? It feels as though we’ve diluted ourselves artistically, spiritually and intellectually, even as our institutions have poured resources into, well, more institutions.

A friend recently posted a query on Facebook asking his cohort to name their favorite living Jewish thinkers. The results were thin: a few novelists, a handful of institution builders. Most of the brilliant artistic, scholarly and spiritual folks I know didn’t appear — and this friend is extremely well connected Jewishly. This was a poll not of the Jewish street, but of the Jewish elite. So why couldn’t they name more names?

Spiritual and cultural creatives are especially valuable in the 21st century Jewish landscape, which is rapidly shrinking and changing. For non-Orthodox Jews, Jewishness is far less of a holistic, tribal, identity-based affiliation than it was even a generation ago. Jewish culture, thought and religion are some of the many sources for the postmodern playlists of millennial and post-millennial Americans.

In such a context, the heroes are the poets, professors and preachers — not necessarily the professionals. For Jews outside the IJC, Judaism is a religion and a culture, not a “peoplehood,” and it is valuable insofar as those with artistic, scholarly or spiritual sensibilities create and connect within it.

There are many places for a 21st-century American Jew to find a supportive community, build a sense of identity or go to the gym. To choose a Jewish space, a Jewish community, requires that there be something specialized, something distinctive about a Jewish cultural/religious/communal sensibility that can’t be found elsewhere. “Leaders” only rarely create that. Creatives, outcasts, poets and mystics do.

Of course, the community needs professional development staff, administrators and institution builders. But without the soulful, quirky, noninstitutionally oriented creatives who would rather sit quietly by a river than mingle at a benefit, we’ll end up with empty edifices; with well-run institutions that don’t really do that much; with a community that doesn’t meet a pressing human need, and doesn’t reach the essential places in the soul that religion and art are uniquely suited to touch.

Which, of course, is a lot like how the IJC looks right now.

Allow me to be clear that this is, for me, a personal question rather than a purely analytical one. As my devoted readers (thank you!) know, I’ve long straddled the worlds of quiet contemplation on the one hand, active engagement on the other. Meditation retreats, spirituality, Burning Man, queer subcultures, a doctorate in Jewish thought, rabbinic ordination — and/but also life as a journalist, a J.D.,12 years of professional activism, various opinions about Israel and the Jewish people. I can often seem like multiple people, even to myself.

It’s quite possible, then, that Maitland is more resonant with what I need than with what Judaism needs. Having recently traversed a long territory of loss and grief, and having only lately reconnected with my own sources of strength and connection — largely by unplugging, quieting down and going off the grid — I find myself disinterested in leadership and self-congratulatory IJC events, and drawn to quieter places. I’ve been teaching more meditation, and doing less business.

But I don’t think it’s just my preference. There may not be a demographically significant hunger for meaning and spirituality among all Americans, but there is one among those who bother with Judaism. God bless the funders, sustainers, managers, volunteers and leaders. But deeper wisdom lies elsewhere.