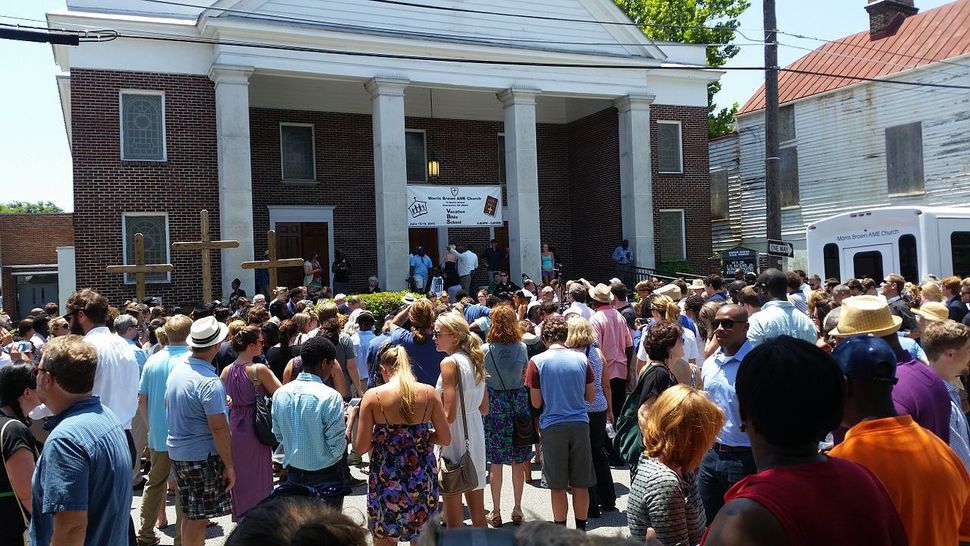 Unlike schools, churches such as the Emanuel African Methodist Episcopal, where nine people were gunned down by a lone shooter on Wednesday, need to stay open and accessible to carry out their mission of community and religious outreach.

That’s why even churches that are known to be on the target lists of supremacists and other predators essentially ignore the risk and keep their doors open to anyone instead of following the example of Western European synagogues, which, in response to the threat of terrorism, have become essentially off-limits to anyone regarded as having no business being there.

While limiting admission to members may work for an anti-missionary religion, to most churches doing so would be to betray Christianity’s mission statement of outreach and salvation.

A possible solution to this predicament recently came from an unexpected direction: an Israeli high-tech firm founded by an observant Jew that is using facial recognition to help American churches screen threats without turning a single Christian away.

Moshe Greenshpan, the 44-year-old founder and CEO of Face-Six, earlier this year launched Churchix – a system that his Tel Aviv-area firm designed to scan the faces of churchgoers to help religious communities analyze attendance, membership — and threats.

The system, Greenshpan told JTA, uses cameras and facial recognition algorithms to scan the faces of people who attend church gatherings and Mass.

“The need for the adaptation of facial recognition to churches stems from the fact that conducting this screening, be it in church or at religious conventions by thousands of people, is impossible to accomplish manually,” he said. “Still, churches want to know how many people frequent them and when to improve their services and measure performance more effectively.”

But what started as a tool for compiling statistics soon turned out to have distinct security applications, Greenshpan said.

“One church in the United States used the system for security by putting into its database the pictures of known sex offenders. Soon enough, the system indicated that an offender indeed entered the church.”

If initial reports about the massacre at Charleston’s Emanuel African church are accurate, then a system like Churchix had the potential of providing ample warning.

Police suspect the shooter was Dylann Roof, a 21-year-old whom a witness placed at the church during the shooting. CNN reported that police are investigating Roof in connection to white supremacist hate groups following the surfacing of a picture of him wearing a jacket bearing the Rhodesian flag and that of apartheid South Africa. The report also said he sat for a long time in the church before he allegedly opened fire.

Had the church used Churchix, and had Roof’s picture been fed into its database of potential threats, police may have had the possibility of reaching the church before the bullets hit.

Greenshpan declined to name any of the churches using Churchix because he did not want to expose any of his clients to pressure from activists who may oppose the system over privacy issues.

“It’s a controversial subject and I understand where the controversy is coming from, but the churches using Churchix are doing it for internal needs, sometimes for security needs, and the information isn’t shared externally anyway,” he said.

Greenshpan did say his company provides services to U.S. churches with many thousands of congregants. He added it was “very suitable” for synagogues seeking to automate admission or limit the risk to volunteer and professional guards. In February, one such guard, Dan Uzan, 37, was gunned down by an Islamist extremist in Copenhagen, Denmark.

If Churchix ends up saving Jewish, Christian and Muslim lives, it will be performing a very different function than what Greenshpan had in mind when he first decided to enter the field of facial recognition.

“As a film enthusiast, I wanted to develop an application that recognizes actors’ faces for the benefit of viewers like me, who can sometimes spend half the film trying to remember the name of the actor or who are interested in film trivia.”

But Face-Six last year was contracted by a large U.S. church which was in the market for a prototype that served as the basis for the Churchix product.

Greenshpan said he decided to develop the prototype into a shelf product “simply because we realized that’s where the money flows.” But he is willing to accept an interpretation of his choice as further proof that God works in mysterious ways.