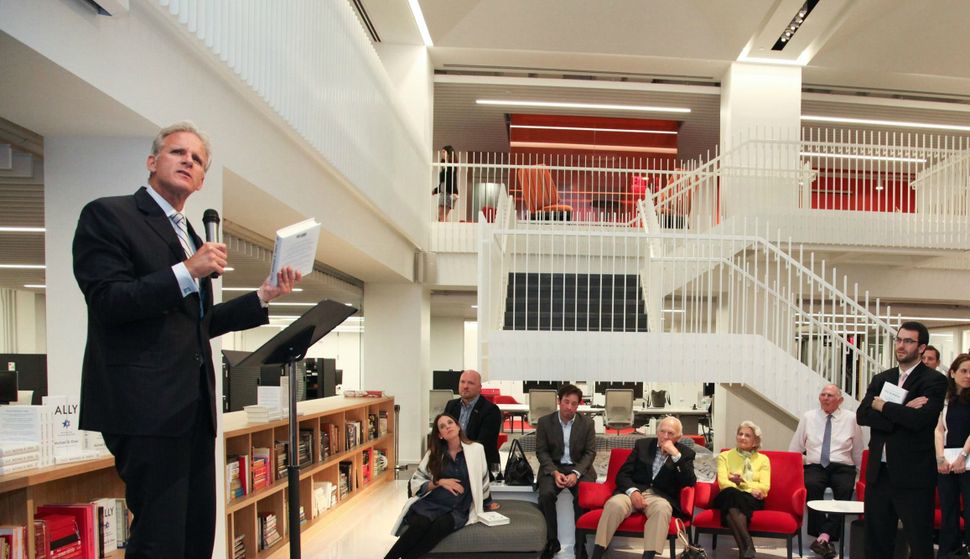 More than two years after moving back from Israel, I still feel like a newbie in weird Washington. Feel the air: so hot and humid that when it rains, it feels more like an ancient marsh rising up from the earth. Thirsty? There’s the innovative use of alcohol, at all times of day, as a replacement for caffeine. Now taste the food: Even the fancy restaurants serve up bland fat-and-carb fare that’s more wonk-fuel than cuisine.

There are special sounds, too. Listen closely, and you will hear the noise machine.

What is the noise machine? It’s a big, organized collection of individuals and groups that actively promotes whatever policy the White House is pushing on a given day, creating the impression of public support — kind of like a sailboat tugging a huge electric fan, humming day and night, pushing the boat forward. Now, I know that every political party and corporation on earth has its own noise machine. But no PR effort is as well funded and sophisticatedly spun as those of the great centers of executive political power. And with the possible exception of the Kremlin, none is as impressive as that of the White House, under any administration. Most people working for that noise machine are not on the payroll of the federal government. Many are paid by supporting organizations. Others volunteer. But you can tell who they are by their uncharacteristic fluidity of speech — it’s easier to rehearse arguments from a talking-points memo—and by the quickness of their outrage at seemingly trivial things.

Right now, the urgent efforts of the noise machine are promoting a historic nuclear deal with Iran. This makes sense: This is the signature policy effort of the past few years (Ben Rhodes called it “The ObamaCare of the second term”). The deadline is very soon, and it’s an obviously tough sell: Talks initiated with the stated aim of dismantling Iran’s nuclear weapons program have morphed into a deal that feels more like “Iran agrees to put off building its bomb until the next administration, and in exchange they get to keep their bomb-building capabilities, have sanctions removed, and implicitly legitimize their expansionism, their terror support, their ballistic missiles and their human rights abuses.” Bait, meet switch.

When somebody comes along who threatens to seriously harm the noise machine’s efforts at such a crucial moment, you can bet that the machine’s vast appalled galvanized chromium umbrage will focus on them. Like when the prime minister of Israel had the gall to accept a congressional invitation to give a speech that called for a different approach on the Iran deal than that of the administration. Or this year, when Israel’s former ambassador to Washington, Michael Oren, releases a book telling of his time in Washington (“Ally: My Journey Across the American-Israeli Divide”) and does it just when the talks are coming to a head. In it we see an insider’s account of the dramatic change of America’s behind-the-scenes policy toward the Iranian regime, dating all the way back to the administration’s first year: from its tepid response to the democratic protests in 2009, to harsh warnings against an Israeli attack on Iran’s nuclear facilities, to actions that contradicted the official White House line that “all options are on the table” with Iran. Without ever slipping into hyperbole, the book’s measured narrative seems to confirm a lot of what the administration’s critics have been accusing it of: enabling the Iranian regime rather than really trying to stop it, while putting a vice grip on the increasingly alarmed Israelis.

Now, like about half the people writing about this book, I have known the author personally. I worked with him years ago, when we were both connected to the same research institute in Jerusalem, when I edited his occasional essays at the journal Azure. We have stayed in touch. We disagree on Israeli politics, and it’s safe to say that he’s no Likudnik. He is also a decent person, a meticulous historian and, as everybody knows by now, a masterful storyteller.

In his new book he tells an incredible story that has been largely drowned out by the noise machine. This has happened because he also does a few things that, from the White House’s perspective, hurt a lot. None of them are unreasonable for a professional historian who had a close-up view of history unfolding. None of them violate codes or red lines in journalism or public debate. He analyzed not just the policies, but also the possible motives of President Obama against his biographical background. He gave his impressions of the uses of Jewish identity among people defending the White House. In the interviews and columns leading up to the launch, he repeated these themes.

This is all pretty standard stuff, and probably wouldn’t have raised much of a storm if they had been published at a different time. Analyzing a leader’s motivations against the backdrop of his upbringing is no different from David Remnick of The New Yorker analyzing the motives of Benjamin Netanyahu in light of his own father. And risking accusations of stereotyping in order to hold a mirror to some American Jews may be uncomfortable, but it is legitimate: Many Israelis, like myself, react the same way when trying to understand some American Jews. Nobody seriously worried about our collective Jewish future should want to silence that perspective. Why, then, the freakout? The noise machine, that’s why.

Oren’s book fell into the noise machine like a clock into a clothes dryer. There is no other way to explain why, for example, the State Department felt that alongside its pretty busy schedule, it should send officials to attack the book — unless they are attacking it for the same reason that they Twitter-bombed a recent New York Times report about the amount of nuclear fuel the Iranians are stockpiling. When faced with a serious threat to its messaging, the noise machine goes into action, like antibodies against a virus. But anyone without skin in the game can see that those involved are overreacting — just as they did when Netanyahu came to Washington, or when he said things he shouldn’t have said in the run-up to an election and then apologized. Politicians in every democracy run for office, say stupid things, walk them back, and everyone moves on when it’s over. I recall Obama saying a few stupid things when he ran for president as well.

Oren has been accused of being a politician. True — though the noise machine had no problem when the same politician spoke critically of Netanyahu’s Washington speech during the Israeli election campaign. He has also been accused of trying to boost book sales — which, last I heard, are how authors make a living. But none of this actually addresses the substance of the story he is telling, or justifies all those well-orchestrated displays of outrage. That’s why David Rothkopf, editor of the FP Group, who despite knowing Oren for decades still finds some of his remarks “offensively wrong,” nonetheless argues that the reaction to the book has been “disproportionate” and that Oren’s “views demand to be published because they are a vital piece of evidence as to why the rift in the U.S.-Israel relationship has become what it is.”

The most important goal of a well-oiled noise machine, you see, is to change the subject. Instead of addressing the criticism, it makes the messenger into the story.

But sophisticated readers should be able to see through it. The book, you will find, is an irreplaceable trove of insight into what will one day be seen as a momentous historical turn. And we will be forever grateful to Oren for having written it.

David Hazony is the editor of The Tower Magazine and is a contributing editor to the Forward.