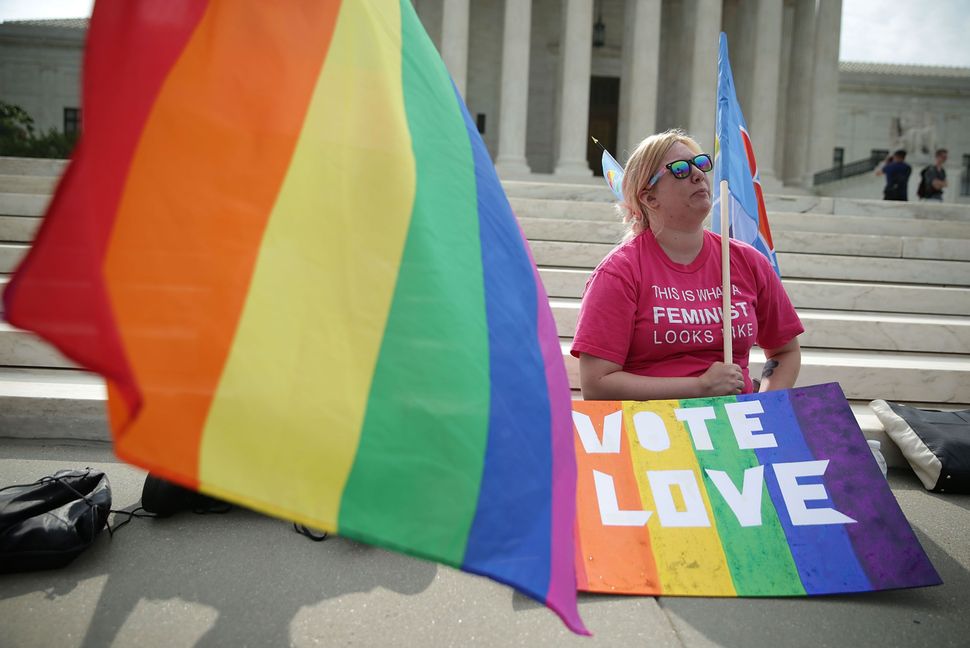 One of the key points in today’s Supreme Court decision overturning state bans on same-sex marriage is that religious and civil marriage, like church and state, are separate.

And yet, the court’s opinion, written by Justice Anthony Kennedy, is itself prophetic in its tone. For the 80% of American Jews who support same-sex marriage, it is a clarion call to our better natures:

No union is more profound than marriage, for it embodies the highest ideals of love, fidelity, devotion, sacrifice, and family. In forming a marital union, two people become something greater than once they were. As some of the petitioners in these cases demonstrate, marriage embodies a love that may endure even past death. It would misunderstand these men and women to say they disrespect the idea of marriage. Their plea is that they do respect it, respect it so deeply that they seek to find its fulfillment for themselves. Their hope is not to be condemned to live in loneliness, excluded from one of civilization’s oldest institutions. They ask for equal dignity in the eyes of the law. The Constitution grants them that right.

This is profound spiritual writing, even if it is found in a secular Supreme Court opinion. It seems to understand the humanity of same-sex couples, and the historical import of this 5-4 decision. 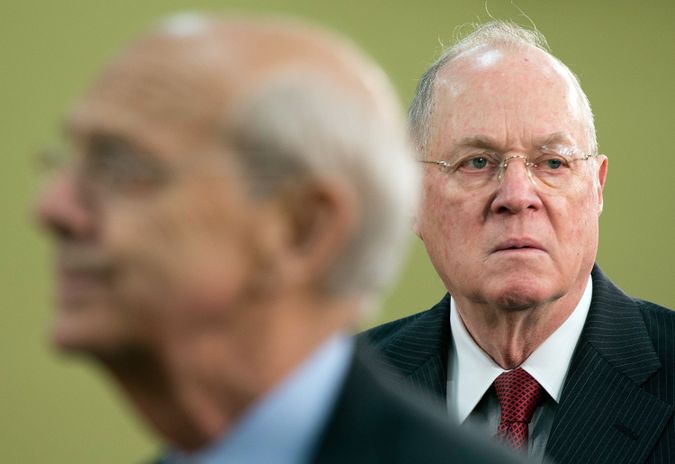 In yet another of his childish, intemperate dissents, Justice Antonin Scalia called Kennedy’s language “a style that is as pretentious as its content is egotistic.” Scalia does have a point, if judicial opinions are meant to be dry, brittle, legalistic documents that never discuss the real lives they affect – like his very dissent.

But as many American Jews enter Pride Shabbat this week, we do so with a text that, while secular in nature, nonetheless takes the moral high ground.

Kennedy outlined four principles, in particular, which color marriage as a fundamental right.

First, “the nature of marriage,” Kennedy wrote, “is that, through its enduring bond, two persons together can find other freedoms, such as expression, intimacy, and spirituality. This is true for all persons, whatever their sexual orientation.”

Second, perhaps echoing Genesis 2:18’s principle that it is not good for the human being alone, Kennedy wrote that “Marriage responds to the universal fear that a lonely person might call out only to find no one there. It offers the hope of companionship and understanding and assurance that while both still live there will be someone to care for the other.”

“A third basis for protecting the right to marry,” Kennedy continued, “is that it safeguards children and families and thus draws meaning from related rights of childrearing, procreation, and education.” While this is usually a conservative talking point, Kennedy observed that “as all parties agree, many same-sex couples provide loving and nurturing homes to their children, whether biological or adopted.”

Thus, “excluding same-sex couples from marriage thus conflicts with a central premise of the right to marry. Without the recognition, stability, and predictability marriage offers, their children suffer the stigma of knowing their families are somehow lesser.”

This is a neat, and truthful, inversion of the conservative claim that procreation is the essence of marriage. That is false, according to Genesis, Jewish law, and centuries of lived experience. Not only are many heterosexual marriages childless, happy, and complete, but as Justice Kennedy notes, many same-sex ones bring children into the world, via adoption, IVF, surrogacy, or other means.

Yes, such methods may not seem as “natural” as the birds and the bees. But then again, modern medicine isn’t “natural” either, yet we use it all the time to save and enrich our lives.

Fourth, Kennedy continued, “As the State itself makes marriage all the more precious by the significance it attaches to it, exclusion from that status has the effect of teaching that gays and lesbians are unequal in important respects. It demeans gays and lesbians for the State to lock them out of a central institution of the Nation’s society. Same-sex couples, too, may aspire to the transcendent purposes of marriage and seek fulfillment in its highest meaning.”

These four principles – the values marriage promotes, its unique bond of companionship, its connection to child-rearing, and the imprimatur of the state – constitute the reasons, according to the Supreme Court, that marriage is a fundamental right, regardless of sexual orientation.

They are also principles of moral reflection which have animated the overwhelming majority of American Jews, secular and religious, to embrace marriage equality as a religious, as well as a civic, value.

None of this is to demean the importance of traditional values. Then again, traditional Jewish marriage once included polygamy, concubinage, and marriage to slaves. It was entirely arranged, and was more of an economic arrangement than a romantic one. Even today, most traditional weddings involve the purchase of the bride by the groom, after which she becomes his property. The Hebrew word for husband, ba’al, also means ‘owner.’

So marriage has changed, and changed again. And several years into same-sex marriage in all but Orthodox forms of Judaism, it has not caused the skies to fall – even if some Haredi rabbis believe it has caused an earthquake now and then.

Perhaps the most important aspect of Kennedy’s opinion, from a Jewish perspective, is its embrace of the distinction between secular and religious values. Writing for the court, he says:

Many who deem same-sex marriage to be wrong reach that conclusion based on decent and honorable religious or philosophical premises, and neither they nor their beliefs are disparaged here. But when that sincere, personal opposition becomes enacted law and public policy, the necessary consequence is to put the imprimatur of the State itself on an exclusion that soon demeans or stigmatizes those whose own liberty is then denied. Under the Constitution, same-sex couples seek in marriage the same legal treatment as opposite-sex couples, and it would disparage their choices and diminish their personhood to deny them this right.

This is what Orthodox opponents of my civil rights seem to miss. (The Orthodox Union, which finds plenty of time to attack gays but no time to condemn the rampant sexual abuse in its own rabbinate, issued a particularly disgusting press release today.) The same laws that protect Orthodox Jews, and the same Supreme Court that interprets the constitution to grant them special rights to special food and clothing and employment practices, are the ones that now protect my right to live a fulfilling life with my legally-married partner.

Sometimes those laws coincide with my religious beliefs, and sometimes they don’t. But I’m not trying to pass Shabbat Blue Laws to make Brooklyn like B’nei Brak, even though I observe the Sabbath myself. That’s not the country I live in, it’s not one I would want to live in, and it’s not one that Jews would be safe living in either.

As Jews, we may continue to disagree about the parameters of marriage. But today’s historic decision is still a religiously significant moment. Not just because Jewish law requires obeying the law of the land. But because sometimes, though certainly not always, the country in which we live teaches us how to live justly.