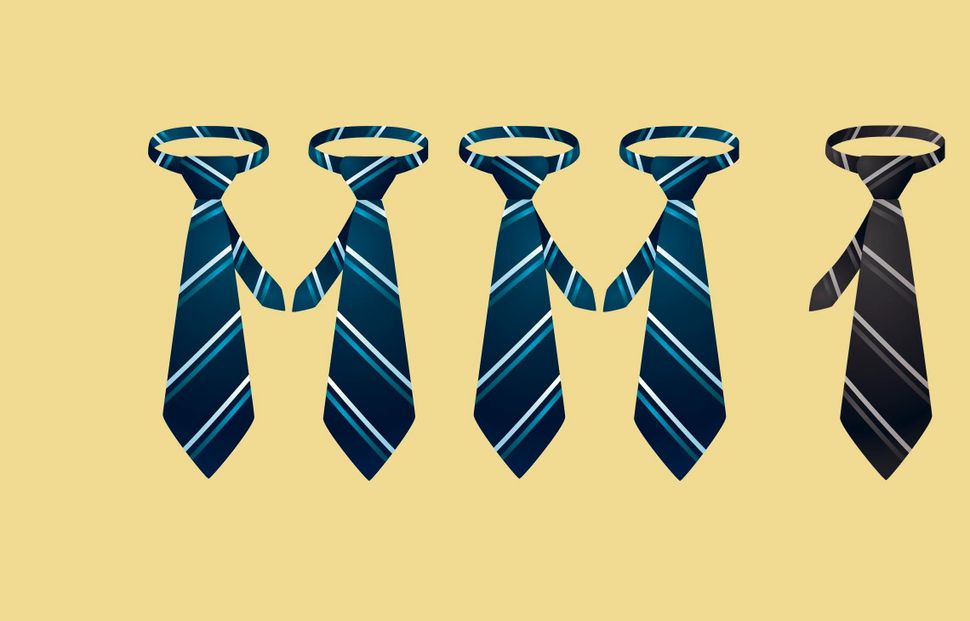 Here’s one of the things rarely admitted to, or even talked about, by those of us who’ve left the Haredi world. We are often plagued with what might seem to some a trifling concern: “fitting in.”

After the decision to leave has been made, the first pair of jeans purchased, the new social circle formed, the old worldview rejected and a new one scaffolded if not yet fully built, what comes is the burning need to shed the feeling of alienness, to learn the dominant cultural language, to not have to explain why you’ve never heard of Kurt Cobain. Or why you speak with an Eastern European accent. Or why you don’t get the joke about Spinal Tap.

I remember one of the first times I badly wanted to shed this alienness — back when I was still a Hasid. I was 26, a father of 4, and I was preparing for my first real job interview. I had taught myself computer programming, rounded it out with a short course, then posted my résumé on several Internet jobsites. The very first call I got was for an interview at Bloomberg LP. The Bloomberg LP.

The initial thrill of success was quickly followed by a strange anxiety. I was a Skverer Hasid from New Square, New York, who had spent a lifetime speaking mostly Yiddish and studying religious texts; I had never worked anywhere but in Hasidic environments, had never shaken a woman’s hand, had never watched TV or attended a sporting event or listened to rock ’n’ roll music, had never worn any uniform but my long Hasidic coat and my broad-brimmed fur hat. How would I fit into a New York City corporate environment?

It was then that I decided to buy the one item of clothing that seemed essential to helping me fit in.

I would buy a necktie.

I had never worn a tie before, nor did I know anyone who wore one. But it felt right — that most basic item of male attire unique to the modern Western world. An item of such little apparent utility, I imagined, must serve some highly significant function — coded but unspoken. It must make a difference

The tie made no difference. I didn’t get the job, and when I was told so the next day by the recruiter, I felt extraordinary relief. The day before, as I waited for my interview, I observed all the other Bloomberg employees and listened to them speak. I understood their words, but I couldn’t make out the subtext or decipher their cultural context. I knew then that I could never fit in, and I ended up being more anxious about the prospect of being hired than of being rejected.

Now, years later, I better understand what I felt then intuitively. A workplace is more than just a professional environment; there’s a social aspect to it as well, and that’s where I knew I would find myself challenged.

It isn’t just me. According to a recent article in The New York Times, managers look for a lot more than perfect résumés. Researcher Lauren A. Rivera has studied the hiring practices of the nation’s top banks, consultancies and law firms, and discovered that interview prospects are chosen not by their job qualifications, but in “snap judgments by managers about who they’d rather hang out with.”

Now that I’ve left the Hasidic world, I realize that it isn’t simply a particular item of clothing, or speaking English well enough, or even having the right college degree. It comes down to a lifetime of accumulated experiences, and this is what I, and many of my peers in the ex-Haredi world, often come up against, not only in the workplace but also in every aspect of life — at school, in the gym, even the neighborhood bar.

Leah Vincent, author of the memoir “Cut Me Loose,” which chronicles her experiences after leaving ultra-Orthodoxy, told me what it was like when she first went to college: “It felt like everyone else was part of a coherent society that I couldn’t penetrate. Like there’s some great chasm between me and the rest of the world, and I didn’t know how to cross it.”

Others echoed this. Ari Mandel, who grew up in the Nikolsburg Hasidic sect in Monsey, New York, and joined the army in his 20s, told me it was hard for him to find commonalities with his fellow recruits. “Someone mentioned Saturday morning cartoons, and I wondered: Should I pretend I know what he’s talking about?”

Many of my friends from ultra-Orthodox backgrounds are now getting into elite schools, the Ivies, or looking for corporate or not-for-profit positions, but they often share few of the cultural experiences of their new peers, and I hear of this anxiety of not “fitting in” a lot.

Is this anxiety real? Is it in our heads?

“It is not just in your head,” Rachel Berger, who serves as director of community engagement at Footsteps, a New York City-based organization that offers peer and professional support to those who leave the ultra-Orthodox world, told me. “Ultimately, it’s an issue of assimilation. ‘Cultural fit’ [in a workplace environment] essentially means, can you match our social and class expectations for this job.”

The anxiety certainly lessens as the years pass, especially in a place like New York, with its incredible diversity of cultures, ethnicities, accents, nationalities and religions. “As I got older,” Vincent told me, “I realized that a lot of people have stories. Lots of people have unusual backgrounds.”

To leave the Haredi world is to undertake a reinvention process that could last years, decades and in some cases, a lifetime. Buying that tie was just the beginning for me. It is the process of defining a new individual identity as well as developing a sense of belonging — be it to a particular community or to mainstream society in its broadest sense.

Sometimes, though, it takes particular experiences to make you feel like you made it. A friend who is nearly 40 told me recently — only partly in jest — that he wants to organize a prom for those of us who’d never had one. To some, the idea might be puzzling, but to others, an ersatz coming of age experience is just what they need before situating themselves as adults in a mainstream world.