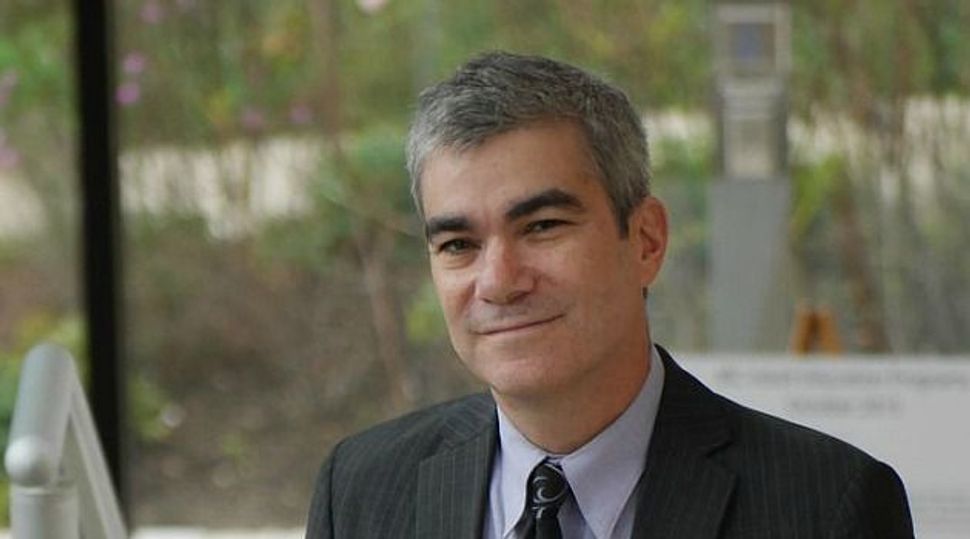 Stand by Me: Rabbi Brant Rosen tends to the spiritual needs of a suburban Chicago synagogue, even as he speaks out fiercely against the Israeli occupation. Image by ALEX GRANGE

The Jewish blogosphere was alive with commentary after Rabbi Brant Rosen, the co-chair of Jewish Voice for Peace’s Rabbinical Council, on July 5 the foundation of Tzedek Chicago. This new congregation takes a radical approach to Judaism: it welcomes Jews and non-Jews, rejects any form of nationalism, and openly declares that the creation of a Jewish nation state resulted in an injustice against the land’s indigenous people. It touts social justice as its foundation — hence the name “tzedek” — and it is based in Chicago, itself a hub for Jewish social justice movements. In a certain communal scene, Tzedek will fit right in.

READ MORE: Why I Can’t Go to Your Non-Zionist Synagogue

Though as a post-Zionist I appreciate the reduced focus on Israel as a node of Jewish identity and the congregation’s strong stance in its mission statement against anti-Semitism and economic injustice, I might be religiously too conservative for this group. Given Tzedek’s leanings, I suspect my traditionalist (though strictly egalitarian) liturgical preferences may be a tad too far to the right for a congregation that barely defines itself along liturgical lines. Still, I find Tzedek’s formation heartening – and interesting. Given the growth in groups like Jewish Voice for Peace after Israel’s war in Gaza last summer and through the continued existence of occupation, it was only a matter of time before some synagogue or another established itself on these newer, left-of-center lines.

If you ask me, Tzedek Chicago is old news, but it’s also radically new.

On the one hand, my hipster side can snidely inform you that Tzedek Chicago is building on a long, long line of religious Jewish non-Zionism. In American communal discourse, we tend to associate this non-Zionism with Haredi groups like the Satmar and Skverer dynasties in New York, or with the pre-World War II Reform movement. We also associate it with secular Ashkenazi movements — including Communist groups and the Yiddishist Workmen’s Circle (Arbeter-Ring). Yet there is a continued tradition of non-Zionist religiosity in the United States and diaspora more generally — be they those who hold by a certain interpretation of Rabbi Yeshayahu Leibowitz’s (himself a Zionist) explanations of Jewish sovereignty, those who do not believe Israel is redemptive in any fashion, and those who have always remained silent in synagogue for fear of being ostracized. Tzedek Chicago is now a congregational, far more liberal manifestation of this impulse that never quite died.

Yet there’s also something new and very “millennial” in Tzedek Chicago’s mission statement. It frames Judaism as something modern and “beyond” typical tropes: “a Judaism beyond nationalism”; “a Judaism beyond borders.” Membership is not barred to those in relationships with non-Jews or to their non-Jewish partners; the membership fee is kept low in an era of growing fees; solidarity with social justice movements is considered a core aspect of the congregational mission.

As I read that mission statement, I wondered: is this what the 21st-century congregation looks like? Anti-racist, non-Zionist, social justice-oriented, centered neither on preventing intermarriage nor on praising Israel? This is the Judaism that a portion of our generation has sought to build and create — and if Tzedek Chicago succeeds, we may see many more congregations of its kind popping up around the country. The old congregational model — the holy trinity of Israel, bloodline, and day schools; a lack of criticism and worries about “what will the goyim say” — seems far too retrograde to the many people Tzedek Chicago seeks to engage.

In continuing the tradition of religious anti-Zionism, Tzedek Chicago is building the potential for a very different kind of Judaism in the 21st century. I myself am still holding out for a “Conservadox post-Zionist moment” that might never happen: a liturgically conservative, egalitarian Judaism that is divorced from the Zionism it is so often tied to today. But Tzedek Chicago — if it succeeds — could help propel a community already detached from its old nationalisms farther along in its trajectory. It could also push the “mainline denominations” to reconsider how they appeal for the support of a Jewish generation with very different concerns and values.

After all, Tzedek’s greatest contribution to 21st-century Judaism may be a congregational model designed and sustained along the justice-oriented, non-nationalist lines millennials have long craved.