Did Satmars Bite Hand That Feeds Them With Anti-Israel Message at Draft Rally? 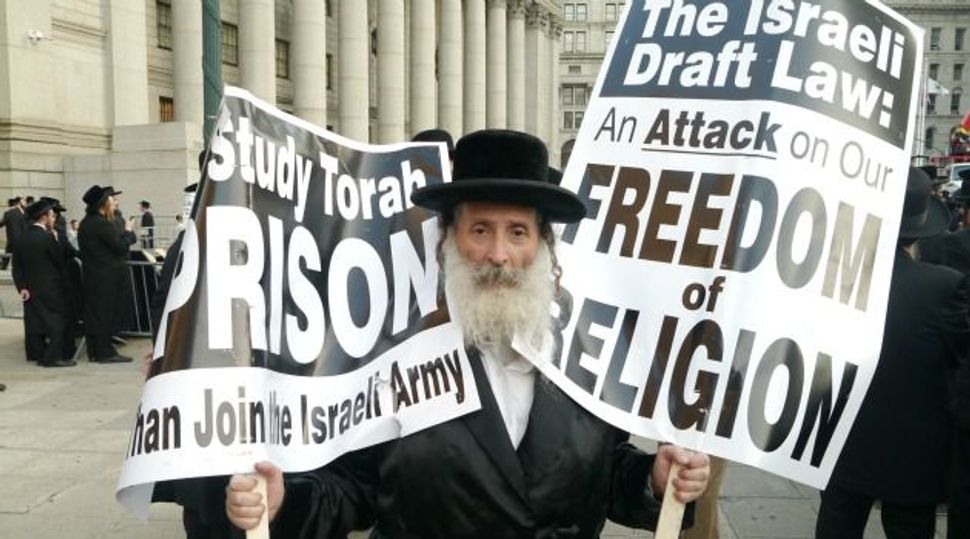 Controversial Message: Anti-Zionist rhetoric and signs were commonplace at a rally denouncing Israel?s efforts to draft the ultra-Orthodox. Will the views damage relations with mainstream Jewish groups, just as they ramp up efforts to address poverty among Hasidim? Image by yermi brenner

If you needed social services from New York’s fervently pro-Israel mainstream Jewish community, would you organize a tremendous anti-Israel rally in its backyard?

Despite assurances that it wasn’t their intention to do so, that appears to be exactly what the Satmar Hasidic community did on June 9, when they gathered a reported 30,000 men in lower Manhattan to protest Israeli efforts to draft thousands of ultra-Orthodox men into the army.

Satmar Hasidim are known for their anti-Zionist theology, but organizers insisted before the protest that they would focus specifically on the Israeli draft. Yet despite a strictly enforced ban on anti-Israel placards, speakers addressing the crowd in Yiddish voiced anti-Zionist sentiment.

“Today’s rally is a declaration of war against the enemies of God and the enemies of religion,” said the Monsey, N.Y.-based Rabbi Yaakov Weiss, who was the protest’s opening and closing speaker. “We hope the evil Zionists will not be successful in destroying our holy Torah studies.”

Speakers used the Yiddish word reshoim, or evil people, to describe Israeli politicians specifically and Zionists generally. And Rabbi Nachman Stauber, who leads a Satmar yeshiva in Queens, made a comparison in his address between Zionists and Amalek, the biblical Jews’ greatest enemy.

The rally came days after the release of a UJA-Federation of New York poverty study finding that 45% of Hasidic families in the New York area live in poverty. The mainstream Jewish community in New York has responded to this need in recent years, supplying substantial resources to Satmar through the Jewish Community Relations Council of New York and the Metropolitan Council on Jewish Poverty, among other agencies.

In the days after the rally, however, responses from the mainstream Jewish community suggested that the protest had strained ties with the Satmar community.

“I would call on the Hasidic community to think carefully — I would not connect our help to them to their policies — but I just very clearly believe that they should think carefully about the ramifications of such a rally here on these shores,” said Rabbi Shmuel Goldin, president of the Rabbinical Council of America, the Modern Orthodox rabbinic association that condemned the rally.

The JCRC, which has particularly close ties to the leadership of Satmar in the Williamsburg section of Brooklyn, defended the group’s right to protest, but objected to their language. “Sunday’s Foley Square protest against an announced Israeli policy was an expression of free speech,” said Michael Miller, executive vice president and CEO of the JCRC, in a statement issued in response to a Forward inquiry. “However, some of the speakers attempted to outrageously demonize the IDF and the government of Israel. We consider such rhetoric offensive and we categorically condemn it.”

Neither UJA-Federation of New York nor the Met Council responded to inquiries about the anti-Zionist statements read from the stage at the Satmar rally. And in the days leading up to the June 9 rally, mainstream Jewish communal officials displayed a relative indifference to the Satmar plans.

“I think that our constituencies and the people in our community understand that we can have some profound disagreements in some areas, but still share the sense that we are one people,” said David Mallach, managing director of the Commission on the Jewish People at UJA-Federation, days before the rally.

That equanimity is in sharp contrast to the attitude New York Jewish officials often display in the lead-up to public protests that criticize Israel from the left. The JCRC spent months lobbying against a March 2012 vote at a Brooklyn food co-op on whether the co-op would consider boycotting Israeli goods. Jewish communal officials secured support from local politicians and launched awareness-raising campaigns, eventually defeating the boycott effort.

The unequal response could be due to the unusual nature of the Satmar protest, which was the first massive ultra-Orthodox protest against Israel in decades. Though small clusters from the fringe ultra-Orthodox Neturei Karta group often show up at public events to voice harsh criticism of Israel, they never number more than a few dozen. The last time observers remembered a similarly large group of ultra-Orthodox Jews protesting Israel in New York was in the mid-1980s, amid a furor over ads featuring a bikini-clad model on bus stops in Orthodox neighborhoods in Jerusalem. When then-Jerusalem mayor Teddy Kollek visited a Manhattan hotel for an event, thousands of protesting Satmar Hasids rallied outside.

The June 9 protest was also unusual because of the participation of both of the grand rebbes who claim the leadership of the Satmar community. Aron Teitelbaum and Zalman Leib Teitelbaum, brothers whose rift split Satmar in 2006, both attended the rally, sitting less than 10 feet apart. It marked the first time the two had cooperated on any public event since their dispute began.

In a speech to followers before the protest, Aron Teitelbaum said that efforts had been made to draw attendees from across the ultra-Orthodox community and not just the Satmar Hasidic sect. Those attempts were boosted by a letter from a leading non-Hasidic ultra-Orthodox rabbi named Chaim Kanievsky — a letter later shown to have been forged.

Event spokesman Michael Tobman insisted prior to the rally that the event was focused on the narrow issue of the draft, and was not broadly anti-Israel. “This is to denounce in the strongest possible terms the misguided impending Israeli policy to conscript and to extend mandatory military service,” Tobman said. “This is about a very specific policy and political issue. It’s just not about that larger meta-ideological schism,” Tobman said, referring to Satmar anti-Zionism.

Posters advertising the event, however, suggested a broader anti-Israel message. “The evil rulers in the Holy Land want to incite and seduce young men and teenagers to acquiesce to idol worship and to participate in the impure army,” read Yiddish and Hebrew posters, copies of which were obtained and translated by the Forward.

Did Satmars Bite Hand That Feeds Them With Anti-Israel Message at Draft Rally?