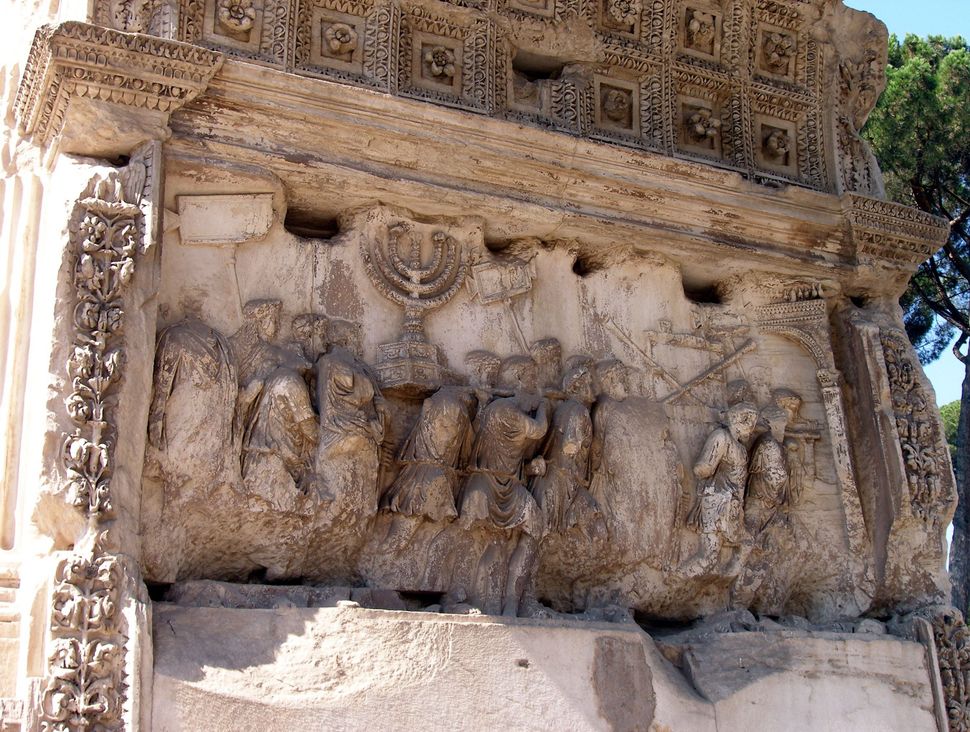 That was the Jews’ sin, which God punished by allowing the Romans to level the Second Temple.

On Tisha B’Av Sunday July 26, we mourned the destruction of both Temples. But as I wilted during the 25-hour fast, I was bothered by the notion that the second sanctuary burned because God was angry — not just at our enemy, but also at us.

The Talmud says: But why was the second Sanctuary destroyed…? Because therein prevailed hatred without cause. That teaches you that groundless hatred is considered as of even gravity with the three sins of idolatry, immorality, and bloodshed together.

The Second Temple burned because we screwed up.

The Talmud says we ripped each other apart instead of our enemy. When we should have united to beat back the Roman army, we instead argued among ourselves, even killed each other. Sinat chinam — translated literally as “free hate”— was our downfall.

I get it: God destroys when we destroy each other.

We will pay for Jew against Jew.

Freedman’s prologue invoked the ancient sin that led to our exile and slaughter: “The Second Temple, Jews came to believe, was lost less to the Romans than to their own sinat chinam — pure hatred, groundless hatred.”

But our current rabbis see the parallel and the warning: We are risking our proverbial edifices, our centers of Jewish life, when we go at each other.

Freedman explored our contemporary civil wars through sharp stories: a zoning battle in a Cleveland suburb in response to an influx of Orthodox Jews; a dispute in Los Angeles over whether to introduce feminist language into the Amidah prayer, and a lawsuit against Yale, brought by pious students who refused coed bathrooms. These are just a few of the flashpoints that can splinter a people.

Certainly I saw internecine strains come to a boil last summer during the Gaza war. And this entire year, as I’ve been attuned to the Jewish calendar, I’ve paid more attention to the roiled Jewish press, Facebook posts and Twitter feeds.

Sinat chinam is alive and well.

“I’m afraid to look at my email in the morning,” confessed Rabbi Judith Hauptman, a Talmud professor at the Jewish Theological Seminary. “It’s breaking my heart, what’s happening today. Back in Temple times, there were Jews fighting over all these political factions. They were stabbing each other over political differences, possibly religious differences. And we’re still fighting each other. Maybe not with swords.”

On Tisha B’Av, since I chose to be in Connecticut with my family rather than in a New York synagogue, I turned to the closest rabbi (geographically) to guide me through the holiday: Rabbi Burt Visotzky, who happens to have a house near mine, and who happens to be an expert in Midrash. Visotzky was the first rabbi I interviewed for this series, and it seemed fitting that he be my last.

I was more cranky than usual as we sat down with the Lamentations text in my living room. (Have I told you I prefer eating to fasting?) The rain had stopped, but the sky remained stubbornly gray.

I asked Visotzky to help me understand why Eichah — the reading for Tisha B’Av — harps on our culpability in the Temples’ demise.

“God commands us to love one another,” he explains. “So when we hate one another and things fall apart, the rabbis say, ‘Well, this is the punishment that God predicted for us.’”

As for whether God destroyed the Temple by omission or by commission, Vistozky demurs : “Is God’s hand an active hand or a passive hand? That’s not for me to decide.”

The moral of the story, he contends, can be drawn from the Talmud — Gittin 56 — when “Jewish thugs” (Visotzky’s words) burned their fellow Jews’ food supplies so that they would have to go to war due to the famine that ensued. “I think it’s actually wonderful for the Talmud to have this notion that hatred is corrosive and destroys the community from within.”

Earlier this summer, David Azoulay, Israel’s religious services minister — a member of the Knesset — said he doesn’t consider Reform Jews to be Jewish.

I took that personally. My Reform congregation — 6,000 strong — is, in my estimation, eminently Jewish. Moreover, the Reform movement happens to be the largest denomination in America, so Azoulay’s condemnation impugns a heck of a lot of us.

One could shrug off his blanket indictment as extremist, but when he claims that non-Orthodox Jews are “people who try and falsify” the Jewish religion, it smacks of sinat chinam.

Burt’s own exasperation with Israeli divisiveness comes through as we talk in my living room.

“We’re commanded to love one another,” he repeats. “Ve’ahavta Lerei’acha kamocha. Love your neighbor as yourself. We’re commanded to love God. So why are we teaching hate, and not just Jew against Jew? Why have we raised a generation of Israeli kids who can set fire to a bilingual school and then, when they’re sentenced at trial, hear them say it was worth it? Why are we raising a generation of kids in yeshivot who can spray-paint on a wall, ‘Death to the Arabs’? Or throw bags of feces on people coming to the Wailing Wall because they’re not Orthodox? I mean, how did this happen?

“And we’re all equally guilty,” he continues. “I’ve certainly been intemperate in my rage against politics that I don’t care for — and I’ve probably said so too publicly. Instead of working to find ways to talk to one another, we find ways to shut one another out. That’s really the tragedy of this holiday. If you want something to mourn for, that’s it. We’re reproducing what cost us the Second Temple. We’re just wallowing in sinat chinam.”

I know it sounds naive, but I really can’t fathom the acrimony; it feels fundamentally un-Jewish to me. And profoundly dispiriting.

But as I come to the end of a full Jewish year, I’m left with the opposite sensation: I have felt surprisingly supported by even those rabbis who are miles away from me on the spectrum of observance. And I have drawn wisdom from myriad Jewish perspectives.

Before Labor Day, I’ll post a deeper digest of the year I spent living Jewishly, or at least researching, observing and writing about all 18 holidays (plus two Sabbaths). But as I reflect, in this 29th dispatch, on what I’ll remember most from my expedition, it is not sinat chinam — the callousness of my people.

What will stick with me is the difficult but important rigor of finding meaning. Making every holiday matter — not equally, but essentially.

Judaism endures because it resonates, because it withstands the blows of disputation, and even gets enriched by fierce debate.

So though I resist the Tisha B’Av takeaway that God would punish us to the point of destroying the center of Jewish life, I see that this is perhaps just what God intended: The Temple needed to go, in order for the tradition to ignite beyond that one location on the map.

And indeed it has. Jewish life percolates today — whatever its internal divisions and despite all the catastrophes (several subsumed in Tisha B’Av) that have threatened to wipe us out.

I’ll keep baseless hatred in mind as a cautionary tale, because one can’t be immune to its ugliness. But as I head into the next Jewish cycle, more privately this time around, I’m choosing to focus on klal yisrael — the whole of Israel: a sense of shared community, and a reverence for the calendar that has kept us mindful, rooted and linked.