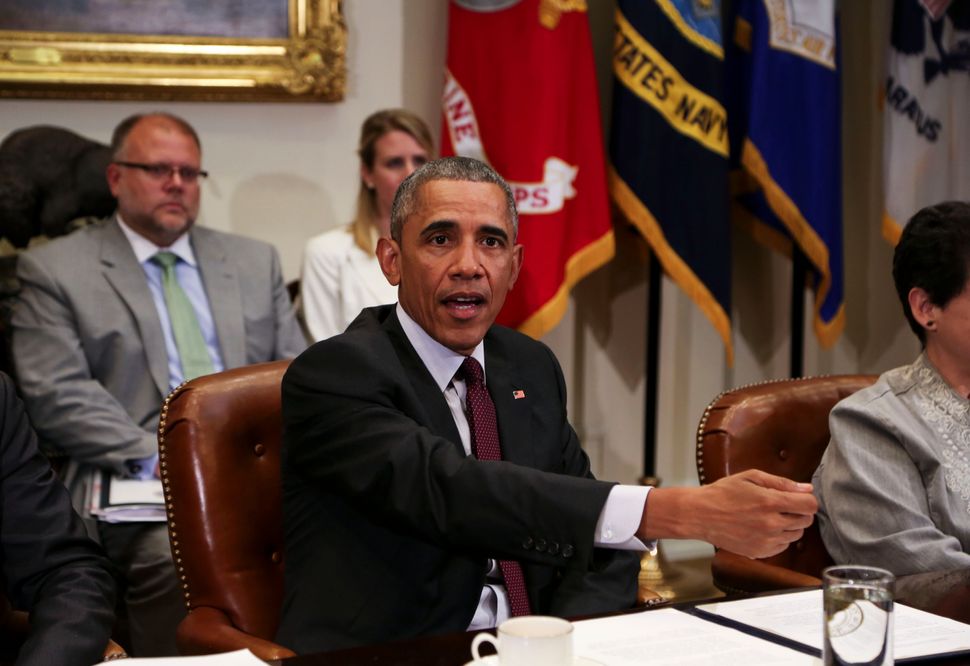 Hoping to energize activists on the left to take on the battle for approval of the diplomatic deal with Iran, President Obama is invoking the memory of the Iraq war and reminding his allies of who led the nation into it.

But what many liberals hear as a powerful rallying call to avoid entering another military quagmire in the Middle East could seem tone deaf to some in the organized Jewish community.

Obama, in a conference call he convened Thursday with activists from progressive organizations, sounded alarm bells and warned against the growing power of opponents of the Iran deal who are pressuring members of Congress to vote to disapprove the agreements.

In his 20 minute appeal, Obama repeatedly weaved two themes known to strike a chord among progressives: the Iraq war, and the role of big money in Washington’s decision making process.

When put together it sounded something like this: Criticism of the deal, he said, comes “partly from the $20 million that’s being spent lobbying against the bill,” and “partly from the same columnists and former administration officials that were responsible for us getting into the Iraq war.“

The wording, though chosen carefully as not to conflate the two groups, treaded into a highly sensitive area for some in the Jewish community.

The mention of $20 million is a clear reference to the American Israel Public Affairs Committee, which is leading the lobbying efforts against the Iran deal and has raised, through a sister organization, this sum in order to fight for disapproving the agreement.

Tying AIPAC and those who pushed for military intervention in Iraq in the same argument, could be read as accepting the notion that the American Jewish community was behind the Iraq war. It is a notion the organized pro-Israel community has been trying to fight off for over a decade.

The reference was not lost on Jewish officials who are attuned to this sensitivity.

“Canard,” tweeted William Daroff of the Jewish Federations of North America as Obama spoke on the conference call.

And while Obama may have had no intention of giving credence to it, the pronounced equation he made between those supporting the Iraq war and those opposing the Iran deal, is likely to make many in the community feel uneasy.

As is the reference to “billionaires” bankrolling the political effort to defeat the agreement in Congress.

“You’ve got a whole bunch of folks who are big check writers to political campaigns, running TV ads, and billionaires who happily finance SuperPACs and they are putting the squeeze on members of Congress,” Obama said.

Again, Obama made no direct reference to any individual involved in funding the drive against the Iran deal, but it is clear that most of the money raised by pro-Israel groups for this campaign has come from Jewish donors.

And the Republican Jewish Coalition was quick to issue a statement condemning Obama for “demonizing” opponents of the deal and reminding Jewish leaders that when George H. W. Bush in 1991 about the power of lobbyists, he was criticized by Jewish groups for what was seen as a negative reference to the political power of Jewish Americans.

But regardless of Jewish American sensitivities that may have been irritated, Obama’s call to arms directed at progressives could indicate that push back against the deal is greater than the White House had initially expected. The president told listeners he had spoken to members of Congress who are “getting squishy” in face of the pressure from opponents of the deal.

With Congress leaving for its summer recess, the battle over the Iran deal is moving to the grassroots level. Obama and his team are well aware that pro-Israel groups have been urging their members and supporters to reach out to their representatives in their home districts during the recess and try to convince them to vote against the deal.

He now hopes that progressives will mount a counter attack, warning them that sitting idle will lead to a repeat of the 2003 Iraq war scenario. Only this time he wants the shouting to start sooner rather than later.

“Everybody got really loud and really active after it was too late,” Obama said about the anti-Iraq war effort, “as opposed to on the front end.”