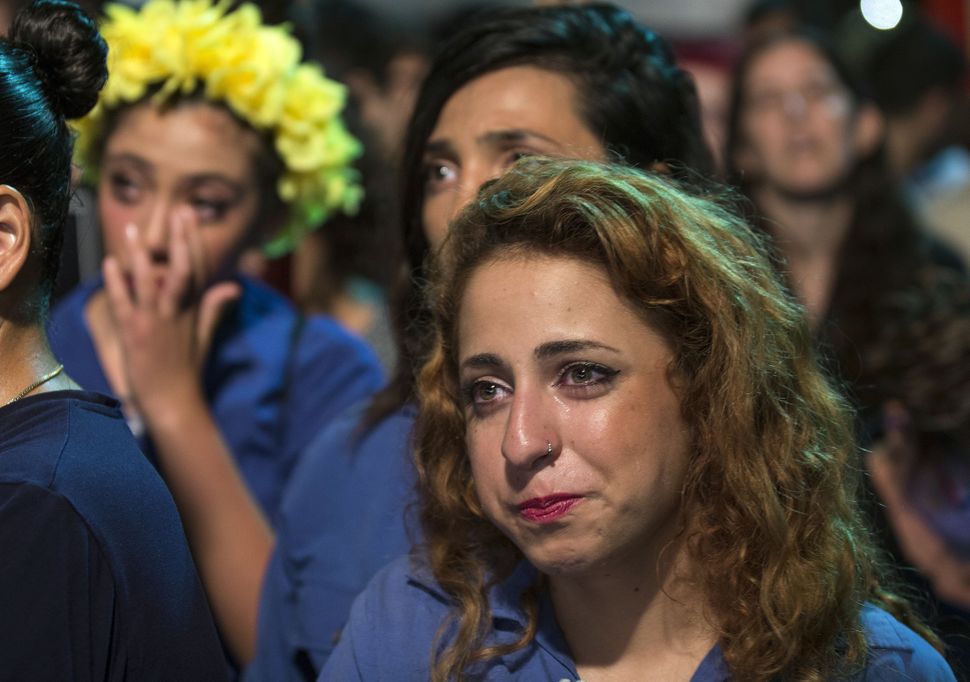 Instead of focusing on the violence involved, the human suffering or the actual blood being shed, some ultra-Orthodox newspapers focused only on philosophy.

In response to the stabbings at Thursday’s Jerusalem Gay Pride Parade, those ultra-Orthodox news sources that bothered to report the violence at all referred to the “toeiva” or abomination parade.

Toeiva, the Biblical Hebrew term that some translate as abomination, is a charged word (see Jay Michaelson’s piece on the linguistics here). The word comes from Leviticus 18:22, the Biblical source decrying homosexuality, which says that man lying with another man is a toeiva, which the King James Bible first translated as abomination.

Both in America and Israel, the ultra-Orthodox press approached this story outside of both journalistic standards and Jewish ethics. How can these papers be viewed as reputable news sources when their biases are flowing faster than schnapps at a kiddush?

The Yeshiva World News, for one, included standard who-what-when-where information in their article, but in an almost blame-the-victim type sentence, ended with the fact that the parade has always been met with “bitter opposition” in Jerusalem.

To me, and any other informed reader, ending off on such a sentiment reads almost as if the marchers had it coming to them. The marchers belong in Tel Aviv, as they’ve been marching there since the 1990s, but in Jerusalem? In the holy city? No, Jerusalem is the place for religious and traditional people, they write, which presumably means not the gays (though whether or not that’s true, accurate, or reflects reality is questionable). The article’s ending minimizes the violence perpetrated at the parade.

But the Yeshiva World News is just the tip of the iceberg.

The Jewish Press, a New York-based print and online publication, also had a questionable approach to the story. The story in and of itself was lacking verifiable sources. In addition to one eyewitness, the only other quoted voice was that of an expert — who happened to have led the parade’s opposition this year. Bentzi Gofstiin, (sic) of the right-wing Lehava organization, who is a sworn follower of Meir Kahane, is quoted like this: “’We are against such acts against Jews,’ said Gofstiin. However, he stressed that a ‘parade of abomination,’ as he put it, should not be permitted in Jerusalem, just as Jews are not permitted to pray on the Temple Mount.”

This, just as in the case of The Yeshiva World News, minimizes the violence carried out. Instead of focusing on the issue at hand, it subliminally reminds the reader that the parade is an abomination and even though there was a violent atrocity, the parade itself is an aberration.

Hamodia didn’t cover it on their English site.

The Hebrew site Kikar did not cover the parade, but did in fact cover the stabbing. In my opinion, this was the most tastefully done. In a strongly worded editorial, Kikar writes that since the parade violates their values and ideology, it is not and has not been covered in their publication. However, they do condemn the stabber’s criminal activity, and they will pray for the victims.

All in all, the site was rather responsible in its attempts to create nuance in reporting this event. In their own words, Kikar “strongly condemns the criminal acts of a psychopath Yishai Schlissel,” the stabber, who they call out by name. They cite the Biblical commandment “thou shalt not kill,” to affirm the religious grounds on which they are condemning his actions. They add, however, “there is no contradiction between condemning this heinous crime and holding the [parade] is an abomination.”

But the fact that they refer to stabber Yishai Schlissel as a psychopath is troubling. If he is a psychopath, then he is unstable, and unstable people can’t be held 100% accountable for all of their actions. Presumably then, this, like an article in Salon pointed out after the Charleston shooting, is a way to absolve him of his guilt. Say he’s crazy and then it’s not as bad. It’s a way to absolve the community and society of blame.

Rav Elazar Shach, the late, revered Ponevez yeshiva head, is quoted as having told his followers that the zealousness of Phineas cannot be repeated in this generation. It is impossible. By Phineas, he meant the vigilante Biblical character who killed two wrongdoers, Kosbi and Zimri. He saw wrong so he felt compelled to immediately right it — he did not wait for the Elders, Moses, or even God. He took it into his own hands, and for that he was rewarded. Talmudic rabbis celebrate this, saying that Phineas, in fact, was rewarded because he was zealous for God.

But where are today’s ultra-Orthodox leaders, echoing this sentiment?