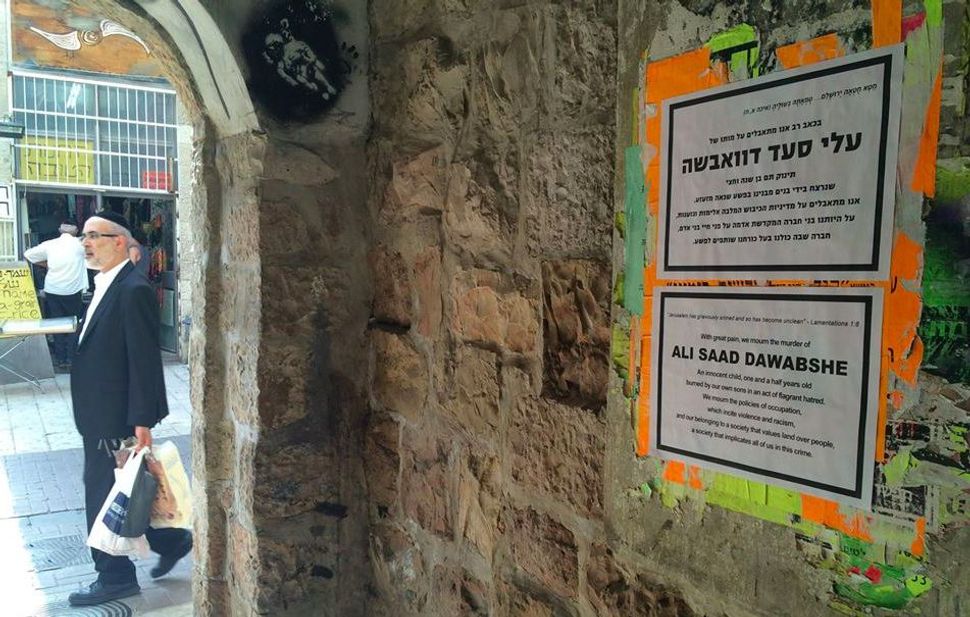 Since the Jerusalem Gay Pride parade stabbing that killed teenager Shira Banki, and the arson in the Palestinian village of Duma that killed toddler Ali Saad Dawabshe, grief and outrage have permeated Israeli society.

Now, those emotions have given way to stark images that are trending on social media.

Death notices, in the style of the public mourning notices that are commonplace across Israel, — posted in public areas and online, in Hebrew and English — mourning the two lost children and noting the climate of hatred that spurred on these Jewish extremist attacks. Controversial for their inventive remixing of a “classic” Israeli cultural phenomenon, the mourning notices easily attract attention. They were created by Ilana Sichel and Romy Achituv, writers and artist-activists who sought to commemorate what they called the victims of “our society’s ills: our intolerance, our hatred, our prejudice.”

Sichel said she was inspired by a similar poster at Yad Vashem — the one put forth by the city of Tel Aviv to commemorate the sinking of the Struma and death of Jewish refugees in 1942.

“When I learned of the ‘price tag’ attack in Duma and the brutal arson and murder of the toddler Ali Saad Dawabshe, that poster I saw came to mind and I imagined traditional mourning notices with his name on them all over Jerusalem,” Sichel said by email.

Such mourning notices would, apart from the name, not seem out of place to average Israeli viewers — until those viewers take a closer look. 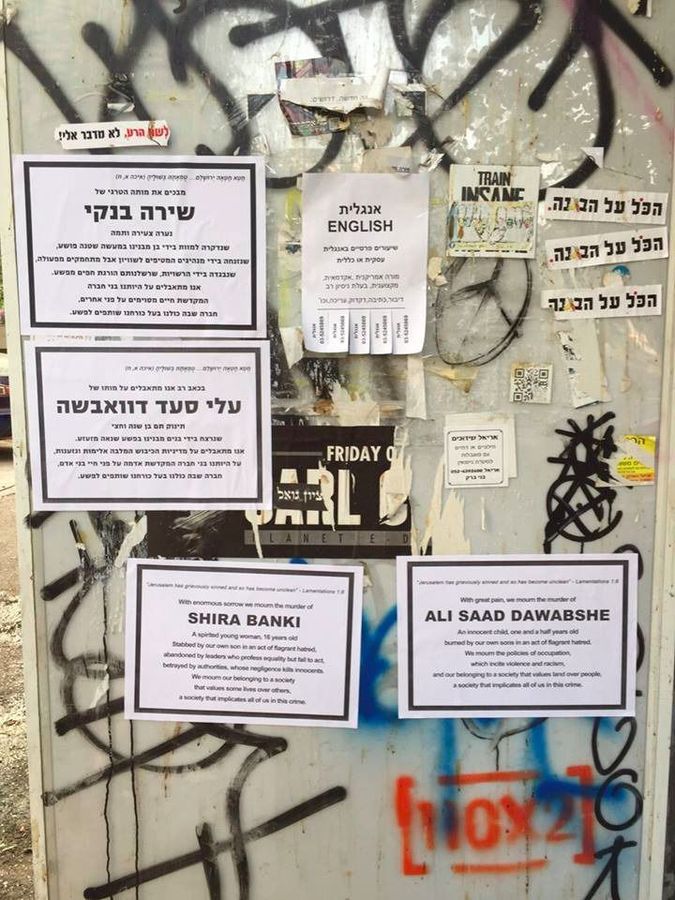 “I particularly liked the thought of a Jewish reader who first glimpses the poster with a familiar feeling of human curiosity and compassion and then realizes she is being asked to extend that sympathy to the other side,” Sichel noted, calling her project “a sort of visual urban activism.”

Reaction has been swift — and many commenters on social media, in Israel and the Diaspora, have reposted the work. Much of their praise is sourced in the fact that these posters deliberately and concisely link the two murders to wider Israeli government stances and policies.

There are many, however, who object to the mourning for a Palestinian toddler. Sichel said one shop owner who appreciated the poster for Shira Banki refused to allow any posters once he saw that Dawabshe was commemorated as well.

Yet others have helped Sichel and Achituv find places for posters — one passerby helped them find high-traffic areas by his cosmetic shop in Tel Aviv.

Amidst all this, a few have wondered: Why aren’t the posters in Arabic? After all, one of the children mourned was Palestinian.

“We wanted to create the immediate visual impression of familiarity and sympathy, and to have the surprise of some of the posters honoring a Palestinian to come with actually reading it,” Sichel responded.

That subversion of the common norm — which lays bare the horror of the status quo — is perhaps what makes the posters so bracing. 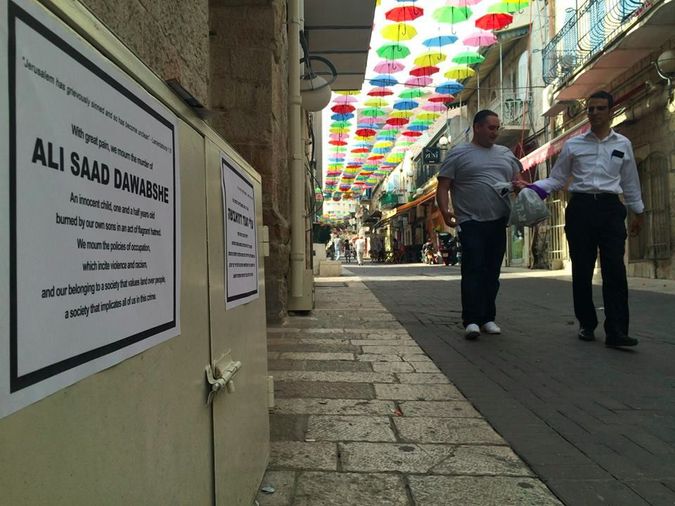