For Each Day of the Gaza War, These Jewish Women Are Fasting 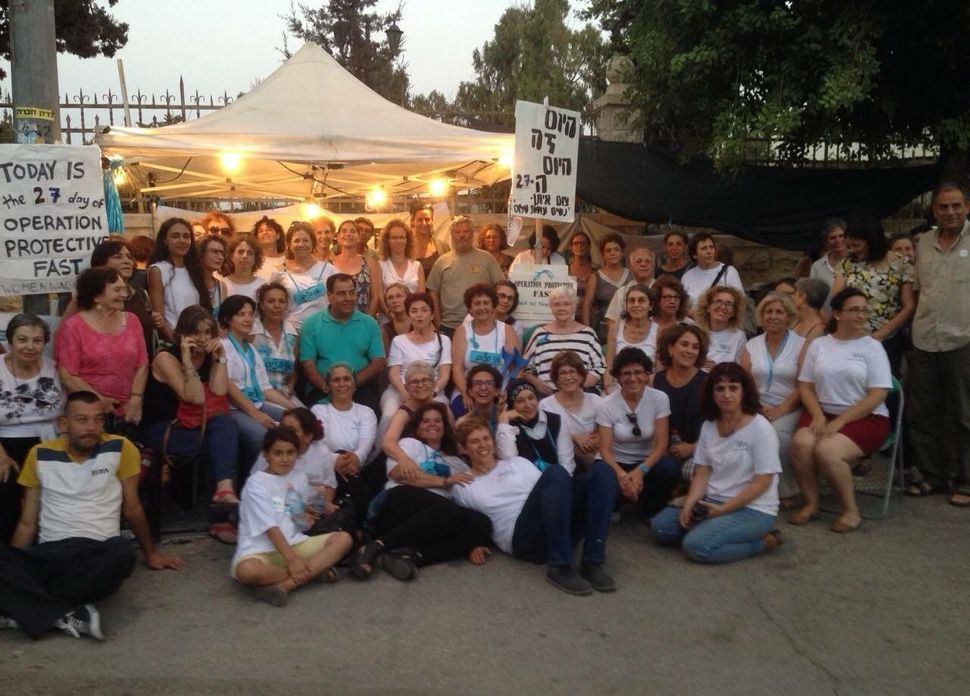 At the protest tent, I am with three friends from my northern Galilean village. We are greeted warmly by the women already in the tent and about to end their fast. Each woman wears around her neck a sky-blue cloth sign that says ani bi’tsom (“I am fasting”). One by one the women ending their fast remove the cloth necklaces from around their necks and hang them around our necks, to pass the protest-gesture on to us. We each feel the ritual charge of the connections being established between us, strangers who are suddenly intimates in our shared refusal to accept the unacceptable: this ongoing violence and warfare.

We are in the Women Wage Peace protest tent, situated one block from the Israeli Prime Minister’s residence, where women are fasting in shifts for 50 days – the 50 days of last year’s horrific war in Gaza. Every day, new women join the protest, fasting in shifts of 25 or 50 hours. We are demanding that our government enter immediately into renewed peace negotiations with the Palestinian Authority to precipitate a political resolution to this bloody conflict. We are protesting the terrible senselessness of last summer’s war, and our government’s refusal to do everything in its power to prevent the next war. We are protesting the profound failure of our politicians to provide us with a viable future in this land.

We settle into the white plastic lawn chairs, and the hours settle into a seamless flow, punctuated by encounters with supporters stopping by to encourage or detractors stopping by to argue. Twice a day, at 11 am and 7 pm, amid the steady traffic noise, we pull our chairs into a circle, to share our names and tell each other why we are here at the protest tent. For many of us, last summer’s war was the breaking point — our first experience of having a son in combat, of sitting hours and hours by the news, hearing reports of each new horror, the names of the boys who would not return from the front, the numbers of unnamed Gazan civilians killed. In the tent, we share the remembered terror of knowing one’s child is in grave danger, and is fighting in a war that could have been avoided, that will lead to nothing but greater hatred and renewed warfare.

In the evening circle, a woman sitting across from me starts weeping as soon as she starts speaking. Her words are all salt-covered. She tells of waking her son last July to receive his call-up orders by phone, of her son leaving the house, of having no contact with him for weeks. He came home from the war and told her nothing of what he saw and did; now, a year later, she is weeping and weeping in continued horror over what she imagines he carries, and over what she imagines could have been. 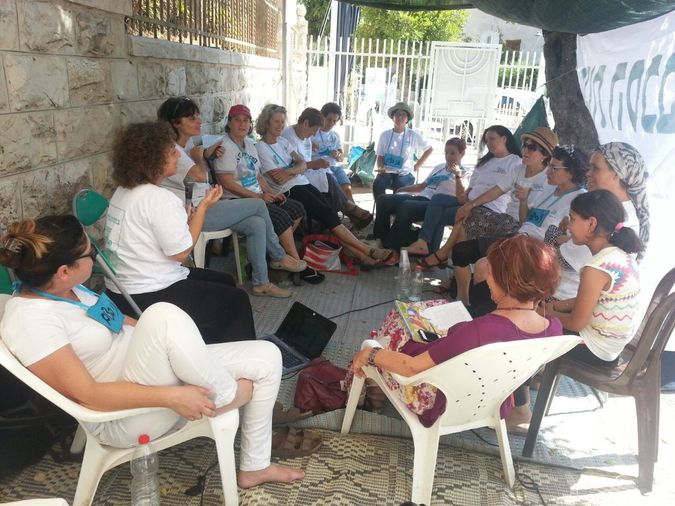 Next to her sits Rami Elhanan from the Forum of Bereaved Families. He tells us his 14-year-old daughter Smadar was killed in downtown Jerusalem in 1994. He says he knows that only negotiations and ending the Occupation will stop the bloodshed. “What I expect of our prime minister,” he says, “is to go down to the Gaza checkpoint with two chairs, to sit in one and extend the other chair to the Palestinian leadership. I expect our prime minister to sit in that chair, for however long it takes, until the other chair is occupied and talks begin.” I visualize the two chairs he speaks of, one filled with an Israeli brave enough to fight for peace. In that same moment I see also his household’s empty chair, the chair that will never be filled.

In the circles, I am struck by how many of those who have lost beloveds to the violence are present and fasting, or supporting in other ways. There is Michal, a woman in her late 60s, who tells us that she lost her older brother in the Sinai Campaign. When we query her on details, she tears up and responds curtly, telling us she doesn’t want to talk about it. Her brother was killed more than 60 years earlier and she still can’t talk about it. Then there is Tali, a woman in her early 30s, who tells us about her grandfather. He was killed in the War of Independence at age 27. She tells us how she and her siblings are all older now than he would ever get to be – their 27-year-old grandfather – and still they call him Saba….

I listen and think how decades of violence have subverted time itself, how endless killing has disrupted the natural order. The granddaughter is older than the grandfather killed 50 years before she was born. The mother is living the son’s nightmare days. The father grieving his daughter sits in a tent of protesting women and talks of empty chairs waiting to be filled. 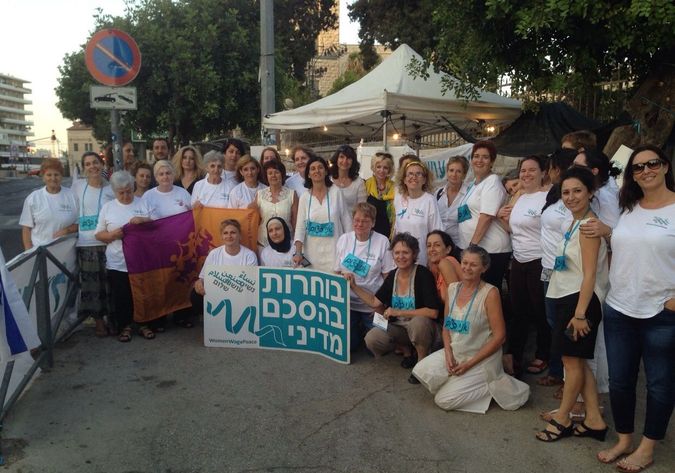 As the day proceeds, the shade of the tent recedes, and we pull our chairs closer together, to fit into the ever-more-slender strip of shade. The heat is heavy, even the pavement seems to be burning. A young mother, her infant son named Maor (light) tucked into a snuggly strapped across her chest, stops by and sits with us, telling us she tries to come to the tent every day. Caressing her sleeping baby’s back, she says: “What could be more important than this?” When Maor wakes, we take turns holding him until he makes it clear it’s time to go. Then, suddenly, the last light of day fades, and cool Jerusalem night is upon us in the street-side tent.

Every night at 10, the tent has to be folded up, due to city ordinances. Arnon pulls up in his small green van to collect the equipment that needs overnight storage elsewhere. Every morning at 8, he comes back to reassemble the tent. Quietly and faithfully, he supports the fasting women, makes this protest his own.

The next morning, as our own fast nears its end, four young boys hover at the edge of the tent. One of them, dressed in a black t-shirt, is clearly looking for a fight and calls out to us: “Traitors!” To the four of us from the Galilee, these boys look like the religious counterparts of our own sons. Our energy level is low at this point, but we rise from our seats to talk with them. The boy wants only to argue, to shout and quote biblical verses to us. But beside him is a dark-haired boy in a red t-shirt, and he seems to want something else; he is listening, or trying to listen, to what we are saying about the possibility of peace.

The black t-shirt boy shouts that his red t-shirt friend lost his brother in last summer’s war, as though proving the errors in our protest with that terrible news. Our gazes turn wholly toward the quiet red t-shirt boy; we ask his name and learn it is Noam. My friend Merav tells him her own son is named Noam, and the two of them move off to the side to talk. I too step aside, with the Proverbs verse about darchei noam suddenly echoing in my mind: the ways of our faith are pleasant, we are told, and “all its paths are peace.” This young Noam who buried his brother a year ago is looking for that peace, I think. As are we all.

For more information, see the .

For Each Day of the Gaza War, These Jewish Women Are Fasting