Ashkenormativity Is Twice as Common — and Harmful — in LGBTQ Jewish Spaces 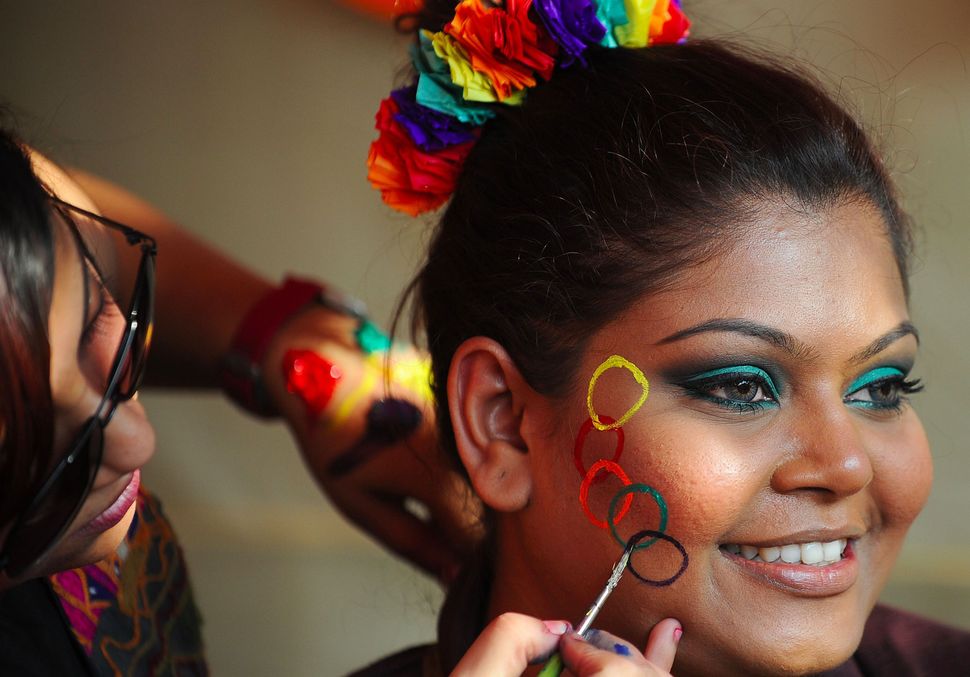 After Kiddush on Shabbat, someone comes up to me to critique my recitation. Either the person asks why I pronounced the last word as “hagefen” rather than “hagafen,” or I am less-than-politely informed of the “correct” pronunciation. When I respond that my Sephardic custom is to say “hagefen,” the reply is always the same: “I didn’t realize you were Sephardic.” Putting on my educator hat, I don’t take time to explain the nuances of my multiethnic identity.

This interaction occurs in my life regularly. With Ashkenormative assumptions bolstered by the invisibility of my non-Ashkenazi identity, my conversation partners always find me — a white, American, progressive Jew — exotic. Ashkenormativity, the systemic, communal, and/or individual assertion of Ashkenazi as the default Jewish identity, the assumptions we make based on that assertion, and the resulting marginalization of non-Ashkenazi Jews and non-Jews in Jewish space, leads to people expressing surprise at my ethnicity about once a month.

In LGBTQ-specific Jewish spaces, the interactions happen much more frequently: once or twice an event, on average. That uptick, present whether the space is religious, cultural, political, or intellectual, does a disservice to the LGBTQ Jewish community.

Added Ashkenormativity in LGBTQ Jewish spaces begins innocently enough. We circle the rainbow wagons around the Magen David: Our obvious difference as LGBTQ Jews, combined with millennia of homophobia and transphobia, poses a threat to our standing in the wider Jewish world. So we cling to the idea that apart from sexual orientation and gender identity, we are exactly like other Jews. In America, this ideal Jewry is a white, Eastern European, kugel-eating, hagafen-saying, occasional shul-going bunch with Yiddish-smattered speech. In order to give ourselves as much insulation from critique as possible, in order to protect ourselves as LGBTQ Jews, we minimize deviation from the Ashkenazi American Jewish norm.

To solidify our alignment with this norm, LGBTQ Jewish communities emphasize the ways in which queer experience and Ashkenazi experience are parallel. Shared histories of stigmatization and exclusion become platforms that serve as the building blocks of solidarity between the Ashkenazi community and the LGBTQ community, painting the intersectionality of Ashkenazi and queer identities as natural rather than exceptional.

This also paints the intersectionality of non-Ashkenazi Jewish identities and queer identities as less natural than the Ashkenazi counterpart. The existence of non-Ashkenazi LGBTQ identities threatens this alliance, constructed to mitigate further pain for LGBTQ Jews. In another attempt to mitigate that pain, LGBTQ communities alienate communities where homophobia and transphobia exist, especially already-othered communities like Sephardic and Mizrahi Jewish communities. In LGBTQ circles, there is a myth that certain groups, especially religious ones, are incapable of abandoning hate. Imagine how that attitude impacts a recently out Persian Jew.

Since Ashkenormativity reinforces the idea that there is an authentic cultural and religious expression LGBTQ Jews (and all Jews) must adhere to, it creates shame in those who cannot or do not fit the norm. Ashkenormativity further marginalizes already marginalized people, especially those people who should most benefit from the relative safety of LGBTQ Jewish spaces, like people of color and Jews by choice whose communities of origin have inflicted the same pain the LGBTQ Jewish community was created to avoid. Circling the rainbow wagons around Ashkenazi identity also alienates historically biased communities, creating further misunderstanding of LGBTQ people in non-Ashkenazi communities and of non-Ashkenazi Jews in the LGBTQ community.

The rest of the Jewish world holds up a mirror exposing our own hypocrisy, as garish as a pairing of plaid and polka dots. We in the LGBTQ Jewish world can no longer pretend we don’t see the harm Ashkenormativity causes. We even identify experiences of it with our experiences of cisnormativity and heteronormativity. So what can we do?

First, we need to understand all the dark nooks and crannies of Ashkenormativity, and we need to learn about the varieties of non-Ashkenazi identities. Then, we need to let go of the idea that there is an “authentic” Judaism and that we may not be Jewish enough. Instead, let’s envision a complex tapestry of beautifully woven expressions of Judaism, each simultaneously unique and a part of the whole. Let’s question our Ashkenormative assumptions when they happen. LGBTQ Jews are practiced at this because of our experience confronting cisnormativity and heteronormativity. If we prioritize this consciousness, the LGBTQ community won’t just stop feeding Ashkenormativity — we’ll be models for dismantling it.

Jay Stanton is a writer and activist living in Chicago.

Ashkenormativity Is Twice as Common — and Harmful — in LGBTQ Jewish Spaces