On August 10 an Israeli stand-up trio named “Ma Kashur” of themselves dressed up as Ethiopian Jews rapping about racism. Ostensibly, the video was meant to highlight the Ethiopian anti-racism protests that swept through the country earlier this year. But there was a troubling aspect to it. Why were they wearing blackface, when they could have done the same routine without it?

The video, which was panned in the Ethiopian community as offensive, highlights the frequency and normalcy of blackface in Israeli mass media and culture. Those who excuse the presence of it, primarily for comedic purposes, often point to the fact that Israel doesn’t have the racial history that makes blackface in America so offensive. They insinuate that if you just take away some of the racist baggage of the United States, then having a bunch of white guys putting on black makeup to play black people for laughs is acceptable.

But I am the father of a multi-racial child in Israel, and I don’t want him to have to grow up watching shows that feature people with Afro wigs, blackface and mock-Ethiopian accents — shows that always portray Ethiopians as bumbling and stupid.

Consider some examples. On January 27 the popular comedy program “Eretz Nehederet,” akin to “The Daily Show” or “Saturday Night Live,” ran a program featuring parodies of international news broadcasts. One of the characters was from Rwanda TV and showed a woman with a giant orange hat, an “African” style shirt, beads and blackface, talking in what the well-heeled show thought was a “Rwandan accent.”

If you’ve ever watched an actual Rwanda TV broadcast, you’ve seen male hosts wearing suits or women newscasters dressed just like their counterparts in Europe. But for the Israeli audience, it was “normal” to dress up anyone from Africa in an outfit (not even a Rwandan one) and have them put on ridiculous accents (in English, whereas many Rwandans speak French) with their faces blackened. When the same show parodied the BBC news team, they didn’t have an Ethiopian actor wear “whiteface” and put on a mock-generic European accent.

Blackface in Israel dates back to the 1950s. Dr. Eitan Bar-Yosef of Ben-Gurion University has researched the phenomenon and published articles on it. He notes that “numerous theatrical productions in 1950s Israel employed blackface to simulate negritude [sic] on the stage.” This was the case when Habima staged a drama based on Alan Paton’s “Cry, the Beloved Country” in 1953.

Every once in a while, an Israeli using the blackface motif gets chided for crossing a red line. In September 2012 it was revealed that a social media director for the IDF had posed for a photo with Dead Sea mud on his face and labeled the look “Obama style.” The resulting outrage was mostly international, not domestic. One article at Slate.com asked: “Does blackface carry racist connotations outside the United States?” In Israeli talkbacks, people claimed: “It might be in poor taste, but I have thicker skin than politically correct liberals.” This is the general tone when anyone critiques blackface in the Jewish state: It’s people being overly sensitive. Don’t be so PC. 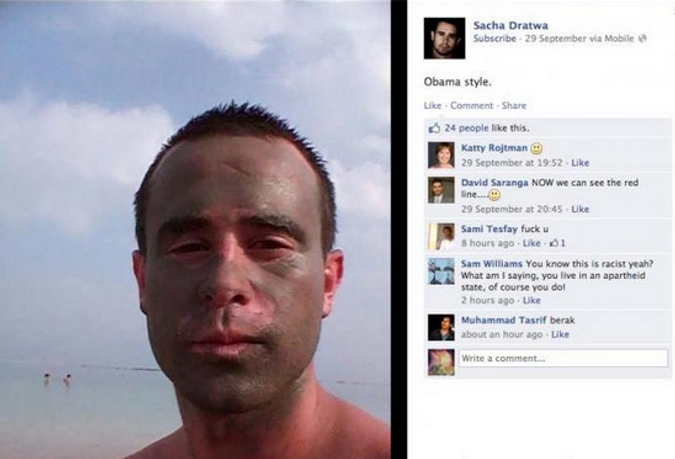 But serious questions have to be asked about why this blackface comedic gag exists at all. When the show “Shavua Sof HaHadash” sought to poke fun at Hamas in 2010, they did a skit involving the kidnapping of an Ethiopian IDF soldier. Upon realizing that their captive is Ethiopian, the Hamas members let him go because they believe Israeli society won’t trade anything for him. Before releasing him, they tell him, “Well, at least you’re not a Druze,” mocking another Israeli minority group. When the Ethiopian soldier asks for a ride back to the border, the Hamas men say, “But you people like to run, no?” All this is done with a white actor playing the Ethiopian prisoner in blackface, complete with a ridiculous wig and mock-Ethiopian accent. 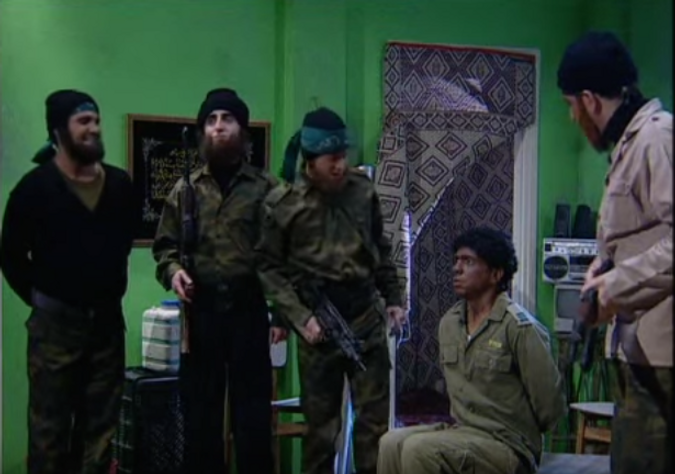 The tragic element in this skit is that there is a very real case now in Israel of an Ethiopian Jew named Avera Mengistu, who crossed into Gaza and whom the state is accused of not doing enough to bring home. On August 17 the family of Mengistu held a rally demanding that the state do more to bring him home, just as it did for Gilad Shalit.

The use of blackface is a convenient way for Israeli mass media to transmit racism through the paradigm of “comedy,” by normalizing stereotypes and humor against a minority group. It is part of the usual bag of tricks of comedians in Israel: Riff on Ethiopians, Druze, Arabs, Haredim, Moroccans, Yemenites. That’s the comedian’s easy way, to make fun of exaggerated stereotypes.

For all those who say this is just “politically correct” sensitivity, ask whether the same Israelis wouldn’t be offended by ham-fisted caricatures of Jews in Russia, China or anywhere else. Dressing up characters in “Jewface” — would that be funny? Constant berating of Jews for stereotypes like being cheap, or mocking their accents in European comedy like that of Dieudonne M’bala M’bala in France — would these things be acceptable?

It’s time to end the blackface comedic culture in Israel, and to demand diversity in the acting world. If Ethiopian actors want to “own” stereotypes against them, the way Jewish or black comedians have done in the U.S., that’s fine, even empowering. But let’s finally say “Enough!” to white people in Israel who color their faces on TV every time a “black character” is needed.

Seth J. Frantzman is a Jerusalem-based journalist and academic.