Donald Trump and the Danger of Scapegoating 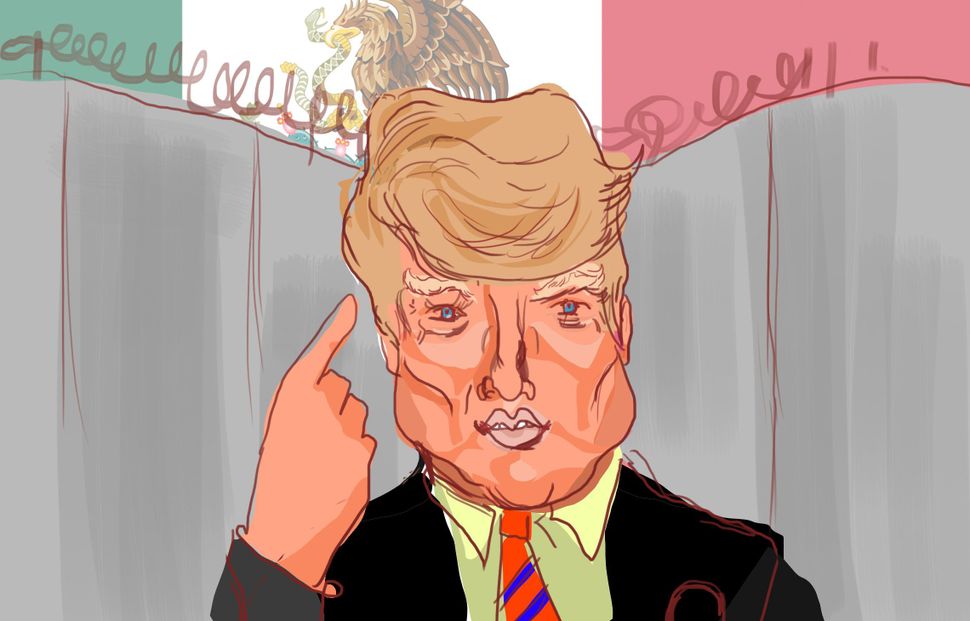 Recently a friend explained why she planned to register to vote for the first time in order to place her ballot for Donald Trump: “He’s good for the Jews.”

Almost all American Jews know the story of how their family came to America.

For many — usually the descendants of Eastern European Jews — their arrival was in the late 1800s or in the early 1940s. This is no coincidence. During the pogroms of the 19th century and immediately before the Holocaust, European Jews fled en masse. Those lucky enough to gain entry to America were also blessed with freedom of religion: a true luxury for those used to wandering from expulsion to expulsion.

One of these families was that of Jared Kushner, husband of Ivanka Trump, who is the daughter of “The Donald” (she went through an Orthodox Jewish conversion). Kushner’s grandfather is the child of Holocaust survivors. Donald Trump’s own mother was born in Scotland and immigrated after meeting Trump’s father on a trip to the United States in her teens.

Considering all this, Trump’s anti-immigration rhetoric is even more disturbing and incomprehensible. If the United States had had his immigration policies in place in the 1800s and in the 1940s, his Jewish grandchildren wouldn’t be here — maybe he himself wouldn’t even be here. Trump’s round-them-up-and-deport-them mindset, along with his aspersions cast on Mexican immigrants, is disturbingly similar to the slurs historically hurled at Jews and other newcomers. Jews were labeled con artists and thieves; Mexicans are, according to Trump, “rapists” and violent criminals. More than most, Jews should be sensitive to blanket denunciations of entire ethnic minorities by those auditioning to rule the world’s lone superpower.

But it’s not just about sympathy; it’s about self-interest, too.

My Trump-supporting friend, for example, sees in her candidate’s hard line on immigration not racism or nativism, but a genuine attempt to reduce crime and prevent wage suppression. She’s not alone; in an infographic produced by the GOP-affiliated polling company Echelon Insights on why Trump’s supporters chose him, immigration was the only issue visible among the personality-centered comments like “not a politician,” “honest” and “straight talk.”

In a column for the right-of-center online magazine The Federalist, Ben Domenech asked, “Are Republicans for Freedom or White Identity Politics?” He explains:

“Essentially, a sizable portion of the country is saying, ‘We want to stop illegal immigration,’ and both parties are telling them, in essence, ‘You’re not allowed to want that.’ Left to fester long enough, this frustration has moved beyond the point of an ordinary, partisan political controversy….”

Since Trump’s running essentially as an un-politician, it isn’t clear what he would actually do as president. But a hard line on immigration, especially along the lines of Trump’s racist rhetoric, isn’t good for the Jews, or for America for that matter. And the reason isn’t solely that a Trump victory would mean restrictive immigration policies — including his promised Great Wall of Mexico. It’s that a Trump victory shows the political advantage of singling out an ethnic group for mass guilt-by-association when a wealthy nation suddenly starts to run out of money — or jobs.

Historically, Jews should be, more than any other group, sensitive to attempts by candidates to pin every negative phenomenon in a nation on one particular ethnic minority. The problem of illegal immigration is an issue that can and should be addressed by both parties in the lead-up to the election, but Trump’s rhetoric is setting the foundation for a political world that would be made exponentially worse, not better, with a Trump victory.

This is not strictly a partisan phenomenon. On the left, Bernie Sanders, though supportive of legalizing undocumented workers, has significant qualms about the effects of further immigration on working class salaries. Meanwhile, other Republican contenders have a more nuanced view of immigration. During the first Republican debate on Fox News, Marco Rubio, himself the son of Cuban immigrants, told the audience:

Rubio should know: He risked the wrath of voters by shepherding comprehensive immigration reform through the Senate (only for the bill to die in the House).

It’s clear that Trump has tapped into this frustration. And much of that frustration is understandable, if at times misplaced. But Trump’s opportunistic demagoguery should be resisted. While Jews may be lured in by Trump’s no-nonsense attack on illegal immigration, we shouldn’t be fooled into thinking that the ethnocentrism would stop at the new Mexican Wall. More than any other ethnic group, we understand that placing blame for the state of a nation’s economy does nothing but instill and institutionalize rancor and hatred into a culture.

Bethany Mandel is a stay-at-home mom and writer on politics and culture, usually from a conservative perspective.

Donald Trump and the Danger of Scapegoating