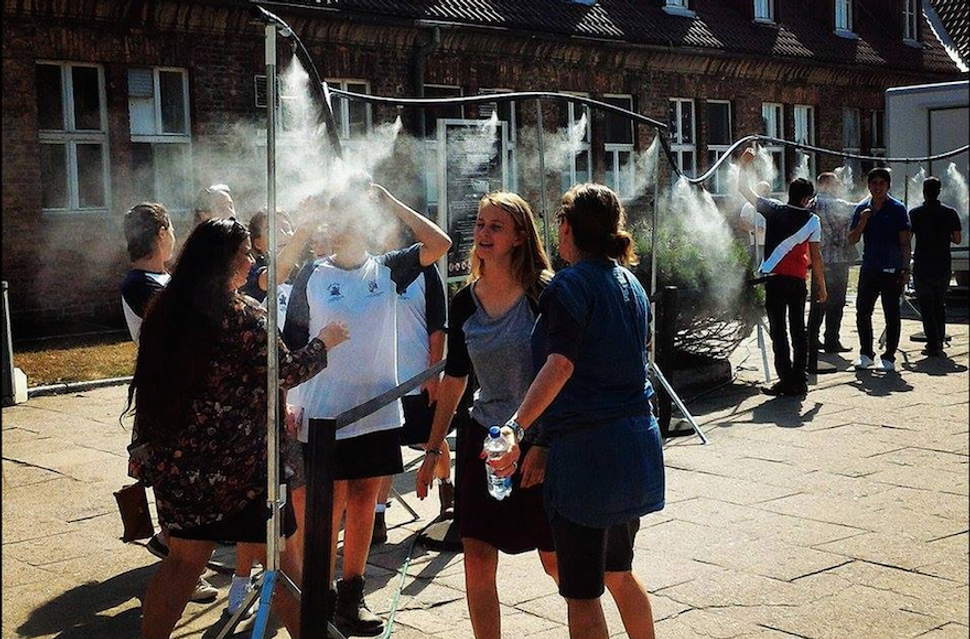 You thought selfies at Auschwitz were bad? Well, we can top that. Or at least, the caretakers of the Auschwitz concentration camp museum can.

Meir Bulka, 48, visited Auschwitz-Birkenau this Sunday and was surprised to see these showers, spraying mist at the overheated visitors.

Obviously, in the context of this specific concentration camp, showers don’t exactly have the best connotation.

As the granddaughter of Holocaust survivors, I am… disconcerted. And so was Bulka, who snapped some photos of the offending showers and complained to the camp administration.

“As a Jew who has lost so many relatives in the Holocaust, they looked like the showers that the Jews were forced to take before entering the gas chambers,” he told the Jerusalem Post.

Is Auschwitz-Birkenau about to become a water park? Are mere water coolers not enough?

Okay, so maybe somebody in the administration didn’t think about how showers were used to “exterminate” Jews with Zyclone B. Up to a million Jews were killed in the concentration camp, many in the camps’ gas chambers.

Showers at Auschwitz. Guess the facility manager would do that differently if he had it again. http://t.co/1RHyyeuaMX

Well, actually, no. Apparently the camp’s administration has no intention of removing the misters and, when probed about the resemblance to the gas chambers, they got all technical on the critiques, saying:

“The mist sprinkles do not look like showers and the fake showers installed by Germans inside some of the gas chambers were not used to deliver gas into them.”

I’m sorry, but the mist and shower combination makes it worse, not better in my eyes. After all, the mist of gas in a fake shower room was the last sight of many a Jew in Auschwitz-Birkenau.

I’m just going to go ahead and guess that the camp’s administration doesn’t get it. Many youths visiting the camp were probably refreshed and replenished by the mist sprayers, and hey, on many hot summer days I do wish I could walk by a cool air mister.

But just not at Auschwitz-Birkenau. I think it’s fair to ask the camp to be sensitive. And maybe it’s fair of them to decline that sensitivity. Many will no doubt chalk it up to willingness to make a buck off the Holocaust, but not to actually acknowledge Jewish trauma.

Yes, Poland is going through a particularly nasty heatwave, but are the cooling misty showers worth the heat of Jewish anger?