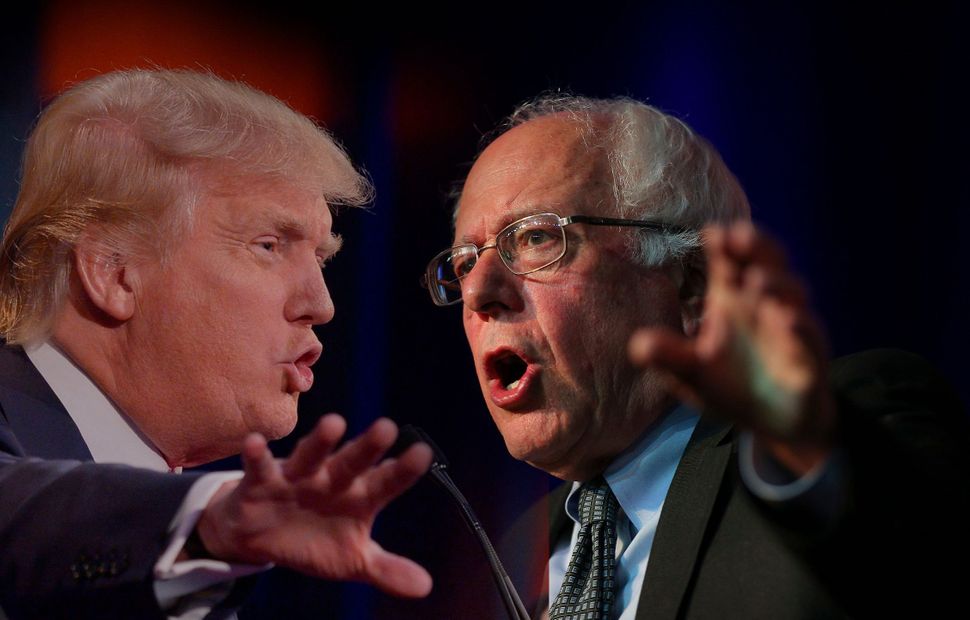 On one hand, it may be true that Sanders differs from Trump, as he told MSNBC’s Andrea Mitchell on August 31, in that he avoids “demagoguery” and “racist attacks” and tries instead to “talk about the reality facing the American people.” Trump would probably argue the point. He believes he’s talking about that reality. Still, their policy agendas are indisputably miles apart.

What their campaigns share, though, is critical to an understanding of the current presidential campaign. Both embody what could be a historic showdown between the respective parties and their bases.

Not that the two outsiders represent the same side in the showdown. Trump speaks for a Republican base that’s broken free of the traditional Republican message. Sanders represents a traditional Democratic message that’s long since been abandoned by the party’s base.

Trump represents the emergence in its purest, most distilled form of the new Republican base created by Ronald Reagan. They’re still fired up by the core message of Reagan’s first inaugural address in January 1981: “Government is the problem.” Trump takes that message and strips it down to its essence: They’re all stupid. They’re losers. I’m nothing like them. I’m great.

There’s no particular agenda there — not in the sense of a concrete plan for fixing the problems of average Americans. But that doesn’t mean he has no message. His message is as old as the classic populism of Napoleon Bonaparte and Julius Caesar before him: You got problems? Of course you do. Look at who’s running things. Follow me — I know how to do things.

The Republican establishment is frantic at the Trump phenomenon in large part because he represents something they created but can no longer control. For years they’ve been tapping into the resentments of struggling middle and working class Americans and directing them against the visible elites that seem to be in charge: The media. Government bureaucrats. Lawyers. Coddled minorities that benefit from the redistribution of your hard-earned tax dollars. Trump takes those resentments and turns them against all elites, including the GOP establishment.

That’s why the party leadership is scared. There’s no telling where this could lead. Perhaps his current one-fourth share of the likely primary electorate is his ceiling and most primary voters will reject his crude appeal. Perhaps he’ll win the nomination and then re-embrace the party establishment. Then again, perhaps he’ll win White House and govern alone, ruled only by his passions.

Sanders represents the same phenomenon in reverse. He offers a very specific agenda, essentially a revival and updating of the Democrats’ last winning agenda: Franklin Roosevelt’s New Deal. The Roosevelt agenda is still tops in the playbook of Democratic leaders in Congress and the statehouses, to the extent that they’re still capable of forming a coherent thought. But it’s long since dropped to the bottom of the screen for the cultural, gender and minority rights activists who make up the party’s core activist base. He wants an updated New Deal. The base wants a revised Civil Rights Act.

Roosevelt offered a modified version of European social-democracy, which is essentially what Sanders means when he calls himself a socialist. The New Deal provided modest guarantees of economic security at the bottom through social insurance, jobs programs and major public works. It protected unions, enabling them to achieve a measure of redistribution and economic equality by bargaining for it. It limited, through regulation, the worst excesses of banks and big corporations.

Roosevelt’s coalition couldn’t survive the revolutions of the 1960s and 1970s, though. The movement for black civil rights turned ugly and divisive, inflamed by violent resistance on one side and pent-up anger on the other. The sexual revolution, which emerged partly from the invention of the Pill, partly from the rise of the baby boom generation and partly from the explosion of feminism and gay rights, led to a deep, divisive war of cultural values. Between them the two revolutions, racial and sexual, cut through the heart of the American majority.

Perhaps the most important revolution, though, was the technological revolution we now call globalization. The invention of computers and satellite communications allowed American investors to manage factories in Malaysia without leaving their offices. The introduction of container shipping let them ship products back here for a fraction of what American wages would have cost them. Unions collapsed, along with worker bargaining power and any promise of economic equality. The Democrats had no answers.

The shift of the American political debate from economic rights to culture and identity meant the collapse of Roosevelt’s New Deal coalition. Democrats and Republicans in Congress continued battling over tax rates, regulation and public investment. At their activist bases, though, the Republicans became the party of the white working class — the South, heartland traditionalists, so-called Reagan Democrats — and the Democrats became the party of minority rights and cultural change, with lip service to economic justice as an afterthought.

Enter Bernie Sanders. For all his talk of Wall Street billionaires, he’s not really calling for a fundamental revolution. He’s essentially demanding that the Democratic party return to the principle it used to champion and still claims to believe in, that government can offer a square deal to the working majority.

In that sense, his challenge isn’t so much to the party leadership as it is to the activist and donor base. You can see it in the pushback he’s gotten from the Black Lives Matter movement. They complain that he doesn’t put minority rights atop his agenda. They’re right.

Sanders replies that he’s always been a staunch defender of minority rights. What he doesn’t say is that it’s not his main priority. He’s after bigger fish. He wants to recapture the white working class and return the Democratic party to its previous dominance. Implicit in that strategy is the unstated sense, radioactive but inescapable, that as long as Democrats insist on being seen primarily as the voice of minorities, the majority will continue to shop elsewhere. And that when that happens, the Republicans win and the minorities end up with nothing.

Sanders reportedly got some big cheers when he addressed the Democratic National Committee at its Minnesota meeting at the end of August. They seem to understand that he’s aiming not just to scratch out a narrow victory but to restore their majority status. What’s not clear is whether the majority he’s reaching for will flock to a Jewish socialist with a Brooklyn accent, or whether he’s simply energizing an FDR-nostalgic minority within the activist base.