How My Catholic Husband Became a Great ‘Jewish’ Father 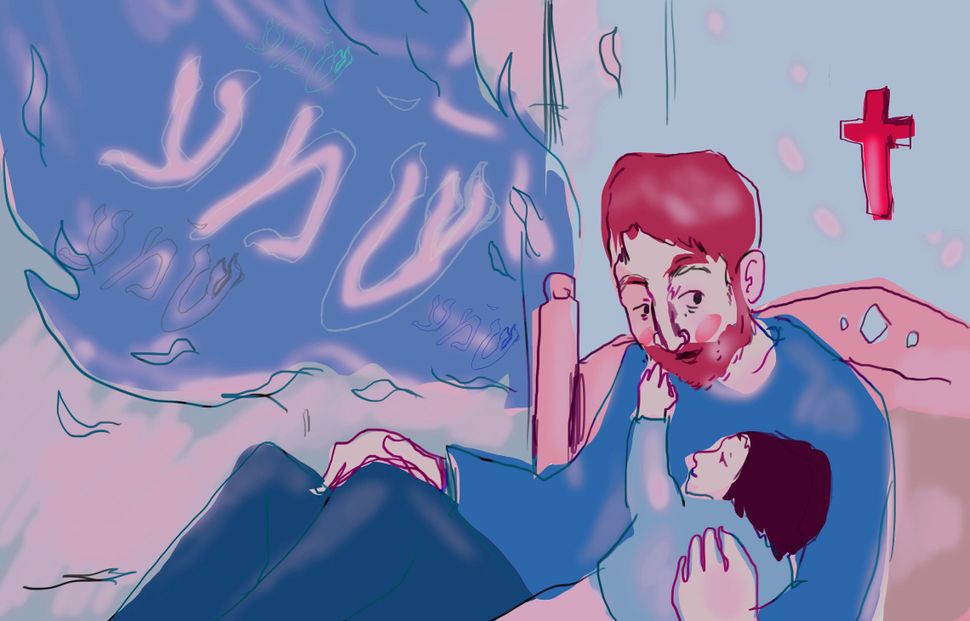 Worried bubbes everywhere, take heart: Just because your daughter (or son) is marrying out of the faith, all hope is not lost. Your daughter’s Catholic husband can still be a great Jewish father.

How do I know? Because mine is. While maintaining his Catholic identity, my husband has been a true partner in keeping a Jewish household and in bringing up Jewish children.

With my parents coming to visit us for the High Holidays and my menu planning underway, an outsider would think that we’re a run-of-the mill Jewish family and that he’s a run-of-the-mill Jewish dad. And in many ways he is.

He’s the one who always remembers to kiss the mezuzah on the way in, and he’s the one who meticulously cleans the old wax out of the Shabbat candles each week.

He’s the one who arranged our son’s bris while I was stuck in bed, and he’s the one who pesters our friends who have been dating for years but still aren’t engaged with a sprightly “Nu?!”

He’s the one who blesses the wine and the challah every week, and he’s the one who has to explain to his boss that he’ll be needing the High Holidays off from work.

And, yes, he’s also the one with the rosary in his desk.

It’s the only visible manifestation left of an issue that I once worried would be our downfall. I don’t worry anymore, but sometimes I check to see if the rosary is still there, as if it might magically disappear. I don’t think he’d even notice if it were gone. I imagine it’s like his college math textbooks that have been sitting on our bookcase untouched because that’s simply where they’ve always been.

But then I wonder if I’m wrong. I wonder if he looks at it and if it makes him sad, or guilty, or incomplete. I know that I could just ask him, but there are some questions you don’t want answers to.

At the risk of sounding like I’m cribbing from the Obama presidential campaign, our story is one that could only happen in 21st century America. I met my husband while we were both in college, at a Hillel “mix-’em-up” Shabbat meal. I was there to meet a nice Jewish boy. He was there to eat a delicious meal for free.

Both of us failed in our goals that night, but only partially. I met a nice boy, but the “Jewish” part had to be crossed off my list. His meal was just mediocre (it was catered by the school cafeteria service, after all), but he’s gotten quite a few delicious dinners out of the deal since our marriage. On the whole, I’d call it a win.

Over our three-year courtship, the question of religion was debated and discussed to death. Could he still go to church? (Yes, although he doesn’t anymore.) Would I ever come with him? (No.) Would I bake chocolate chip cookies if his church had a bake sale? (RIP, feminism.) Religion was important to both of us, but not a deal breaker for either of us.

I grew up as a High Holiday Jew. My mom and I attended services on Yom Kippur while my Dad fasted but stayed home and watched television. We chose services at an Orthodox temple not for their theology, but because they let us attend for free. The local Reform temple would have charged us a membership fee, which just wasn’t worth it to my parents for two days a year.

In many ways, my home synagogue would consider me a success story. I’ve become more observant than I ever was growing up, I’m active in my local synagogue, I bring my family to Shabbat services (yes, including my husband) and I learned to read and speak Hebrew fluently. We keep kosher. We count the Omer, we read the parsha, and we say morning prayers daily.

But on my wedding day, I wasn’t a success story. I was a failure.

The wedding pictures say it all: Every time the priest smiles, my father frowns. I don’t hold it against him.

We recently stayed overnight at my mother-in-law’s house, in the room where my husband grew up. There’s a cross next to his bed. If he has any overpowering feelings when he sees it, he doesn’t share them. He sits on the edge of that same bed and sings the “Goodnight Sh’ma” to our one-year-old, like he does every night.

And so, bubbes, you don’t have to go calling the caterers for that interfaith wedding just yet. But don’t go proclaiming that you’ll die of heartbreak, either. Your Jewish grandchildren will want you to be around for their bar mitzvahs.

How My Catholic Husband Became a Great ‘Jewish’ Father