5 Ways for Barack and Bibi To Get Along Better 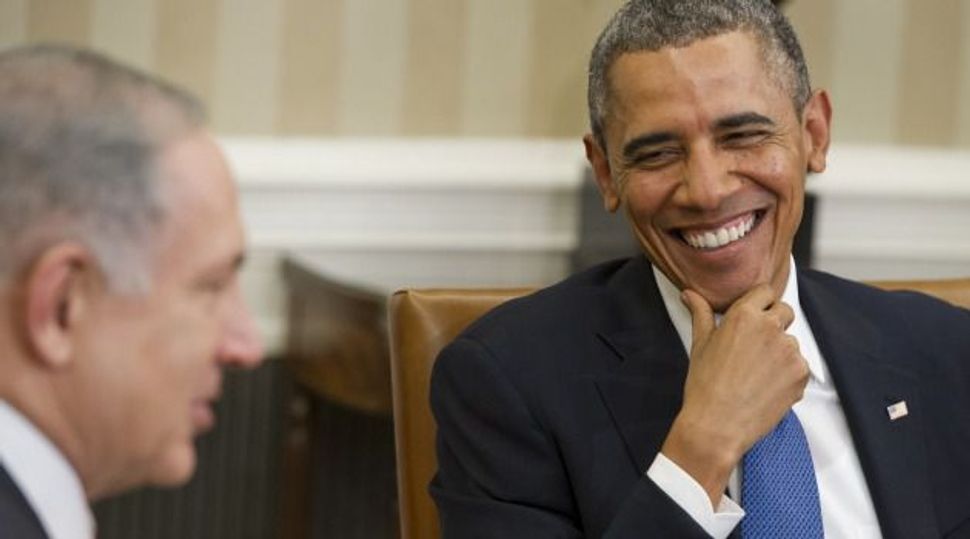 (JTA) — Now that enactment of the Iran nuclear deal appears to be a sure thing, the profound and often personal disagreement between President Barack Obama and Israeli Prime Minister Benjamin Netanyahu over Iran is not about to go away.

In the contemplative spirit of the Days of Awe, we canvassed the experts to recommend a way forward for the two leaders.

Stop the sniping and work out differences behind closed doors

However you come at the U.S.-Israel rupture, pointing a finger at Team Obama or Team Bibi — or blaming both — there’s a consensus: Stop the public sniping.

“Take a timeout,” said Joel Rubin, until recently a deputy assistant secretary of state and now president of the Washington Strategy Group, a foreign policy consultancy. “You maintain the security relationships and you intensify them, so the security officials are made aware of what’s going on and are confident. At the political level, I don’t know what you can do to change the dynamic.”

He added, “The Israeli leadership will have to make a decision to stop attacking Obama.”

“Both parties, the United States and Israel, should change the course of the direction of diplomatic relationship,” Reshef said. “Both leaders are mature enough to behave not just as politicians but as leaders. They have to get together behind closed doors to come to some kind of agreement to move ahead.”

Jonathan Schanzer, a vice president at the Foundation for Defense of Democracies, said there is little the Obama administration can do in the near term to assuage Israeli nerves rubbed raw by the perception that Obama officials sidelined Israel during the Iran talks.

“I know the administration has reached out to Israel to work together to combat Iran’s regional influence,” he said. “But the Israelis see the United States as playing the role of arsonist — and firefighter.”

A year ago, the one significant outcome of the failed U.S. effort to broker Israeli-Palestinian peace seemed to be creativity in the epithets that Israeli and American leaders were lobbing at one another.

Working together on peacemaking with the Palestinians as part of a broader regional peace may be a way out of the Iran-centered tensions, said Reshef, who heads Commanders for Israel’s Security, an assembly of former senior Israeli military officers who want Israel to advance a regional peace deal.

“The best thing for Israel, a kind of historical opportunity, is to deal with the mutual relationship with the United States on the one side and with neighboring Arabs on the other side,” he said.

In any case, a return to the Palestinian issue may be inevitable because of volatility in the Gaza Strip, said Tamara Cofman Wittes, director of the Center for Middle East Policy at the Brookings Institution.

“Israeli officials, both in the political establishment and at the security level, are concerned about the potential of another conflict,” said Wittes, who was a senior Middle East policy official in the State Department in Obama’s first term. “And there’s no military answer.”

U.S. and Israeli officials could come together in the twilight of Obama’s presidency and consider a way out.

“Is there a way to address the stagnation in Gaza in a way that can be a springboard toward Israeli-Palestinian reconciliation?” Wittes asked.

Schanzer said the United States could show good will ahead of the U.N. General Assembly in September by making clear that Washington would stop any attempt by the Palestinians to gain statehood recognition in the world body and by intensifying opposition to the movement to boycott Israel.

“That could help shore up support for Israel and let them know the United States is working with them on some key areas,” he said.

A key feature of the U.S.-Israel relationship has been designated buddies: two people who are each as close to their bosses as to one another, and who always pick up when the other’s face pops up on the smartphone.

That’s what Ron Dermer, the Israeli ambassador to Washington, was supposed to be when he arrived in the United States — Netanyahu’s right-hand man sent to forge close relationships with top Obama administration officials.

It didn’t work out, to put it mildly. Dermer, who without telling the White House worked with Republicans to set up Netanyahu’s speech to Congress in March, is seen by the Obama administration as a partisan. Dan Shapiro, his American counterpart in Tel Aviv, is well regarded by the Israeli political establishment, but is also seen as too closely identified with the Obama administration.

“That would be a perfect start, an additional channel to add some sanity,” said Goldenberg, now a senior fellow at the Center for a New American Security.

The Obama administration is pitching weapons upgrades throughout the region as a means of offsetting Iranian mischief, should the Islamic Republic feel empowered by the nuclear deal. Israel is nervous because although it, too, is due to get a bundle of goodies, it fears enhanced military capabilities among neighbors that in the past have been hostile.

“What you have now is an effort to arm the Saudis and other Gulf states,” Schanzer said, “but it erodes Israel’s qualitative military edge” — the U.S. policy of keeping Israel better equipped and prepared than its neighbors.

Goldenberg suggested collaborative regional efforts to combat terrorism and cyber attacks. Additionally, the Obama administration should show Israel it is invested in keeping Iran from arming Israel’s enemies, he said.

“Every couple of years Israel stops ships with Iranian weapons on them, and takes pictures and sends them out to the world,” he said. “What if the U.S. were to send those pictures? It would send a signal to the Israelis and embarrass the Iranians.”

Get over yourselves, there’s more work to do

The ongoing problems of the Middle East ultimately may be what forces back together the hard-heads who have fomented the U.S.-Israel crisis. The United States and Israel have common interests in Lebanon, Syria and across the region.

The U.S.-Israel relationship — one that is between stable democracies with a shared interest in fending off Middle Eastern threats — is larger than any differences between Netanyahu and Obama, said Dennis Ross, Obama’s top Iran adviser in his first term and now a counselor at the Washington Institute for Near East Policy.

“This issue is taking place in a reality where the region is in a place of turmoil and uncertainty, where the state system is under assault,” he said, referring to the Iran deal. “Whether it gets implemented or not, that remains true.”

5 Ways for Barack and Bibi To Get Along Better