No, God Is Not Punishing Jimmy Carter for ‘Anti-Semitism’ 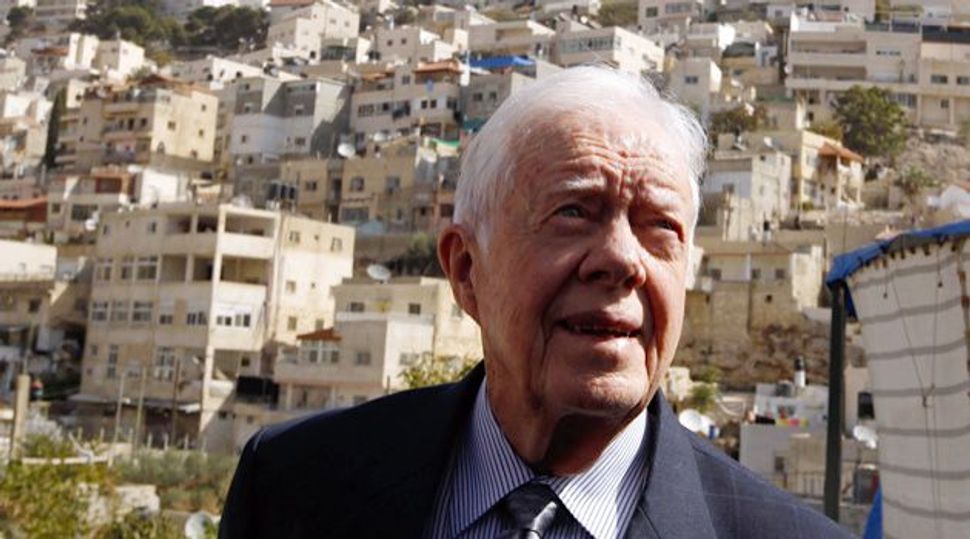 (JTA) — Former President Jimmy Carter, 90, recently announced he has cancer that has spread to his brain.

For some Jews (and evangelical Christians), the cause apparently is obvious. No, it’s not his genetic makeup, or the spread of a mass from his liver to his brain. It’s divine punishment for his behavior toward the Jews.

Not so fast, writes Rabbi Benjamin Blech on Aish.com, the website of Orthodox Jewish outreach organization Aish HaTorah: “Don’t presume to know that his illness is a result of his anti-Semitic views.”

Blech, an Orthodox Jewish author and professor of Talmud of at Yeshiva University, writes:

“There are those already proclaiming with prophetic certainty that Jimmy Carter is being punished by God for his sins against Israel and the Jewish people. Carter’s cancer is the divine edict for his anti-Semitism. And with that smug analysis of heavenly justice these false prophets have unwittingly besmirched millions of righteous and God-fearing people who similarly find themselves suffering from incurable diseases and facing painful deaths.

“Carter is not the only one dying from cancer. People in my own family were victims; pious and holy individuals I knew personally were targets of agonizing final ailments. But the Torah taught us not to dare make judgments based on equating someone’s suffering with sin and be guilty of the crime of the friends of Job.”

One can only guess how those who believe Jimmy Carter’s cancer is divine retribution are explaining the 90-plus years he has lived in relatively good health, trotting around the globe, selling books and maintaining a position of great influence.

No, God Is Not Punishing Jimmy Carter for ‘Anti-Semitism’