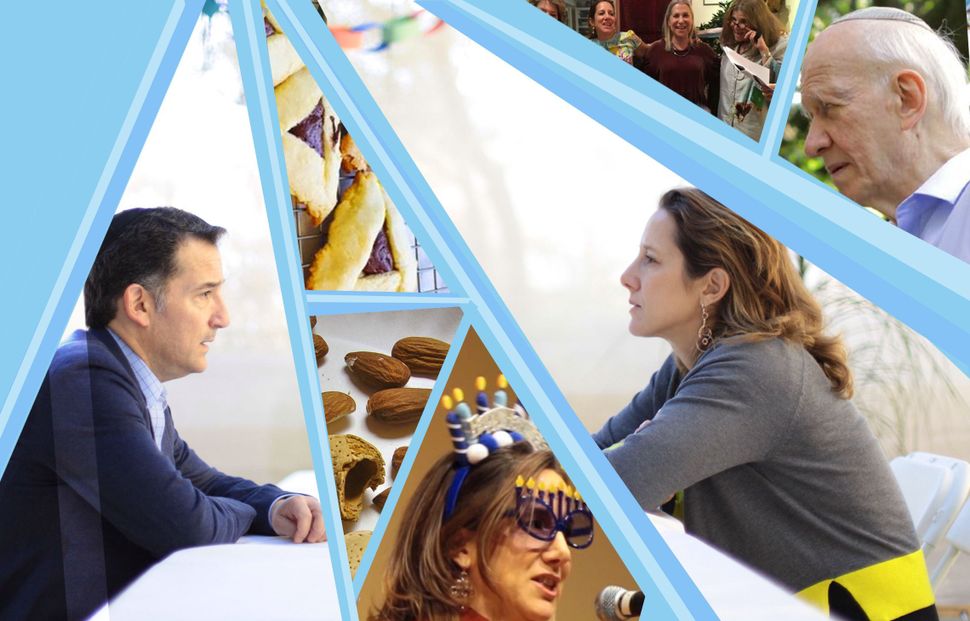 “Did it change you?”

That’s what people ask me, those who have followed this year of holiday reporting — my first foray into the complete Jewish calendar.

The answer is yes. And no.

Yes, because I now understand the substructures of every holiday — ancient and modern, mournful and exultant.

No, because I’m not rushing to fast six times again.

Yes, because the mindfulness it incited — an unexpected wakefulness — made me look harder at every priority, every relationship, time itself.

No, because I still get restless in long services.

Yes, because I now see the point of rituals I used to think were pointless.

No, because I still don’t see the point of many rituals.

Yes, because I was educated and encouraged by so many rabbis and paths to worship.

No, because I was happy (even relieved) to come home to my own.

After observing 18 holidays (actually, 21, but 18 is Jewishly neater) and writing 29 pieces (two about Shabbat) in which I quoted 44 rabbis and interviewed 30, plus 20 non-rabbis (writers, educators, etc.), I am moved, more than anything, by what our tradition imposes: Moments of intermission.

A demand to reach others in trouble. The rope pulling the ancient into today.

The reality is that most Jews in the world don’t observe every single holiday. I was new to the entire cycle myself. And though I cannot declare it to be life changing, I can say it was mind shifting.

Something intensifies. Like when my eye doctor gives me option “1 or 2” when he sets my eyeglass prescription, I suddenly saw option 2. The Jewish schedule heightened the stakes somehow -— reminding me repeatedly how precarious life is; how impatient our tradition is with complacency; how obligated we are to aid those with less; how lucky we are to have so much food, so much history, so much family.

I was honestly, maybe saccharinely, moved by mundanity itself — and its simplest joys — more than ever before. The small stuff got sweeter — in my normal, non-religious life: The way my daughter and son talk to each other when they don’t know I can hear them. The way something tastes after a fast. The sight of a delivery guy loaded with bags on his bicycle. My baby sitter’s loss of her brother in Trinidad. The ease of having my college friends at one table. I marked more. Paid attention. Lingered longer.

The holidays also made me feel sadder for the suffering. How many times in the Jewish cycle are we asked to remember those struggling? On Yom Kippur, on Sukkot, on Purim, Passover and all six fasts. It’s like a drumbeat of compassion: What are you going to do about those who are stuck, sad or starving?

Finally, there’s an arc to the seasons that interconnects them all — more sensibly, powerfully, provocatively than I’d realized. I hadn’t known the tie between Passover (when we were rescued), Shavuot (when we arrived at Sinai) and Sukkot (when we wandered before the Promised Land). Or the marriage metaphors — where on Passover, God loved us and saved us; on Shavuot we received the ketubah, the contract; on Sukkot we meet under the canopy, and on Simchat Torah we dance at our wedding, circling as couples do.

I felt carried through the year — in a sort of insistent current that calls all boats to the same port at the same time. That sense of concurrence was dramatic. We all showed up together. We all slowed down together.

And even though I failed at the most important holiday of all, Shabbat, (I couldn’t turn off all devices, no matter how many rabbis urged me to try,), I still managed to pause differently.

My head still spins with all the teachings (the interpretations are bottomless), but if I had to distill one flashpoint from each of the 21 holidays, it would be these:

And then it was all over. There was no trumpet chorus, no shofar blast. And I knew there was no cause for fanfare. For some Jews, marking all these holidays is simply living life. But it felt important to have hit every mark, and emotional to look back on all the readings and conversations that expanded the experience. So many people helped, advised, spurred me on (or gave me a zets — that’s Yiddish for “poke”). So, “Did it change you?”

Yes. I understand now why the scaffolding of Judaism has held up Jews for centuries.

Yes. Understanding a holiday makes me more likely to observe it.

Yes. I saw how the generosity of teachers can deepen and heighten a tradition.

But it’s all still muddy territory.

My religion expanded for me. Not my religiosity.

I feel more prayerful now. But I don’t think I’ll pray more often. I let my kids and husband off the hook; I wish I had nudged them to join me more often.

My Hebrew still sucks, despite the valiant efforts of my tutor, Joel Goldman.

I sometimes hid behind my reporter hat — meaning I used the series to justify being a newcomer or interloper when I should have felt entitled to show up just because I was born Jewish. The fact is that most places welcome anyone, but it’s harder than I thought to feel at ease when everyone else belongs.

Whatever my regrets, I know this expedition has made me grip blessings tighter. Something about having to say thanks so many times a year brought home how thankful I should be. And how wasteful my obsessions and frustrations often are. Nearly every holiday amplifies not just a personal gratitude, but also a larger one…

…That we get another day — not just to live more, but to love fiercely, too.

…That we gather repeatedly — to pound our chests in unison, eat in makeshift huts, cavort with Torahs, light menorahs, break matzo, read names or study into the dawn.

I won’t repeat it, but I won’t forget it.

And I’m sincerely grateful to those of you who came along.