What Shouldn’t We Compare to the Holocaust? A Refugee Crisis, for Starters. 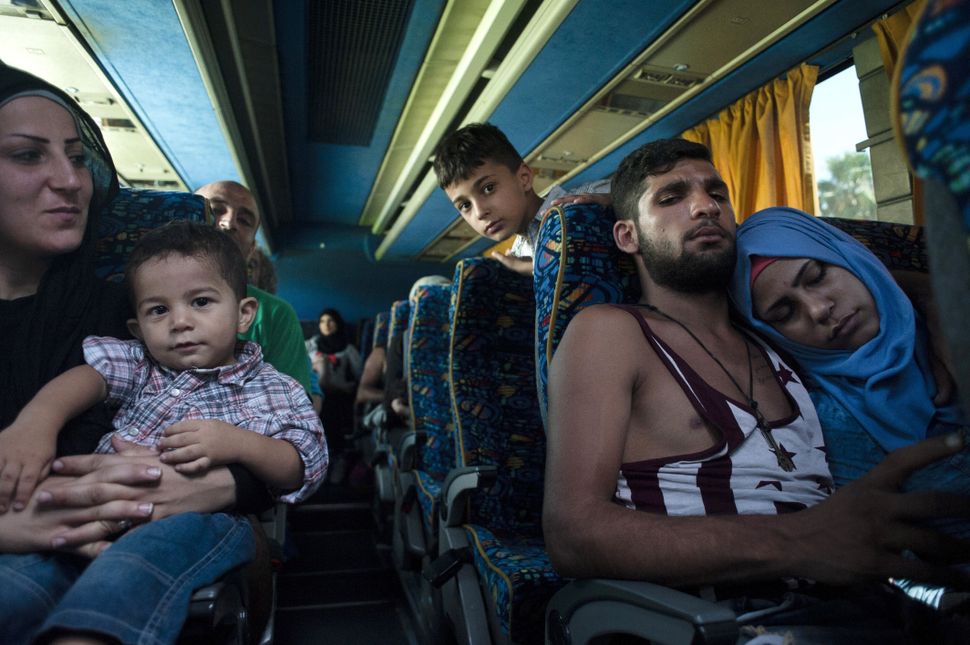 Even if we can’t agree on anything else, there’s one cardinal fact that I think we can all get behind: This has been a summer of intense drama where the Middle East is concerned. Also a summer filled with evocations of the Holocaust. And they’re not unrelated.

One reason for the intensity of the drama is that the Middle East really is a mess. Another reason is that, as noted above, we can’t agree on anything. We can’t even agree on what it is we disagree about.

Consider the Iran nuclear debate. One side argues that the agreement, flawed as it might be, is the best available alternative, that what’s needed now is U.S.-Israel cooperation to devise the strictest possible implementation. The other side says the agreement must be defeated because it’s flawed. The first side says, well, yes, we just said it was flawed, but regarding what to do next, let’s stipulate that reasonable people can disagree. The other side says, actually, no, they can’t — reasonable people can only agree with me; those who don’t are paving the way to a new Holocaust. End of discussion.

What’s the disagreement about? The flaws? The follow-up? Or the right to disagree?

There are other examples. Consider the European refugee crisis. As news cameras show a sea of humanity desperately fleeing the chaos of the Middle East and East Africa, op-ed pages and social media are filled with anguished appeals to the conscience of the West to live up to its values and responsibilities. As emotions swell, the bureaucratic chaos at Europe’s borders is made into a rerun of 1939, when the world shut its doors to Jews fleeing Hitler.

Let’s be clear: What’s happening in Europe is a humanitarian crisis of the first order. But it’s not genocide. It shouldn’t need to be said that the Holocaust was the determined effort by one of the world’s leading industrialized powers to murder all the world’s Jews in the course of a nearly successful effort to conquer the globe. Those Jews weren’t fleeing a civil war or seeking a better life.

Raising images of the Holocaust may help draw attention to the crisis. But it also shuts down reasoned discourse, and thus drowns out urgent questions that need airing — or worse, leaves those questions to the ravings of the far right. If the borders are opened wide, how many millions will want to flee the world’s no-longer-livable regions for the safe haven of a continent that works? Are we witnessing a historic population transfer that will alter the character of European civilization? The question isn’t necessarily bigoted; Germany’s chancellor, Angela Merkel, has openly cautioned that the refugees she’s admitting will change Germany in profound ways. What will be the place of Jews in the new Europe as its Muslim population surges? And how to deal with violent radicals — even a few are too many — who have surely piggybacked on the human floodtide entering Europe?

But in an atmosphere where every dinghy is the St. Louis, where refrigerator trucks smuggling migrants into Austria become boxcars transporting Jews to the gas chambers, where numbers thoughtlessly scrawled on refugees’ forearms in felt-tip pen by Czech police frantically trying to keep track of the human tidal wave are transformed into numbers tattooed on death-camp inmates — in such an atmosphere, there’s nothing left to discuss.

When we discuss Iran, Holocaust imagery is at once more plausible and more dangerous, more plausible because the regime has vowed repeatedly to eliminate the State of Israel. Even if, as apologists claim, they mean only to redraw the map so that there’s no longer a political entity called Israel, it portends mass Israeli deaths. Having a nuclear weapon would make this ambition infinitely more feasible. Would the regime use it, knowing that it would spell massive retaliation and the end of the Iranian state? Are they that irrational?

Israel’s prime minister, Benjamin Netanyahu, thinks they are. Accordingly, preventing Iran from obtaining a bomb is an existential issue for Israel, a matter of life or death. Any risk that they might obtain a bomb is a risk too great. And in his view, the deal negotiated in Vienna paves Iran’s path to a bomb. A decent deal would eliminate Iran’s nuclear infrastructure entirely. This deal threatens Israel with a nuclear holocaust. The six powers’ consent to it is, he’s often said, a replay of Europe’s capitulation to Hitler in 1938.

There’s been a lot of hand-wringing this summer over the Nazi epithets directed by hawks at supporters of the Iran deal. Much less attention has been paid to Netanyahu’s role in the ugly talk. Once you’ve introduced Holocaust talk, all that remains is to identify perpetrators and appeasers.

If Netanyahu’s assumptions were unquestionably true, the extreme rhetoric would be entirely justified. But his assumptions are questioned by virtually the entire top echelon of Israel’s security establishment. They maintain publicly — in interviews, speeches and official documents — that Iran’s leadership is rational and doesn’t pose an “existential threat” to Israel. They insist Israel can defend itself. Most believe that the nuclear deal, though flawed, can be tweaked by working with the White House. They believe Netanyahu’s frontal challenge to President Obama was a mistake. Israel’s alliance with America is its most important strategic asset, bar none. Undermining the alliance is more dangerous than any regional threat.

Given all that, here’s the mystery that’s consuming Washington and Jerusalem alike: Why did Netanyahu do it? He couldn’t win. His intelligence community deemed the alternative manageable. Why go to war against the White House?

There are two main theories. One is that he simply believed the issue was too important, the stakes too high and his generals clueless. The implications of the deal were so catastrophic that all means of resistance were justified.

The other theory says Netanyahu got what he really wanted from the battle: He solidified his alliance with the Republican Party and drove a wedge between the Democrats and the Jewish community. He has no faith in Obama. He’s betting that the Republicans will hold Congress and possibly regain the White House.

According to this theory, Netanyahu doesn’t trust liberals one bit, whether American or Israeli. They’ve forgotten the lessons of the Holocaust. They’re blind to real threats. Anyway, they’re assimilating and intermarrying into oblivion. Offending them wasn’t an unintended byproduct of the battle, it was a primary goal.

Iran? Israel can defend itself. Netanyahu told Italy’s premier on August 29 that he has no problem with an Iranian civilian nuclear program. Sure, reasonable people can disagree. Just be careful who you call “reasonable.”

What Shouldn’t We Compare to the Holocaust? A Refugee Crisis, for Starters.