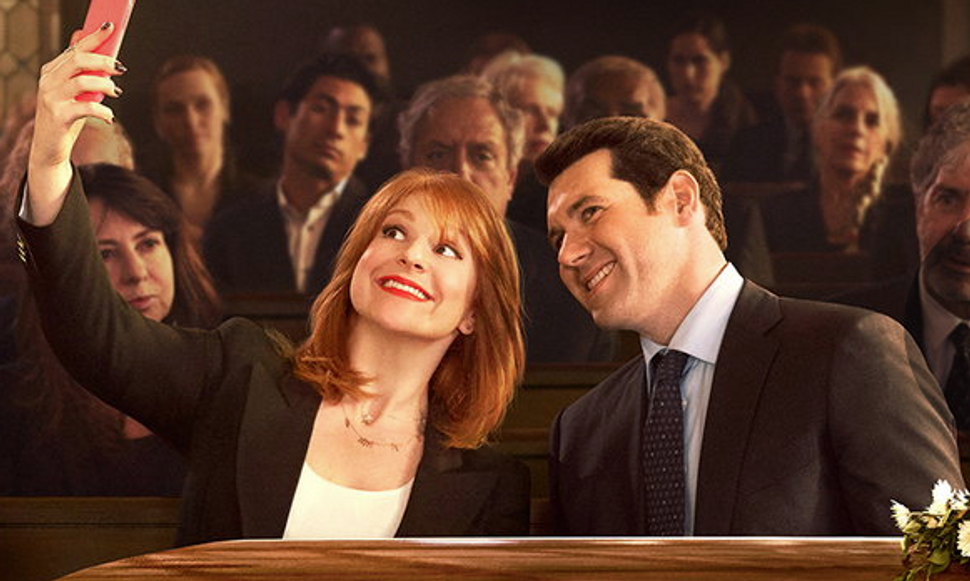 When “Curb Your Enthusiasm” began its indefinite hiatus four years ago, it seemed like the end. The end (perhaps temporarily) of one of my favorite shows, and then end of a golden age of Jewish comedy. Yes, there would continue to be Jews in comedy, but the phenomenon of the Jews using Jews as fodder for punchlines would fade. After a century of assimilation, we’d lost our outsider edge.

As a Jewish person who has taken great pleasure in laughing at Jewish people, this ending wasn’t something I was going to take lightly.

So you can imagine my relief when “Difficult People,” Hulu’s new show about aspiring comedians, starring Billy Eichner and Julie Klausner, premiered in August. The comedy went far beyond its anticipated role of summer placeholder; it single-handedly proved that Jews are still to be laughed at — not just with.

There were other signs, sure. An episode of “Broad City” from last year featured Susie Essman as Bobbi Wexler, Ilana’s very Jewy Jewish mother who maintains a world order in which manicures are afforded the same amount of ritual as sitting shiva. (Let’s just say I’ve known a few Bobbis.) And then, of course, there was the return of “Wet Hot American Summer,” Netflix’s 10-episode prequel to the cult film about a day in the life of a Jewish summer camp. Among its many contributions to popular culture, the series gave us all the gift of the “shofar dick sword fight.” Rosh Hashanah can never be the same.

“Difficult People,” though, is what finally convinced me that Jews mocking Jews can still be cutting edge. On the show, Eichner and Klausner play, respectively, Billy Epstein and Julie Kessler, two aspiring comedians trying to break into showbiz. Like “Seinfeld” it’s not that they do much in the way of Jew-specific activities so much as that there is a whiff of Jewiness in everything they do. Unlike “Seinfeld,” they make these Jewish roots explicit. (On “Difficult People” George’s last name would have been Cohen, not Costanza.)

When they talk about opening up a restaurant, Billy claims they can be the “Jewish Mr. Chow.” He explains that he never learned how to do handy work because his “Father is dead and when he was alive he was Jewish.” When ranking repulsions he inquires, “What’s more of a turn-off, veganism or Judaica?” Really, there’s so little of their lives that isn’t somehow affected by their Jewish upbringing.

The most conspicuously Jewish episode to-date takes place on Yom Kippur. Billy goes to the house of his more observant brother, Garry (Fred Armisen), and the whole experience is a drag. Following the inevitable bagel-shmeared blow-up, Billy tells his brother: “Here’s the thing. You know what the holiest day of the year for me is? The Golden Globes.” His niece’s reply? “That’s the most Jewish thing I have ever heard.”

“This is a tradition now. Many Jews have a strong Jewish identification that is rooted in an obsession with pop culture. This show perfectly demonstrates how this works,” New York Times comedy critic Jason Zinoman explained to me when I asked whether the Jewish punchline is still funny. Sure, Jackie Mason’s, and even Woody Allen’s, Jewish humor might feel dated, but this generation of Jewish comedians is coming up with new ways to assert Jewish difference. Eichner asserts it by donning the American Jewish mantle of pop culture obsessive.

Zinoman said the new Jewish vanguard of Jewish comedians succeed because these comedians have managed to hold on to outsider status. This is done in the old, familiar ways as well as in new ones.

In the older category we have the recognizably Jewish Jon Stewart-esque penchant for argumentation combined with our long-running fetish for irony. Nurture or nature, the Jewish trait that makes us love calling foul or highlighting the absurd seems to be rather impervious to assimilation. And in the newer category we have the establishment of difference not between Jews and non-Jews, but between different types of Jews. Cultural Jews, tikkun olam Jews, Religious Jews, Zionist Jews. There are a lot of different people identifying themselves as Jewish in a lot of different ways. Comedians seize on these differences, mining the distance betwixt and between for a laugh.

“Curb Your Enthusiasm” worked in a way similar to “‘Difficult People.” Both have characters who position themselves as cultural Jews in opposition to their more religious relatives. It’s a brilliant way to reassert the outsider status,” Zinoman told me. Fifty years ago, Jews were the outsiders among non-Jews; today we can be outsiders among ourselves.

This 21st-century recalibration of the outsider Jewish status isn’t good for just Jewish comedy, it’s also good news for the Jews: both for those who identify solely on the basis of culture, not religion — including the 42% who said having a good sense of humor is essential to their identity, as well as the 20% who identify as “nones” of the 2013 Pew Research Center study — and those who believe that such an identity represents a death knell for our ancient people.

For many in the Jewish establishment, the cultural Jew is a thing to be feared. The concern over these “bagels and lox” Jews, as they are often called, is that their identity isn’t rigorous or well-defined enough to have any staying power. It’s a legitimate concern — one no doubt heightened by the Pew study in which 62% of us said “being Jewish is mainly a matter of ancestry and culture” — considering that the pull of a single culture is more attenuated than the proscriptions that define a religion. (I, for the record, consider myself a dual citizen of cultural and religious Judaism and respect their claims for autonomy from each other.)

Does the ongoing relevance of the Jewish punchline offer us a guarantee that the cultural Jew will live on in perpetuity? Wouldn’t that be nice. Nevertheless, it does tell us a whole lot about the strength of the cultural Jewish identity today, roughly 150 years after we began living among non-Jews. There is still, undoubtedly, a there, there — a feeling of Jewishness whose authenticity is big and deep enough for all those so-funny-because-it’s-true punchlines to land on. Cultural Judaism is proving to be far more flexible than Allen’s oeuvre. It is a tradition fueled by affection and a sense of community, an identity that, yeah, someone like Eichner could shed, but why would he want to?

We expect religious Judaism to reinvent itself. We think this because it always has. Perhaps this renaissance in Jewish comedy should give us cause to believe that the post-assimilation variety of cultural Judaism has the capacity to do the same.